A programming note before the weekly round up. If you take a look at the navigation bar above you will notice a few new pages have been added to the site. You can now track my week to week trading performance on a closing basis. I plan to begin including more details over time, such as to the top winners and losers for that specific week and some win to loss ratios and percentage statistics to follow.  Also new is the videos page, which will begin to populate with recorded live trading sessions and trade ideas over the weeks to come. In order to access the videos page you will just need to create a username and password to obtain a site membership (completely free). This brings me to the memberships page. Here you can sign up for the free site account and also subscribe to two paid memberships I am currently offering, real time trade alerts and 1 on 1 mentoring. My last note before we get into the charts. I will not bombard anyone with sales pitches or discounts to sign up for any paid memberships. Create a free login, watch my videos, track my performance, if you like what you see and want to discuss anything then send me an e-mail otherwise just sign up.

$SPY we saw a price breakdown from a 24 day head and shoulders 3 point wide topping pattern. The neckline of the breakdown was 168, the top of the head at 171, and if your a believer in price pattern measured moves then the projected target of this breakdown should come in at 165. We already came close to that target Friday afternoon where we made a low of 165.50. So coming into next week the trend is absolutely down as we ping pong lower in this descending channel. I do tend to agree with that projected measured move target down to 165 and I would expect buyers to start stepping in on any further thrusts lower in the market. However, until we see more signs of firming price action with developing bases I will wait patiently and reduce my trades to scalps.

$AAPL monster breakout higher this week despite the apocalyptic price action in the overall markets. Apple launched strong right out of the gates Monday morning trending higher nicely after the patent ruling was overturned in it’s favor. Last week’s price action was pretty gross and it did exactly what it needed too in order to shake out weak longs and suck in the aggressive shorts which is what really gave the legs for this to put in a 50 point upweek. That’s right. 50 points. But the real juice wasn’t put on until Mr. Ichahns afternoon tweet on Tuesday describing his recent stake in the company. An acceleration of the uptrend and a blast over the 500 level. Looking into next week this name is still looking pent up for another move to the upside. Buy momentum has returned in this name, at least for now. Look elsewhere for your short ideas, this is not one. 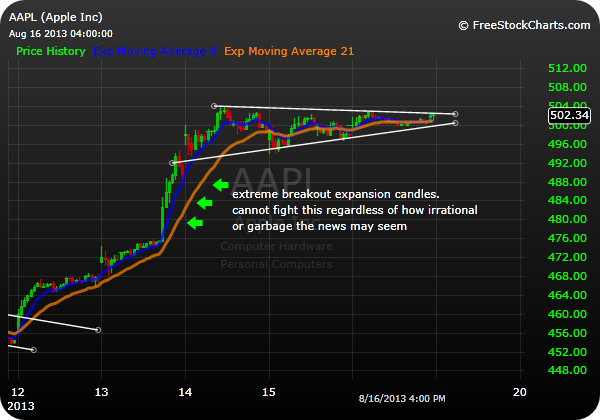 $GOOG no change in character here, the downtrend continues. We can see the price action tightened up a little towards the end of the week which might be signaling early signs that these levels could attract some longer term players in Google. From a day trading standpoint the trend is lower and we should not look to fight it. For longer term swing players, It’s hard not to be interested in Google here after 50 points of downside in a few short weeks.

$NFLX overall held in this week pretty well. It had a real sneaky ugly day thursday that was enough to shake me out of my swing long position but then you saw a nice comeback on Friday. Overall this name closed at the midpoint of it’s weekly range and given the way lots of other stocks ended up this week Netflix outperformed nicely. I continue to like this name to the long side and believe dips should continue to be bought. 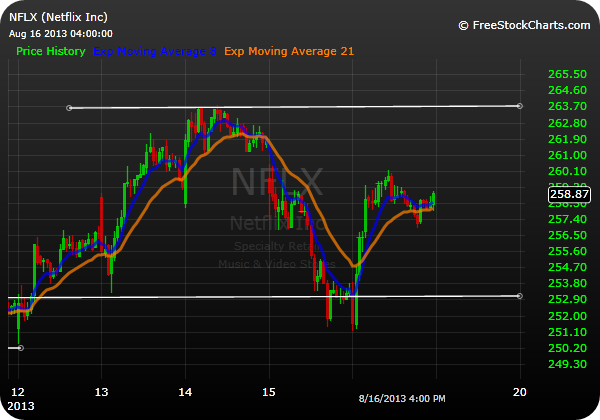 $FB finally taking a stand here after selling off 3 dollars from the highs put in at $39 just a couple weeks ago. We now have a reference point to begin measuring price against and $36 on the dot seems to be that level. Facebook defended it’s gap higher on Friday so that gives us our second reference point at 36.90 to measure price against. I wouldn’t be surprised to see the gap tested and it even seems likely that it gets filled but regardless this will be one of my top vehicles to the long side in the coming week if it can continue to show constructive signs of accumulation at these levels. 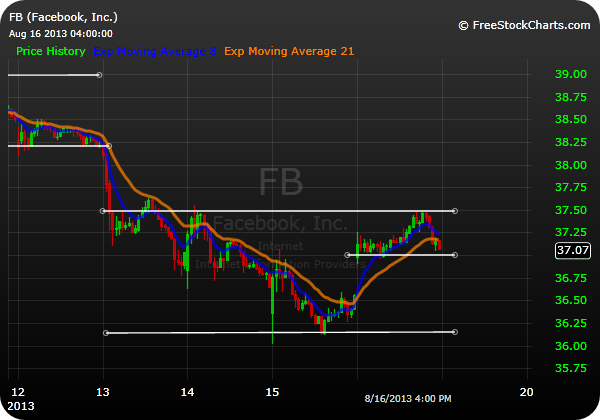 $AMZN my thought process here on amazon is very similar to Google. The story hasn’t changed one bit in Amazon this week, the trend is still clearly down. From a daytraders stand point all setups should really be shorts or just neutral and flat. However from a swing traders standpoint it’s tough not to be interested in Amazon as it is now some 30 dollars off it’s highs in a stair-step fashion lower. Still in wait and see mode for any long day trades however I did pick some Amazon long up in my swing account at the close 285.24 fully aware that I could be a week or two early to this party.