$SPY so after a week of high beta growth names getting pulverized here the $SPY stands holding above 184 support and last weeks lows. Thats impressive in itself that many of the momo leaders suffered 5%+ sell offs across the board yet the indices remain resilient above upper level horizontal support (so far). While the prior leaders may be in short/intermediate term downtrends the way the indices are acting does lend itself to the idea that money seems to be rotating, namely to utility names, energy plays, etc. and not fleeing the equity markets in general. And I am sure others would make the argument that the sell off in growth names is a pre-cursor to what is to follow for the rest of the market. I tend not to put much weight towards these lines of thoughts and rather just objectively follow price. If we turn our attention to the charts we can see that price is still respecting 184 support. This is the same exact chart I posted last Sunday for the $SPY and I really don’t think anything has changed. This is still a potential topping pattern as much as it is a continuation pattern and until we see some real resolve above 187 or below 184 I think its anybody’s guess. I do believe the stakes at this 184 support level have greatly increased from last week to now and I think that is the most important level to have on your radar next week. As I suggested last week, don’t over analyze this choppy market and its advisable not to have large positions one way or the other. For my own swing account I do have some light longs on with small position size, but overall i’m pretty neutral in the here and now.

$AAPL showed some great signs of strength early in the week as it was bucking the overall market trend gapping up nicely on Monday and continuing nicely into Wednesday before giving back the 2 and a half day advance toward 550 and closing just about where it started the week. 534.50ish level is an area I have had drawn on the charts for a few weeks now and it’s no surprise the market is trying to find some support here. Below 534 and we possibly roll into the larger 515 – 535 range that we chopped around in since the end of February. Early in the week I picked up some calls for a swing but by the end of the week I had cut them loose. I wanted to see more commitment and 540 to hold to keep me involved. Neutral here with a slight bullish bias, lets see what next week brings.

$GOOG continues to struggle in this down trend falling lower in search of support. Lots of horizontal levels of interest to watch here but the bottom line is we need to see the bulls begin to stabilize Google and start forming a healthy short term base before getting too interested on the long side. Prior leader under pressure, give it some time to work this selling off or join in on the short side and sell new momentum breakdowns. 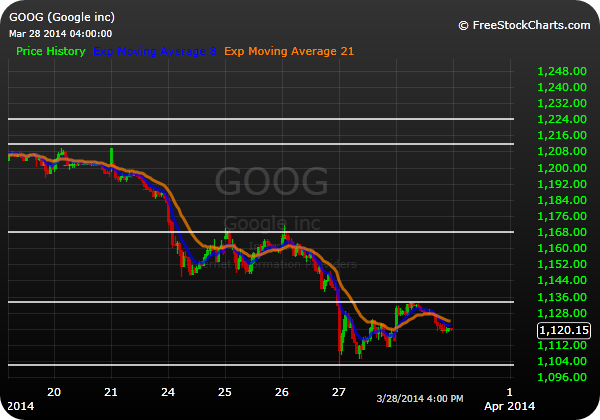 $NFLX leading the growth names to the downside and has fallen 100 points within the last 3 weeks. When you look at the daily chart you can see this massive earnings gap dating back to the start of this year still half unfilled and Friday’s closing price of 358 puts us square in the middle of it. Very orderly bearish channel Netflix is trading within short term and perhaps we may need to fill the gap before any real intermediate reversal begins to take shape. A name that has covered alot of ground real fast. I wouldn’t be surprised to see it frustrate both the bulls and bears around these levels for some time.

$FB like most of the other growth names Facebook is still struggling to stabilize at lower prices. Facebook on a daily/weekly closing basis probably shows the best signs of at least a short term bottom but we can see when looking at a 30 minute chart it could still use plenty of back and filling around these levels to put in a proper bullish reversal base. Originally I had picked some Facebook up for my swing around $59.80 on Thursdays reversal but I ended up selling it off on Fridays afternoon sell off for a small gain. Just needs more time but I’ll be watching it closely for continued signs of stabilization. 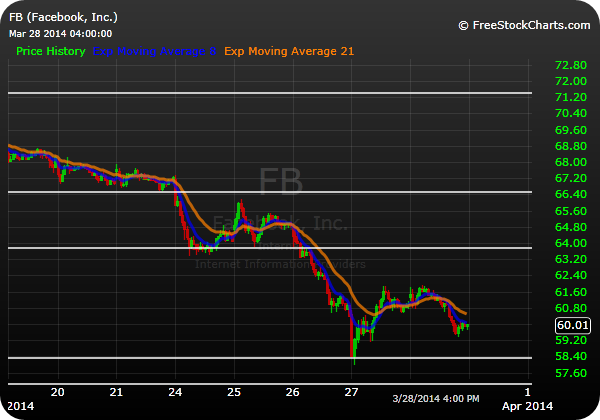 $AMZN first of the basket of momentum names that I follow to test their 200 day simple moving average. We identified Amazon snapping support last week as it seemed to front run some of the carnage that was to ensue on the market. 340ish level was where Amazon found support on their prior earnings release sell off and we can see we’re pretty much trading in that zone right now. Needs more time to build a healthy short term base, still an avoid for me.

$TSLA not just tech stocks, nearly all growth names got hit this week and Tesla was no different. Slightly more orderly than many of its counterparts, not as deep of a sell off on a percentage basis, and also longer term trend lines still have not been violated in Tesla. This is a name I “bottom picked” a bit in my swing account and one that I still own into the weekend. 207 in change was the entry price as it began to stabilize on Thursday’s session. It still looks like this name needs time and my position size is small enough to comfortably endure sideways action. I’m fine with this cutting this loose next week if it doesn’t act well, simply trying to tactically pick some spots with light position size among the carnage. 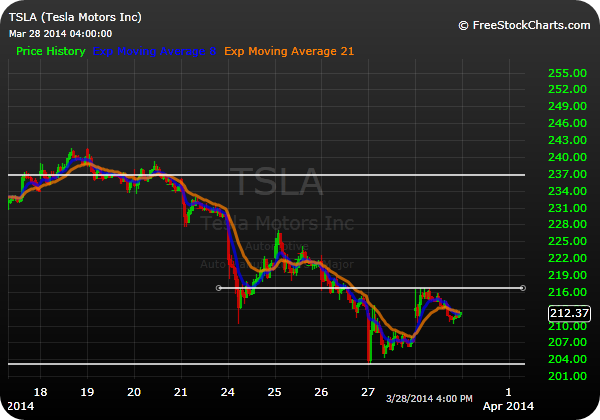