$SPY we’re finally seeing some signs of cracking this week as the market fell through an area that has been holding as support since April around 208. Over the past few weeks we’ve identified some of the mixed signals the markets has been giving us (mainly leading and lagging sectors and diverging market internals). And given this weeks action it looks like price is finally starting to feel the effect of some of those headwinds. In the near term the bulls have staged a small 3 day bounce back into the breakdown level and declining fast moving averages. Heading into next week it will be interesting to see if we can maintain those gains and perhaps even build on them, although looking at the circled action on this chart it sure looks like a bear flag in the making. We won’t know for sure until we see this week’s lows taken out at 205.28 and if we do break below 204.50 we could really be in store for some acceleration to the downside given the breakdown of multiple levels of support.

Overall the action is painting a neutral to bearish bias in the near term until we can get back above 208 and hold for a couple of days. Our exposure continues to be very light and members have managed to avoid much of this downside action and even find some pockets of opportunity. Earnings season is not that far away so be aware of your holdings and prepare for some new headline risks. 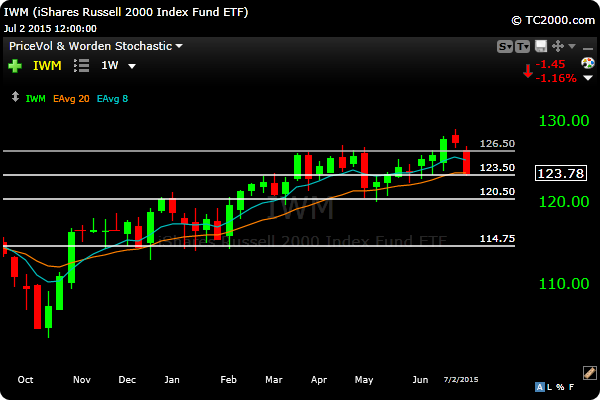 $IWM here’s a weekly chart of the small cap ETF and while it ended the week down 2.92% we can see there’s no technical damage yet on this timeframe and the uptrend remains firmly in tact. We closed right on the 20EMA and at an area that the market has spent some time chopping around in the recent past. The IWM has been one of the leaders this year so a breakdown here might be what we need to see happen if the bears are to get any real traction with a potential correction. 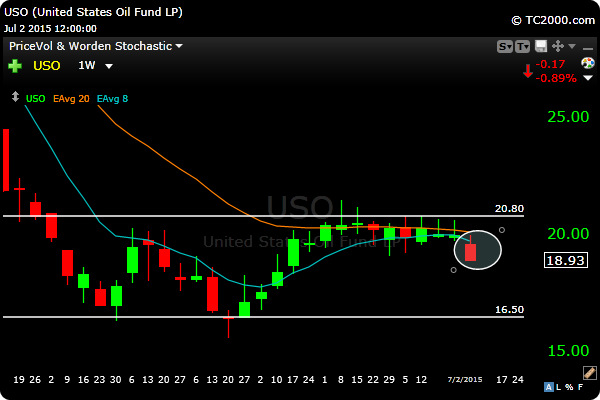 $USO is one that finally saw volatility contact and a sideways range develop for the past few months but after failing to get traction above $20 it looks like a roll over in the making after this weeks close on the lows. The longer term trend here is sharply lower and if we see continuation to the downside next week then the lows from March are a likely target for this market. Members and I got short USO for a trade on Friday and we’re looking for lower prices. 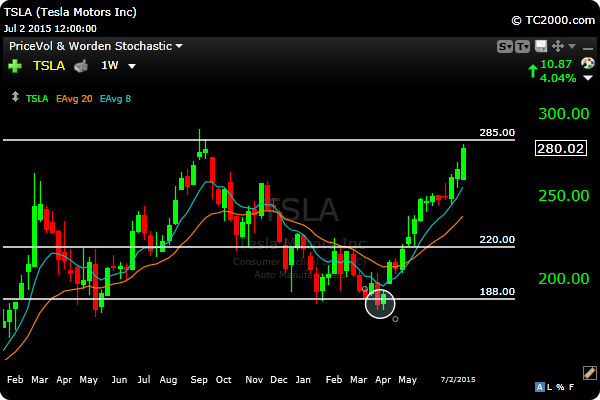 $TSLA this has been charging higher ever since it put in that pivot piercing underneath support at 188 back in March. As we’ve mentioned before on recent video recaps this one has been hard to get on board if you missed the earlier entries. It seems like tagging all time highs is the destiny for this one in the short term and so the chase remains on here and it’s showing no signs of slowing. 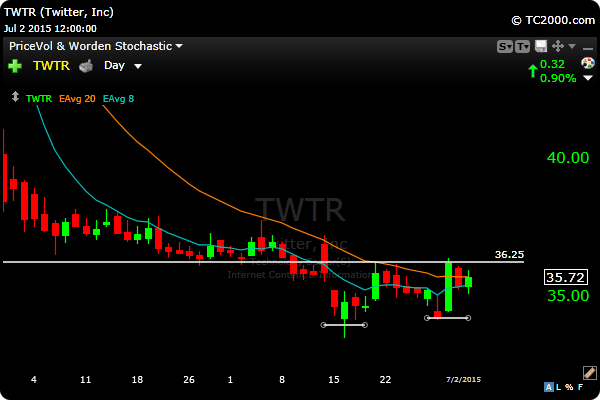 $TWTR outperformed nicely this week closing higher 1.30% and finally showing some signs of life by the bulls. This one has been in the penalty box ever since reporting earnings last quarter slowly grinding lower. It looks like we may have made a double bottom higher low this week but we’ll need to see the bulls take charge and take out resistance (36.25) in order to confirm. I’ll be watching this overhead level potentially for a quick momentum trade.