bears fire a wake up call across markets

$SPY the table was set this week for the bulls to continue their march higher and challenge some key resistance at 211 coming into this week. Unfortunately for them, after failing to close at or above resistance on back to back tests we got a swift move lower on Friday’s session. We gapped lower and sank for the rest of the day breaking back below 209 closing off the lows, but still well within the prior 204.50 to 209 range. The move on Friday was a bit concerning to me given how broad the selling was. Take a look at the McClellan Oscillator which tracks the number of the advancing & declining stocks.

We broke back below the key 0 line which traditionally signals bearish behavior for the period to follow. Also notice the magnitude of Friday’s drop in the McClellan, nearly a straight line down 100+ pts. It’s been my experience when you have a swift move in the McClellan combined with price action moving off a level of significance (211) it typically means we’re closer to the start of that move / new direction than we are near the end of it. Now this doesn’t mean I’m full on hardcore bear right here; I’m simply recognizing that Friday’s session was a day to take notice. Ultimately I want to remain careful on the long side until this damage is repaired. The longer we stay below 209 with the open gap in tact the more risk the bulls have that this market will continue to chop around or roll over. Going into next week let’s be on alert to see if this was just a single day shake up or if more follow through is to come.

$IWM similar to the $SPY everything was slow and steady higher until Friday’s session. We’ve seen some long tails intraday over the past couple weeks as the bears try to get going intraday but can never quite seal the deal into the close. But Friday we saw a slight change in character as the high level trend-line of momentum was broken and we closed down on the day over 1.5%. Technically there hasn’t been real meaningful damage just yet, simply a pause in the uptrend with signs of more range bound behavior between 123.50 and 126.25. If however, over the next couple days we do break below 123.50 and take out the prior pivot low around 122 that would signal some further uncertainty or downside action to come. But for now, let’s keep an eye on 123.50 to 126.25 and see what we get next week.

$QQQ we now have 3 well defined lower highs after each successive re-test of the highs. Big picture, this can be seen as healthy consolidation over a multi-week (multi-month) time period but we also need to keep on watch the damage does not get any worse. The positive note is that the $QQQ much like the $IWM is still above it’s recent breakout level from 105. Bottom line, the bulls had a chance to continue higher this week but the ball was dropped. Let’s see what becomes of it. 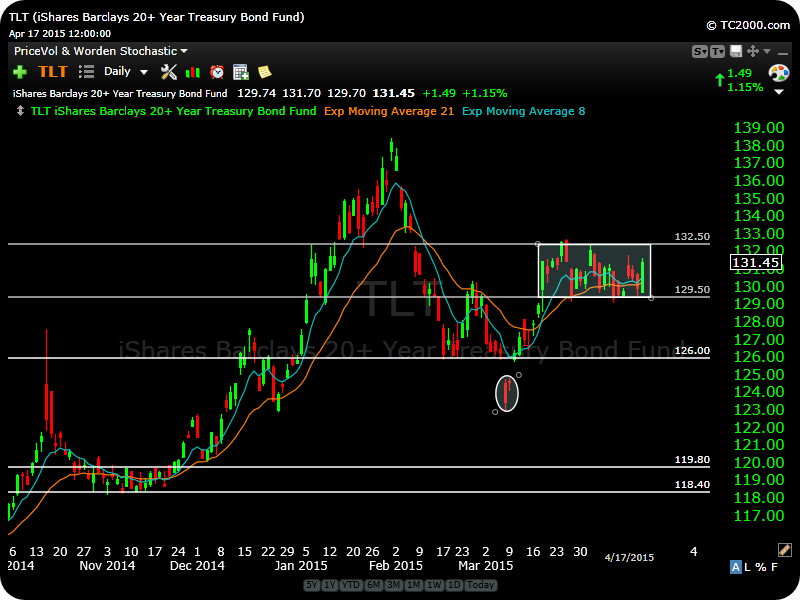 $TLT a solid 1%+ move on Friday pushing us back towards the top of this range of 129.50 to 132.50. We’ve been chopping around here for over a month and we’re still waiting for this market to tip its hand for the next directional move. Not much else to add, levels are clear.

$AAPL wasn’t immune to the selling this week as we saw signs of cracking lower from this holding pattern it’s been in for over a month. Earnings are out next week, so it’s not worth looking too closely at this chart as they are sure to disrupt whatever technical forces are at work here. For post earning reactions, 120 – 130 is likely the bigger more interesting levels to have on watch. 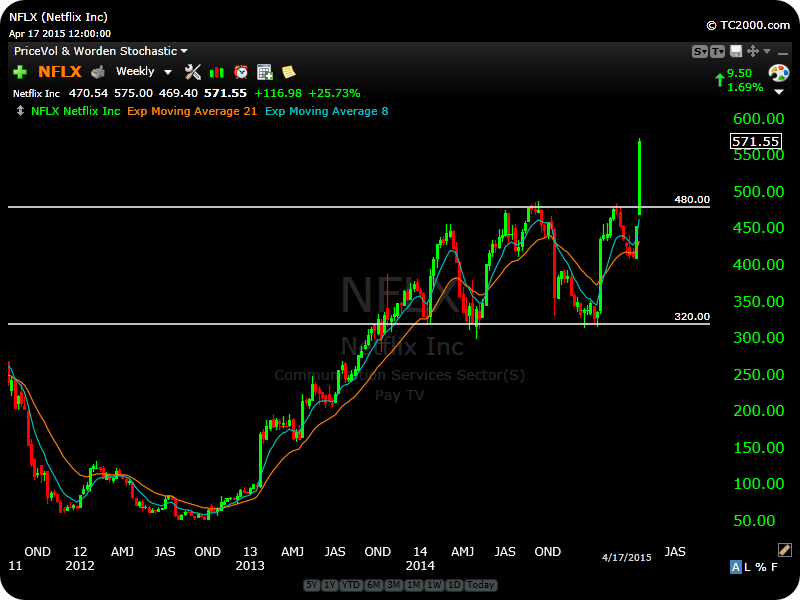 $NFLX after a very favorable earnings reaction Netflix found itself soaring to new all time highs and breaking out from prior resistance at 480. This is a weekly chart to show how much of a monster this name has been ever since bottoming in the low 60s back in 2012. Perhaps overbought near term, but this is nothing I would be interested in trying to jump in front of and fade. Whose to say Netflix isn’t in motion to tag 600 or even higher over the next 12 months? Congrats to those bulls involved.