Admittedly, while the markets continue to remain extremely resilient, especially in light of the recent global headlines, I do have a slightly increased level of bullish unease at these new highs. Leadership, breadth, some of the market internals that I pay attention to have some warning signs flashing. Does that mean i’m running out and turning into an uber bear? absolutely not. My opinion means nothing if the market clearly exhibits strong up-trending tendency’s. What it does mean is that I have lowered my long positions considerably, and I am more interested in just seeing how the market acts at these new highs for a few days before I add any new positions.  I think price is fairly vulnerable up here, and if we lose 187.50 support we could sink back into the previous range pretty quickly, perhaps this upper level range is a bull trap?

$SPY that was taken straight from my market overview from last sundays review, can this resilient market continue its grind? The fact that the market did breakdown from short term support this past week is not anything I am trying to boast about because it could have just as easily done the opposite. They key is to never stubbornly fight the market based entirely on your own opinion. Always allow the market to objectively confirm your ideas. On friday there was no real reason to have bearish bets beyond complete speculation or as a hedge. This Friday, things are a bit different. While Wednesday’s gap down was impressively met with some eager buyers they would ultimately turn into underwater bulls just one day later if they were not quick enough to exit or use some tight stops. Thursday the market opened with a small follow through gap to the upside and the bears capitalized on it and sold all day long slicing through 186.8 support and ultimately wednesdays lows. You can see we just about settled in on some intermediate support in the low 184s on Fridays session. This 184 level becomes pretty important because there’s really not a whole of strong support underneath us if that gives way. Of course we are still in a long term uptrend on the larger time frame charts but for the short to intermediate term we definitely could see some pressure here if bears continue to press and ultimately challenge those longer term rising trend line support. On the flip side it’s also possible this 184 level can ultimately hold as support and offer the next launch pad to higher prices. Time will tell, but for next week we really need to keep an eye on Fridays lows and this near term resistance the market was respecting on Friday ~185.80. Because I was eagerly waiting to put on my bear suit last Sunday I was fortunate enough to react quick enough to catch much of this downside action on Thursday/Friday and I continue to hold a speculative SPY april 187 put position in my swing account over the weekend with 0 longs. Short term bearish trends within the context of long/intermediate term uptrends are always tricky to capitalize on and typically require a bit more precision and flexibility as apposed to trades that have all timeframes aligned in the same direction. Keep patient and build up a watchlist of stocks to own or add too if you rather just wait for the return of the bull. Charts below have all been expanded to 60 minute timeframes to better show some of the more intermediate term support levels.

$AAPL well good news and bad news for my position here in Apple this week. Unfortunately they were able to squeeze me out of the short I put on last week for a couple of points loss early on but I was able to return later  in the week and catch a nice 7 point short in Apple down to 528 on Thursday in my swing account, meanwhile my day trading alert caught a 5.5 point short. Apple has moved back into the range between 515 and 535 and we can see that a measured move downside target could get us to 505 if the bears can maintain pressure and take out the previous pivot low at 516ish. Otherwise if you are a bull I think the situation is even more clear. Reclaim 535 and take out the highs near 540 for more upside momentum. Until that happens, there’s not a whole lot to be bullish about in this chart. 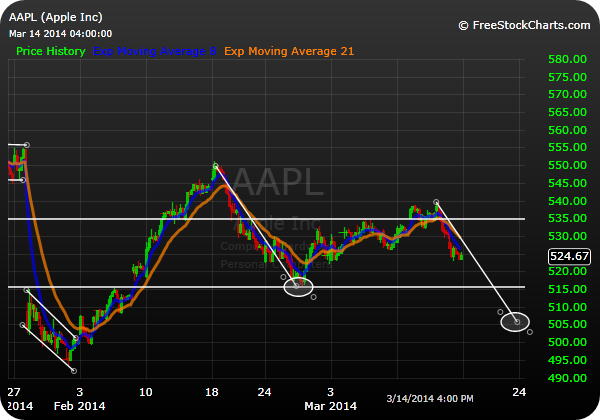 $GOOG rounded out a double top around 1225 and continued to fade lower with the market for the rest of the week. Short term we are approaching some support just under 1170 but really the larger and more intermediate support isn’t really until about 1135. I like Google alot and this is certainly a stock I would be interested in getting back involved in when the markets begin to prove itself again on the long side. I feel that we still have plenty of time to stay patient until that happens so for now Google will just be a watch list candidate. 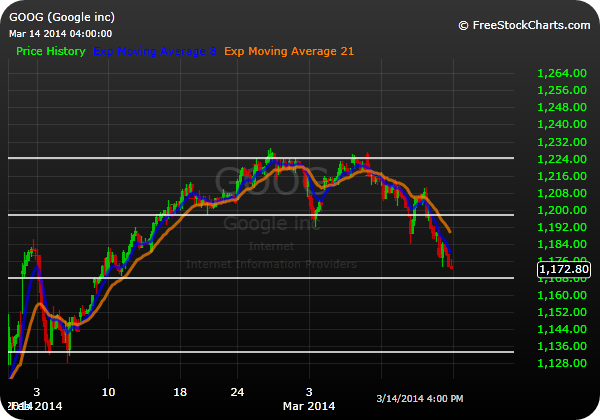 $NFLX rounded double top above 455, trend line break and at 440ish and really there’s not a whole lot to prevent price from retesting the breakout levels down near $410. Certainly a name that appears to have some air underneath it if the market continues to stay soft next week so it could offer some nice short selling opportunities next week. For the bull case I think you need to see 440 reclaimed before considering any type of long setup in Netflix. 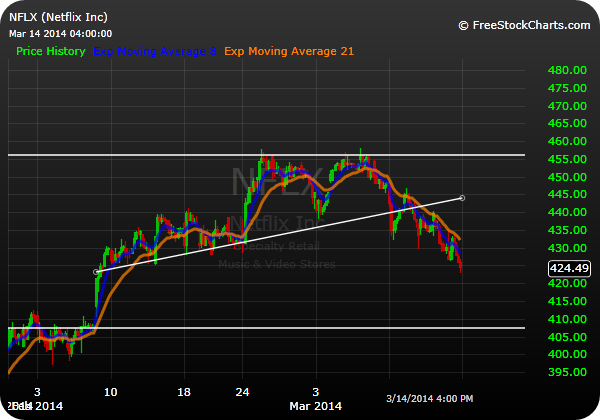 $FB top of my watch-list for long setups in my swing account once the market shows signs of firming. I really want to be involved in Facebook for the longer term uptrend but I don’t want to prematurely get involved just yet. $67 is an obvious support level and if it can break down from there then low $60s could come pretty quickly. I am keeping my eye out on this one over the next week or two but right here, right now, I am not interested in it very much. 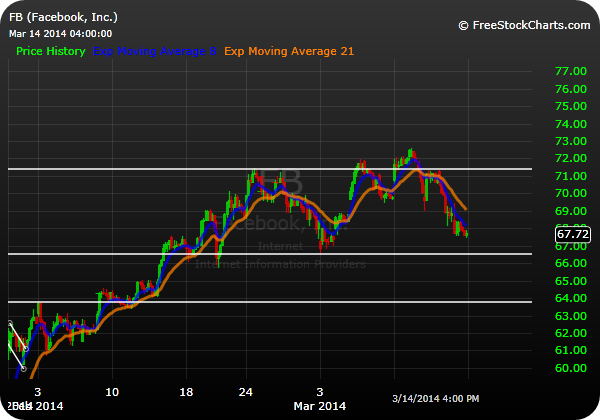 $AMZN hanging pretty damn tough overall given the market environment we had this week. 365 level that acted as resistance for 5 tests has now become support and Amazon seems to be hanging out nicely in a 10 point range or so. It seems like they want to fill the earnings gap from earlier in the year given how well it held up this week. I’ll be using this as a bullish trading vehicle next week if the market can show signs of life. 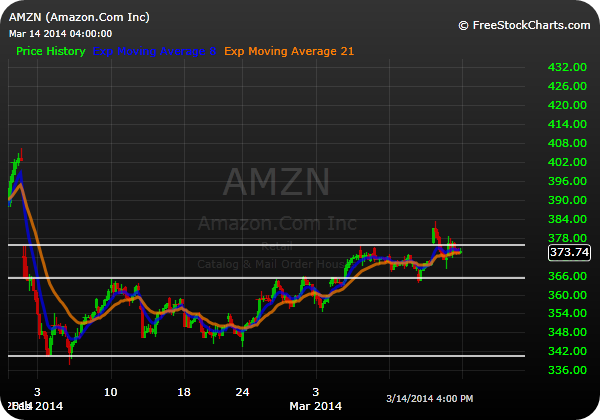 $TSLA closed Friday right above the earnings gap from a few weeks ago. This is another name, similar to Facebook that I want to be on board with in my swing account for the longer term uptrend. Again, i don’t love the market environment right now but I am interested in these specific names. I’ll be watching to see how it holds up next week and if it really slides through and fills the gap it is possible to see this name sink even further to the lower 200s as there isn’t a whole lot of price memory at these levels. Short term its messy, longer term the story is very much in tact. 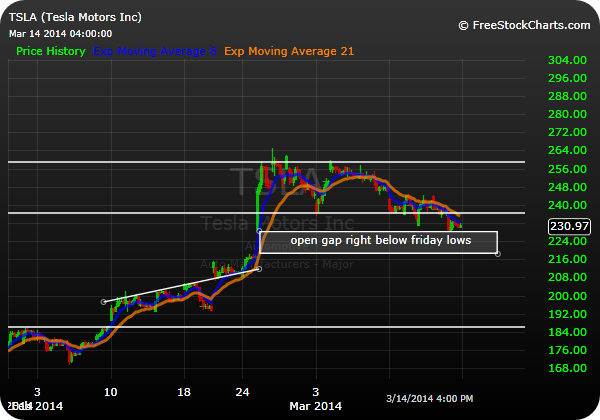