boom! market breakdown. here’s what you need to know.

$SPY so lets set the scene in the indices after this weeks breakdown. We spent the past 30 days trading at/near all time highs ping ponging between ~182-185 until Friday when we gapped below support resulting in an absence of new interested bulls and an increasing number of scared and soon to be panicked  longs. Here are some of the scenarios going forward:

If this is a true breakdown and intermediate trend reversal then the selling is not over, there’s more overhead supply to be offered out in the coming week and 175-176 can easily be the first rest stop.

If this is a 1-2 day shake brilliant, it certainly capitulated many weak longs and turned enough technicians bearish, perhaps to get short or throw in their bull towel for at least the next week or two. This was a fairly obvious support level breakdown and lets not forget this past year of trading is notoriously noted for its 1 day wonder false breakdowns, think November 7, 2013, January 13, 2014.

If this is a start to new market character of high magnitude thrusts followed by slow grinding basing action, perhaps we stabilize around these levels early next week, move sideways for 7 – 10 days before pushing back towards all time highs once the bulk of earnings season subsides.

Whichever camp you are in, I think Friday’s action is a day to stop and take notice, and assess how the changing market environment affects your trading strategy. Here’s how I managed my swing portfolio this week. Because I am a day trader at my core, a swing position for me is much more actively managed than most might suggest. Nonetheless, I really didn’t like the weakness we saw in many names on Thursday and the fact that we struggled for much of the day trying to stabilize on weak market internals swayed me to become an interested seller in some of my longs. I went into Thursday with 6 longs, and I left with 2. I sold my Amazon into 405 on Thursday for a 10 point gain, I sold my GS at 171.4 for a 70 cent loss. Fridays mess unfolded and what did I do? I bought back some of my positions I sold the day before. Amazon I jumped back in at 390, GS back in at 167.80, and so on. Can the market continue against me in the near term? absolutely. None of these positions are full size, as an experienced trader I understand the risks of buying pullbacks (a la knife catching). So this rant is to just describe how I personally navigate the markets, and how I manage risk during changing market environments without a stubborn predictive bias. Onto next week I go, with continued light long exposure with an open mind to any of the three above scenarios to play out. Price action is my guide. 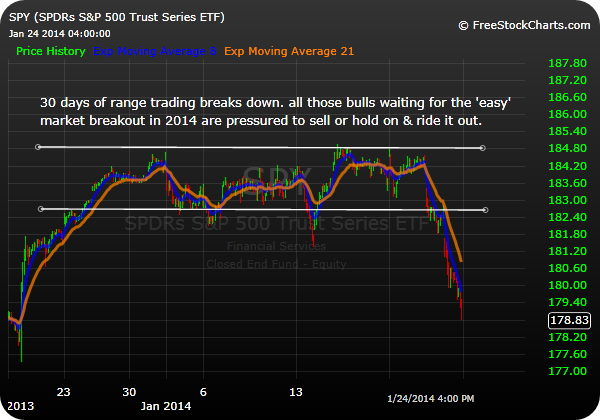 $AAPL held in there well this week, all things considered. Much of that due to Mr. Icahn himself single handedly propping up $AAPL on Thursday with all of his well telegraphed buying (don’t get me started). Apple has been in a larger trading range ever since the end of December from about 570 to 530 and we’re currently stuck in the middle of that range with a more immediate risk range from about 545 to 557. Earnings are coming up after the bell on Monday, and that’s sure to carry enough fuel to launch us out of this range one way or the other. So place your bets, or step aside, all eyes on tomorrows report. 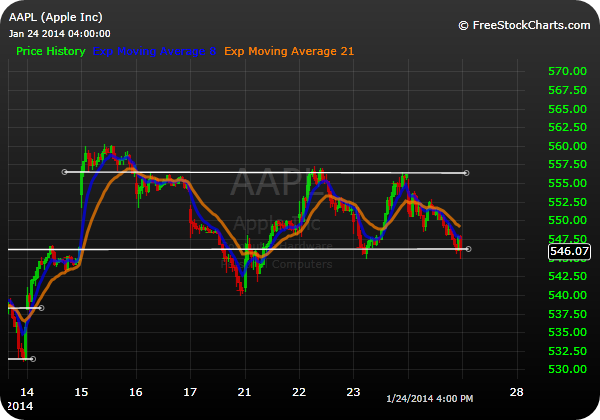 $GOOG after setting new all time highs just shy of 1168 Google fell to the markets pressure and rounded out a topping pattern and eventually broke through the immediate 1148 support. It’s currently in waterfall mode and the next level of interest comes in just below 1120 where price previously reversed to the upside back in the beginning of the month. If your short you can surely stay the course and take some profits along the way, if your long, manage that risk, and if your looking to get long watch for signs of stabilization next week. Oh and earnings are Thursday so be aware. 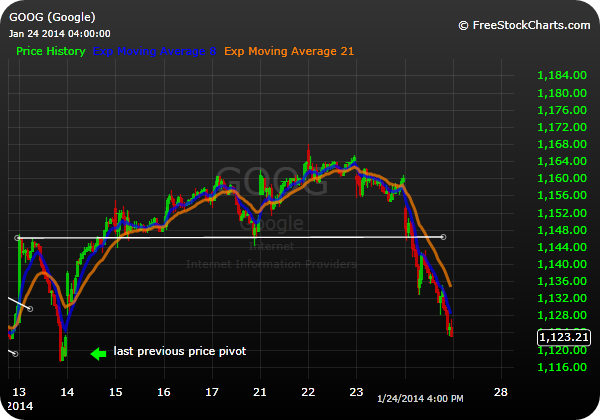 $NFLX well look what we have here,  prices that we last saw back in October on Netflix’s past earnings report. I don’t often trade earnings reports because the direction is essentially a coin flip no matter how you cut it, and it just comes down to finding an attractive risk to reward options strategy and monitoring historical and current IV to warrant the bet, none of which I am terribly interested in. However here is how I looked at it, very simply. Netflix past 5? 6? earnings reports have all been on fire, growth, revenue, subscriptions, everything has been going their way and the stock prices has reflected it. Last quarter they reported numbers the street was happy with and it gapped up to the mid 380s only to come crashing down some 70 points over the next two days. Why? None other than Mr. Carl Icahn selling 50% of his stake in the company locking in an amazing profit(trade) and  not because of a bad report. Going into this quarters earnings report we have no reason to suspect the story has changed in Netflix, the only thing that has changed is the stock trading 50 points lower than last quarters perceived fair market value price post ER. So I picked up a modest 345/365 call spread for about $6.50 leaving me roughly 3 to 1 risk reward on my money. Luckily for me it worked out, as I say I don’t ordinarily place bets into earnings but sometimes it pays to think outside of the technicals. As for the stock going forward, give it time to digest, watch for a break above 390 or below 380 for the start to a short term move.

$FB similar to the $SPY Facebook has been basing around all time highs for a few weeks now and it too saw a breakdown from its high level base. The levels are pretty clear here, 54 has acted as intermediate term support so we will want to see price stabilize around this level next week otherwise we’re in danger of an even larger breakdown. Earnings are out on the 29th, so be aware if you have any open positions.

$AMZN closing at the bottom end of this  15 point trading range, Amazon looked like it wanted to break out earlier in the week as it made new all time highs above 407. The momentum couldn’t hold in there and it came crashing down piercing below the bottom end of it’s range on Thursday and into Friday. Amazon is one of the longs I have on at 390 with a half sized position. It certainly looks sloppy and in danger of disregarding this level of support all together. The long entry was certainly aggressive as there were no real signs that 390 was to be an inflection point, so the action early next week will let me quickly decide how long I want to stay in this position. Earnings are out on the 28th. 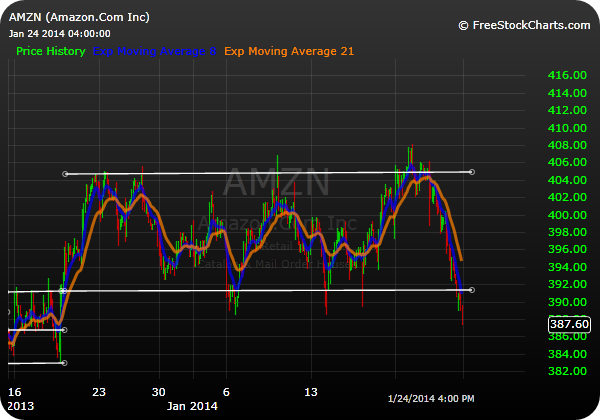 $TSLA held in there pretty damn well this week given the market environment. This mattress of support 172-174 seems to be well bid so far in Tesla. This was one of my top longs from last week and it sure demonstrated its case this week holding up well. Keep an eye on this stock next week, if the market and start to catch its footing I suspect Tesla is one of the first to make a run to the upside. 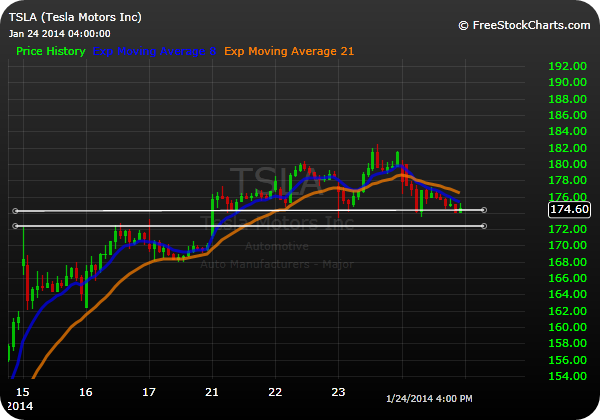