$SPY what a fantastic week for the bulls as they stepped up right when they needed to and not only held last weeks lows but also went on to recover the entire recent shake out and then print new all time closing highs for the S&P500 on Friday. Objectively looking at at this 30 minute chart we can see price has resumed its short term uptrend and is bumping up against last weeks highs at 190.42. The action this week suggests the market wants higher prices and although it couldn’t quite definitively take out the highs the bulls did regain control of the near term trending direction. What makes the bull case more compelling this time around is the increased number of recent pulverized high growth stocks that are pushing higher out of well developed short to intermediate term bases. That extra ‘sturdy’ participation from a large group of stocks could account for the fuel to break away from this choppy mess in the $SPY as many of these names put in some intermediate retracements towards their March highs. The bearish case here would argue we have not yet cleanly broken out from this range and the possibility for upside rejection still looms overhead. Bears would also be quick to point out this entire weeks advancement was done so on very low volume. Either way, the price action momentum is up so lets keep a close look at Friday’s highs going into Tuesday to see if more progress is made.

$AAPL last week in my recap I wrote about being on watch for an early break above $600 to start off the week and perhaps even the signal to a new leg higher out of this recent sideways action and we got exactly that. Apple looks great here, as it is now comfortably trading above 600 level with a solid base of support underneath it. One of my favorite longs right now and I would expect to see this name continue higher next week. 602 is now the line in the sand for the bulls to support going forward. 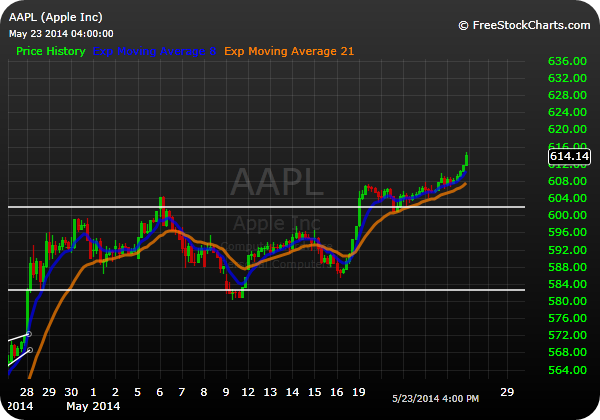 $GOOG just a programming note with Google, starting next week I will only be reviewing the preferred A stock (GOOGL). Google broke out nicely from this short term range and after clearing 535 there was no looking back. There is room for the stock to run now as I have the next intermediate level of interest way up there around 585, some 30 points away. Google finally giving the bulls some higher probability long setups this past week, so lets see if they can continue to make that happen into next week. 535 is the line in the sand for the bulls to hold on the downside. 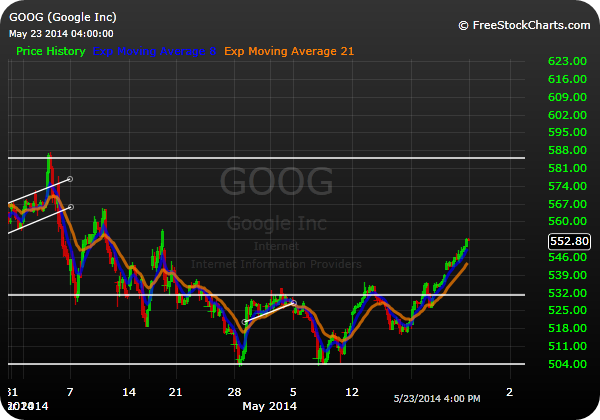 $NFLX what an absolutely monster this week after exploding higher on Monday and clearing that 350 level I talked about last time around there was no looking back. We can see this perfect rounded base taking shape now and the next real intermediate level of interest isn’t until about 430 in Netflix. Tough to chase this after a 5 day 50 point move but congrats if you were apart of it. Great snap back recovery by the bulls. 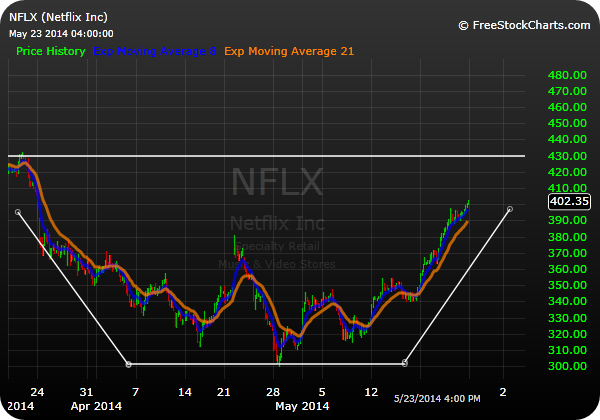 $FB sleeping beauty Facebook is still hanging out in its bubble as we look at this 60 minute chart. The 61.50 level could be used as a more refined breakout area that could spark a move up and out of this sideways range and ultimately above the highs of the past 2 months at 63 in change. It was my belief that Facebook would be one of the first to resolve it’s range and lead the high growth pack in the next direction. Looks like it ended up being the exact opposite. I am very interested in some possible rotation creeping into Facebook next week so keep it on your radar. On the downside, if the bulls lose 60 then it would suggest it needs more time or possibly Facebook might be the sour one of the group.

$AMZN similar to Facebook, Amazon is still in the wait and see camp with respect to putting in an intermediate retracement higher. Amazon closed Friday bumping up against its 312 resistance so early next week if it can get some legs above this level it should have room to float higher as it pushes into a new range. Below 312 and it just needs more time. 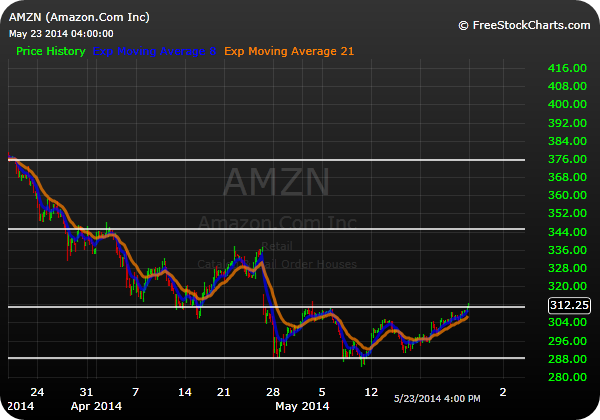 $TSLA very steady grind higher after getting smacked on their earnings report. Tesla’s range right now remains wide from 180 to 220 and price is in the process of floating to the upper bounds now. Unlike many of the other growth names it has not yet been able to really clear any prior resistance level but at the same time it is building out this base in a very health fashion. Keep this on watch as it sets up. 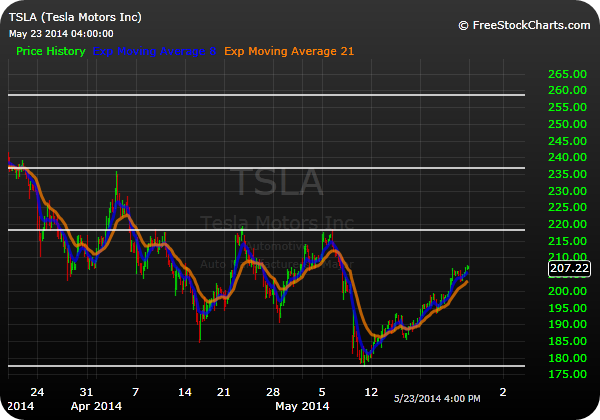