the bull & bear cases at all time highs

$SPY ding ding ding new all time highs. If you’ve been following my weekly posts this shouldn’t have come as too much of a surprise as we’ve been on top of this bullish bias grind type action (last week: february bulls banging against all time highs) in the broader markets. So let’s take an objective look at where we are now that we have broken above the December/January all time highs in the S&P.

THE BEAR CASE: we aren’t exactly effortlessly trending higher as of the past two weeks. The leadership overall has been a little more narrow and the overall  volume on this February rally has been much lighter than the January pullback we experienced to start off the year. The overlapping back and forth type grind action demonstrates the indecision and significance of these price levels as a possible inflection[turning] point. Fridays final 1 hour candle goes to show you how ‘on edge’ the market appears to be when the bears chomped off almost 2 SPY points before the bulls stepped up and bounced it higher.

THE BULL CASE: first and most importantly, we’re at all time highs. Any objective analysis should realize the importance of a market at an all time high. Second, while we may have just slogged through two weeks of grinding type action we have literally V-shape-snap-back-rallied the January pullback in 18 days with 0 consecutive back to back down days. There has been no pullback to speak of since we reversed higher at SPY 174 on February 5th and I am willing to bet the majority of bulls have missed this snap back OR are not as invested as they may otherwise want to be.

Taking both sides into account I find it hard to be an objective bear at this given time. That’s not to say i’m suggesting being stubbornly long because I DO think there is a very real chance the bears can come out of the woodwork and hit this market (as demonstrated on fridays close) especially on some well timed headlines (hmm Ukraine?). The point is the market is STILL acting well, it’s still grinding the wall of worry higher. I remain with 6 longs and a SPY put position on as a hedge. Until the market starts breaking support and acting crazy I will remain long.

$AAPL the bulls finally showed some signs of life as they took a stand at the gap opening we talked about last week down around 516. This could be early signs of carving out a range between 516 and 535 or so and when taking into account the longer term daily chart this could be very bullish for the bulls if they can slog it sideways for a week or two and hold roughly these levels for a higher low above 490. It’s real early to be calling for that but its something to keep in mind. For now, 516-535 is the range I am looking at, trade accordingly. 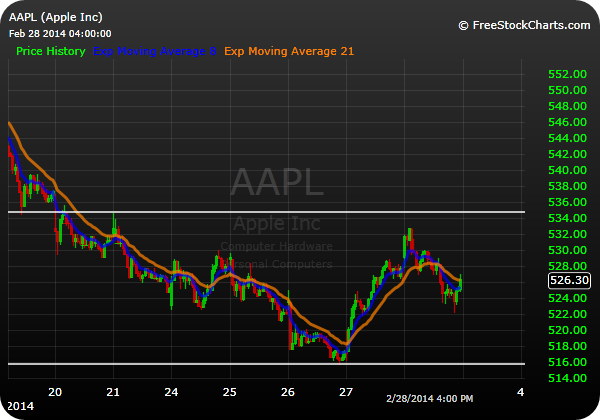 $GOOG  the super trend continues in Google despite some sloppy Friday action. We’re in a strong uptrend that could be transitioning to a sideways consolidation between 1225 and 1200 if we see some further weakness next week. I would like to get back involved in this name on a swing basis and maybe this pause in the price action will present the opportunity to do so. I’ll be watching how this acts over the next week or two for any setups. 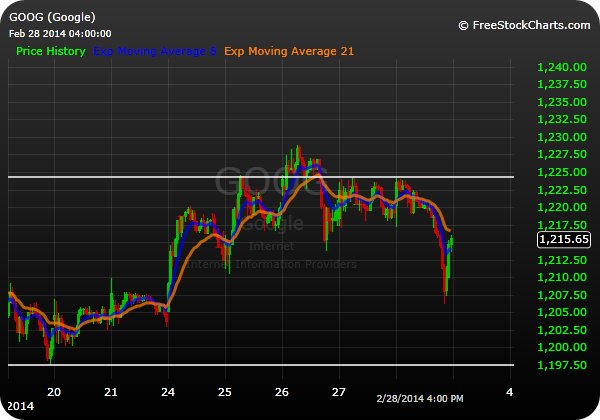 $NFLX expanded out the timeframe here in Netflix to show this megaphone pattern I am still watching. There’s lots of different ways one could interpret the price action here but ultimately my bias is Bullish given its higher low and higher high behavior at / near all time highs. Admittedly Netflix has been off my radar recently as this pattern doesn’t excite me all that much but the volatility does lend itself to some expanded day trading ranges. 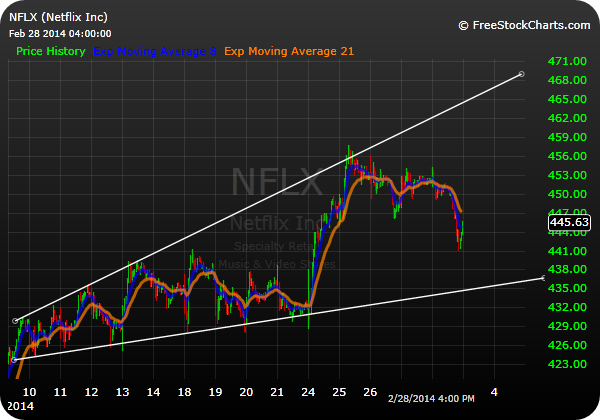 $FB a monster leader this year experiencing a small pullback after printing new all time highs above 71. I am eyeing this name very close as this is a name I would like to be involved in with my swing account. $65-$66 should offer a band of support if it can trade down there otherwise I’ll be watching for an upside breakout from this falling channel. 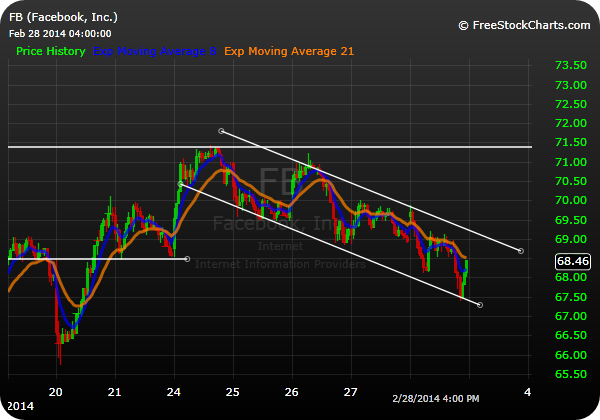 $AMZN 5 straight days of bullish action with a close right below intermediate resistance at 365.  Amazon could be worth a look on the upside next week if it can clear Fridays highs and start trending higher to fill the earnings gap back from 1/31. It’s forming an immediate term high level base with support at 356 trying to crack this 365 resistance. Watching close for momentum breakout day trades next week.

$TSLA acceleration to the upside over the past week off of some secondary offering news that doesn’t really play into my trading analysis whatsoever. What matters is Tesla is pushing new all time highs which all started with a monster gap and go higher back on Tuesday 2/25 that roasted any aggressive shorts in the name. I like this name alot and I don’t understand the obsession I see with people shorting the name. This type of action is some of the clearest signals the market can send to suggest that it wants HIGHER. One of my top day trading candidate to the long side next week. 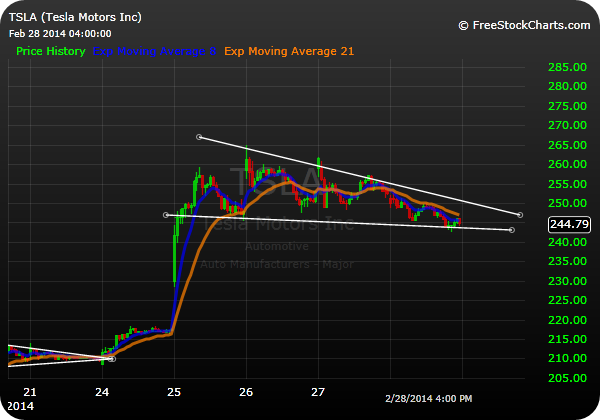