$SPY well I titled last weeks post as “the easy bounce is over” but we saw some clear continuation on this shortened holiday week. We came into the week probing the downside a bit but a two day dip is about all we could get before the bulls stepped up preventing any type of rollover. I know many bears will speak to the light volume but guess what, price could have just as easily traded lower on light volume but it didn’t. 162.30 give or take is the breakout level to watch and the longer we can hang around there or stay above it the more bullish we should be in the short term. The market is showing a lot of resiliency after pushing off the lows we put in two weeks ago around 155 and the fact that we continue to chug higher/base instead of putting in any real retest speaks to the bull case. Doesn’t mean we can’t see a hard sell week coming up, but given the action we saw the past two weeks it’s tough to jump back into the bear suit until the market shows you a reason to. 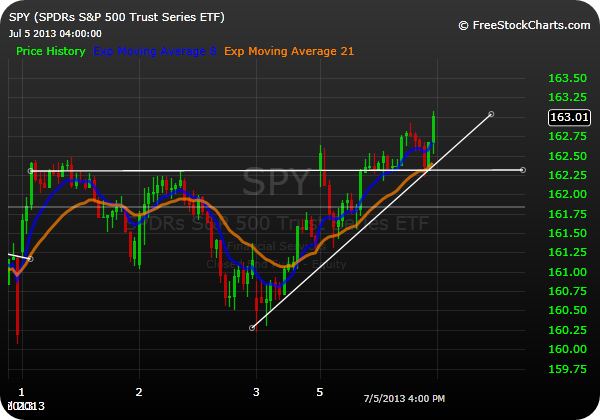 $AAPL had a nice upside breakout from the descending channel it was trading in last week which I mentioned we should be on the lookout for. It made short work of the minor level and gap fill around 412 and continued higher before finding more supply around 420 which shouldn’t be that surprising given the previous pivot points around that level. It remains in a very healthy channel at resistance and so long as it can hold onto this 414 level the short term momentum should continue to the upside. Below 414 and we will have to take the foot off the gas and re evaluate levels and action. I could make a good case that this is a name that could see a continued run into earnings and then an equally good case this is just another bear squeeze before more downside. Only way to know is to follow these short term levels and re-evaluate at each stop. For me within my timeframe this is bullish until proven otherwise . 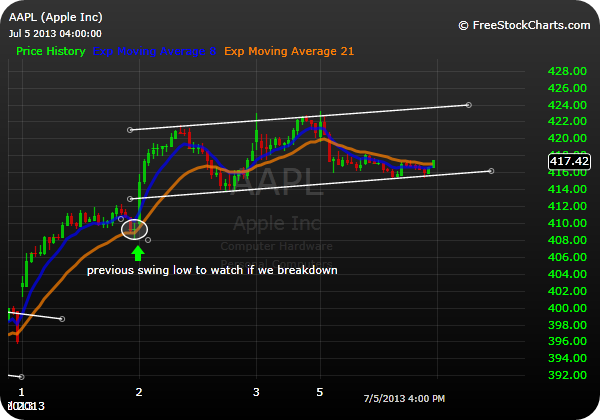 $GOOG saw some clean trending action this week as the stock traded off Monday and Tuesday before buyers stepped in and aggressively bought the dip under 880. It ended the week, much like the market above the recent highs and overall looks healthy. 890 looks like a clear level to keep an eye on and I would become more neutral if we broke and held below that level for a period of time and would want to see a higher low get put in before looking long. And on the upside the longer we stay above 890 the faster we should see a 9 handle back on this market leader.

$NFLX Beautiful upside breakout from the triangle I talked about last week and then a real clean bullish flag right down into the previous 220 action area before breaking back up to the highs around 225. This name looks great, Above 225, call it 226 we could see another leg higher ignite to 235 or so and on the downside we will want to keep an eye on 219. I continue to like this name and have for several months now. 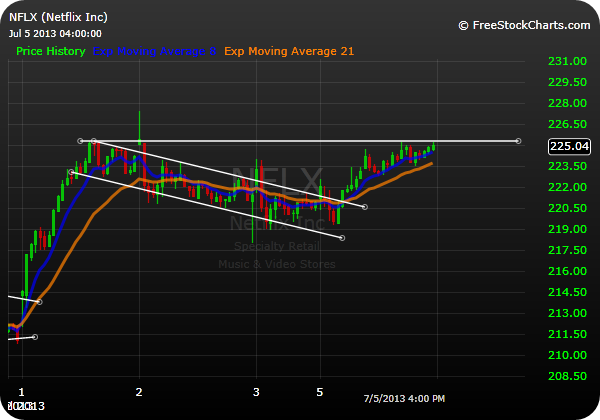 $FB is a name I was on the lookout for a breakout above $25 to ignite a leg higher but as you can see it spent all of 1 minute trading above 25 monday morning and continued lower for the rest of the week. This name is telling us it needs more time within this base before resolving in either direction. The longer term charts are sloppy within this 24-25 range and it doesn’t appeal to me at all to get tossed around at these levels. Give it more time, there are too many better setups to be involved in than to fight through this. 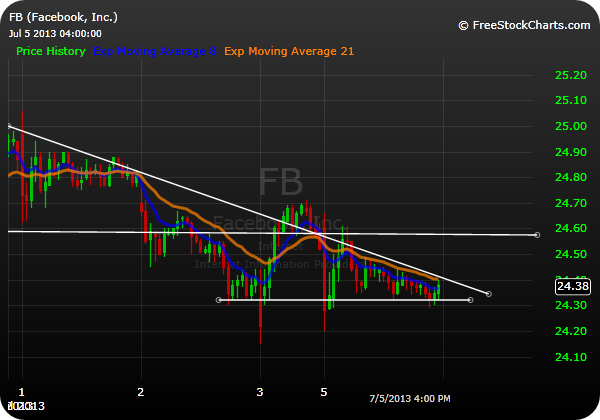 $AMZN last week I wrote it seems like only a matter of time before Amazon tagged all time highs and we got exactly that this week. All time closing highs on this leader has me very interested in trades to the long side as there is no more upside levels to worry about. It based in this horizontal channel throughout the week and the next trigger long will be above 286.3 or if price moves back down to the lower 280s. Amazon just moved to the top of my watchlist.