bulls back against the wall 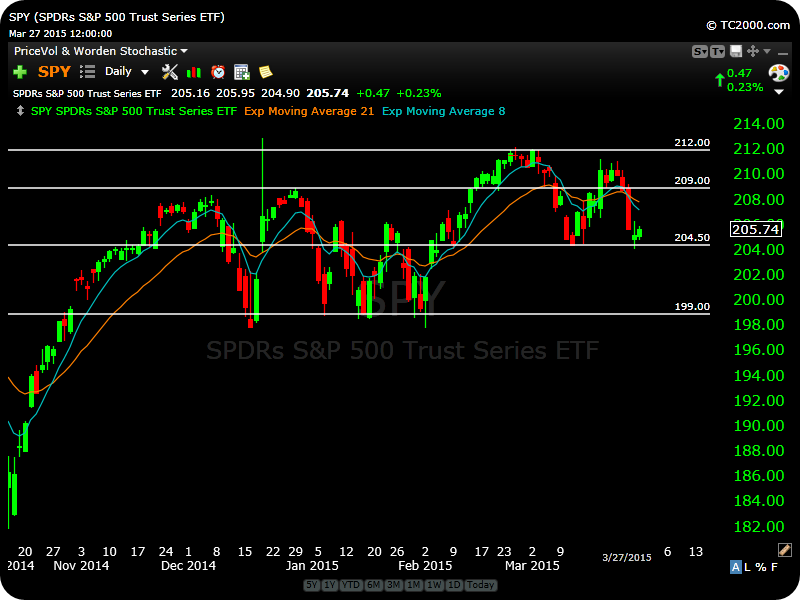 $SPY what a difference a week can make! The bulls gave up all of the progress they made last week and then some. We fell short of re-testing the prior highs at 212 (we came real close but the recent ex-dividend makes it look’s more bearish than it really is) and proceeded to roll back over into 204.50 support. This is an important area for the bulls to hold onto because a breakdown below 204 would set us in motion for a potential re-test of 199. And at 199, the stakes are real high, given how many times it was tested last December through February. Now on the other side of the fence, the bulls need to firm up against these lows real quick and make an attempt to retrace higher back up into 209. I have no idea which way this is all going to unfold, but given the action this week, it’s the bulls who have their back against the wall and now need to step up. I am very lightly positioned here with not much commitment one way the other and I’m trying to maintain an open mind. It should be a fun week, let’s see what we get. 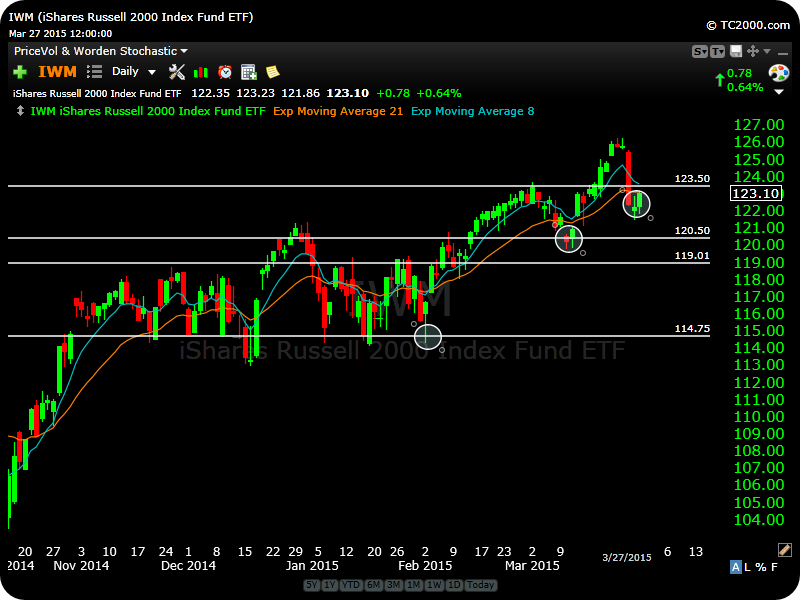 $IWM the small cap index has been the leader this year, but even it wasn’t able to avoid the selling pressure. Despite suffering a slightly larger loss on the week (2.29%) than the $SPY, it’s still holding up much better from a technical perspective than the S&P500. It’s still in an uptrend on the daily time frame, as you can see by the circles I have drawn on the recent pivot lows, bulls need to hold last weeks lows to keep that pattern in tact. Also note we are still above the major breakout level of 120 from earlier in the year. So heading into next week let’s see if this recent action was just to keep bulls honest up here, or if this is just the start to a more substantial pullback. On watch. 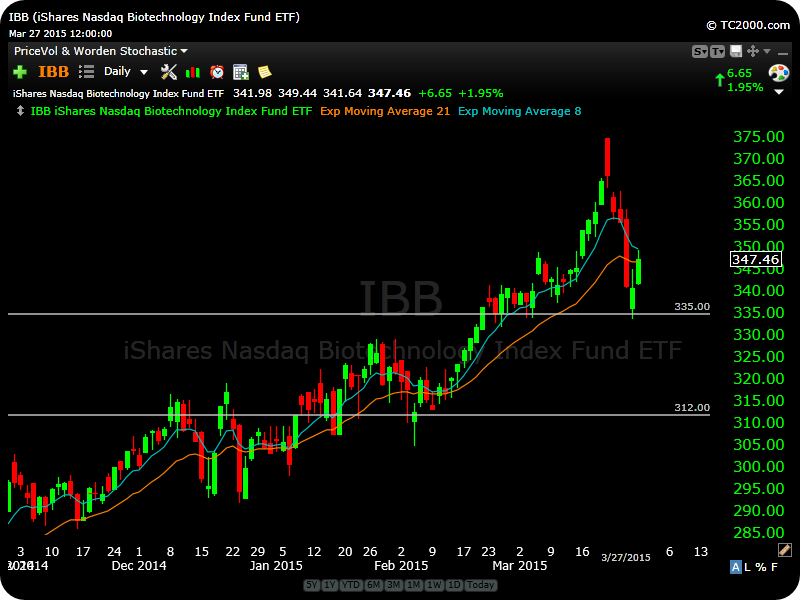 $IBB the bears went straight for the heart of the bull this week, and that of course was by raiding the biotechs. Last week we saw this index surge to the upside extending away from all of the fast moving averages even after it had already been in a steep uptrend. This week we had a sharp pullback with losses exceeding 8% before we put in a two day bounce to close out the week. And even after a near 10% correction, there remains little damage done by last weeks move. The steep uptrend is still in tact, and buyers stepped in right where they needed too (prior support 335). Bottom line, flip a coin, as there’s a little something for everyone on this chart. Ranges have been expanding as volatility is elevated so careful trading this beast until it’s had more time to cool down. 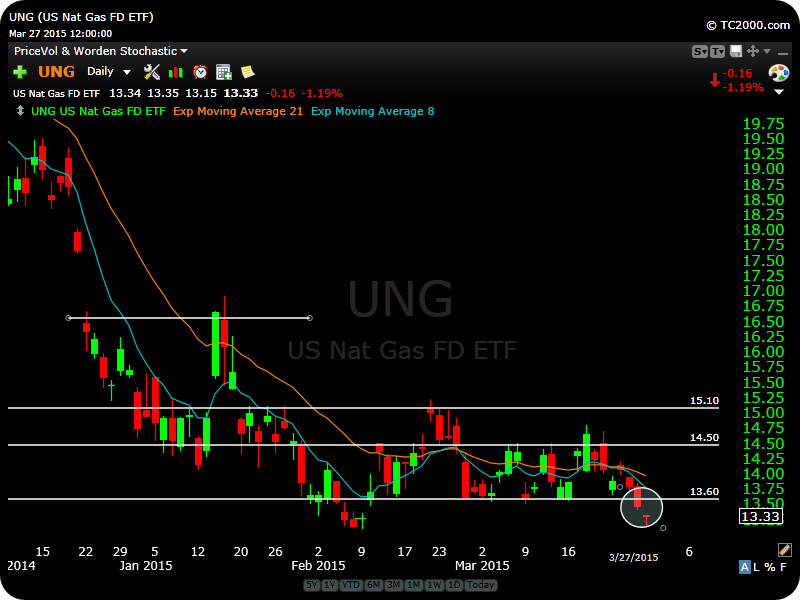 $UNG under pressure this week and almost tagged the lows from February on Friday’s session. I discussed this potential breakdown short setup in my weekly trade ideas video using 13.60 as the trigger. I am currently in this trade short, and even though I didn’t like the reversal off the lows in Friday’s session, I’m sticking with the trade until I see the breakdown level at 13.60 reclaimed. The action here has been tight (for UNG’s sake) over the past couple months and I like the potential to wash out a new leg lower. I’ll want to see the lows from February broken early next week otherwise this could turn into a false breakdown, double bottom sort of look. Let’s see what we get, my risk is defined. 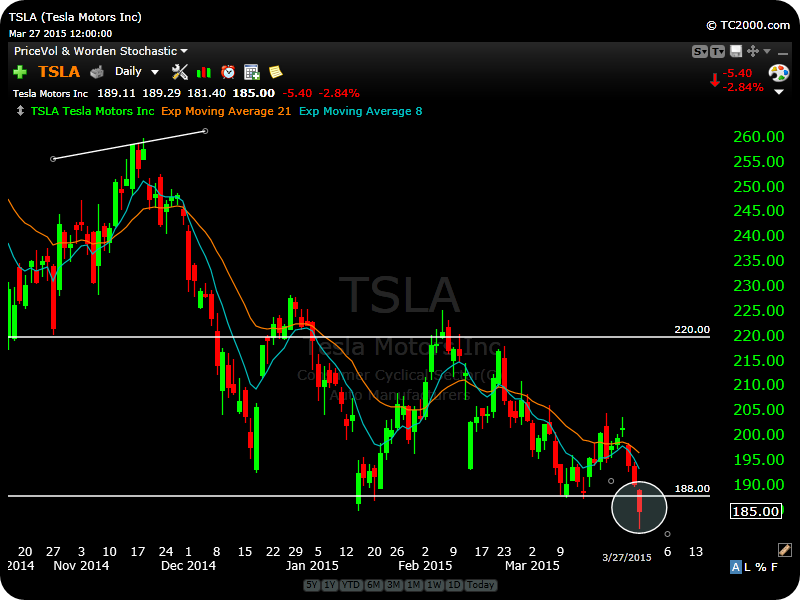 $TSLA we’ve been eyeing this 188 to 220 range for a few weeks now and on Friday we finally saw a breakdown below the bottom end of this range. If you were to look on a weekly chart you can also see the significance this area had back in May of 2014. While this chart is a bit sloppy, the action on Friday firmly tips the scale in favor of the bears to really pick up some steam on the downside. The 188 – 190 level is a clear line in the sand to measure the success of this breakdown heading into next week. Looks good for lower so far. 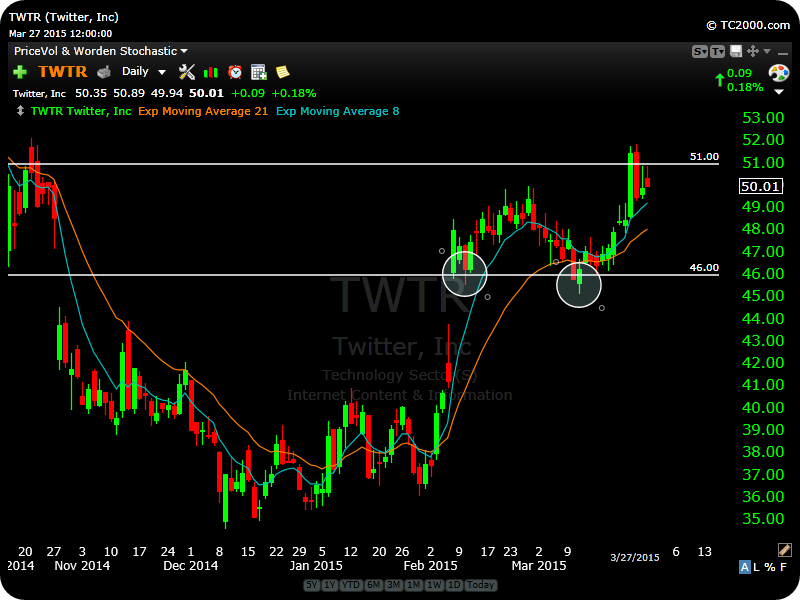 $TWTR broke out above the cluster of highs holding as resistance around 49.50 from February and made it’s advance on the 50 level thanks to Tuesday’s impressive 6% rally by the bulls. Ultimately the highs above $51 were faded, but given the action this week in the indices, the bulls did some heavy lifting. There is a band of supply to contend with from 51 to 54 that coincide with highs made back around October of 2014, but through $54 and this one could really ignite to the upside. First things first, let’s see if the bulls can maintain this $50 level next week and set this one up for higher prices. On watch.