It feels good to be back home. I spent this entire past week road tripping through upstate New York, Niagara Falls, Toronto, Montreal, Vermont, and then back home to Massachusetts. Six days in all, had a great time, lots of good food and sights along the way and a great way to reset the trading mind by being away from the charts. Now time to catch up on what I missed.

$SPY overall the action to the upside has been steady ever since clearing the 190.50 resistance back on 5/27 and since that day the bulls have been firmly in control of an uptrending market (my previous recap, uptrend continues, breakout imminent). There’s lots of reasons to have doubt in this recent breakout but ultimately the only thing I care about is objectively analyzing price structure which in this case is making higher highs and higher lows. It’s clear the market has extended itself over the past few days and while we are a bit overbought we also know that overbought tends to become more overbought just as likely as it is to retrace. I remain very bullish on the overall market even though I am aware short term it could use some time digesting these recent gains and I would be happy to see a longer more developed range develop near these highs to set up another long opportunity. 194.30 or so is the next short term level of support for the bulls to defend if we do start pulling back next week and prices above Friday’s highs at 195.43 could offer additional long setups for a quick trade. 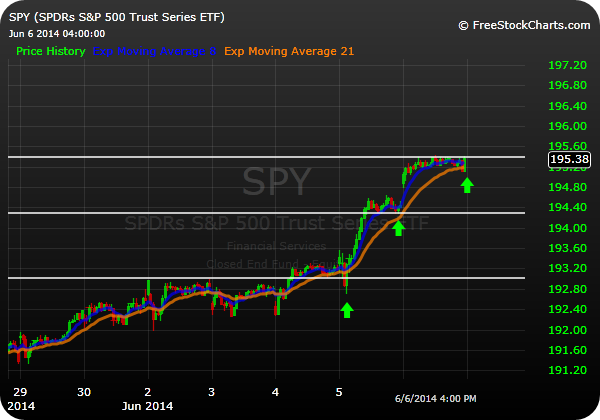 $AAPL continuing its tear higher as it leaves all the bullish skeptics in the dust while printing a 650 handle on Friday before getting rejected and closing some 6 points lower. Apple will open Monday with it’s newly adjusted 7 to 1 share split price which might be catalyst enough to ramp up volatility despite the split being completely meaningless to Apple’s underlying value. Support has been coming in around $644 and below there price is vulnerable to fall back into the previous range all the way down to 625. This chart while somewhat extended short to intermediate term looks to be a great candidate for future long setups. Definitely a name on my day trading radar tomorrow, and wouldn’t it be ironic if the stock split marked the intermediate top in the stock for the following weeks/months to come? (PS don’t trade off that thought, cause I surely will not be) 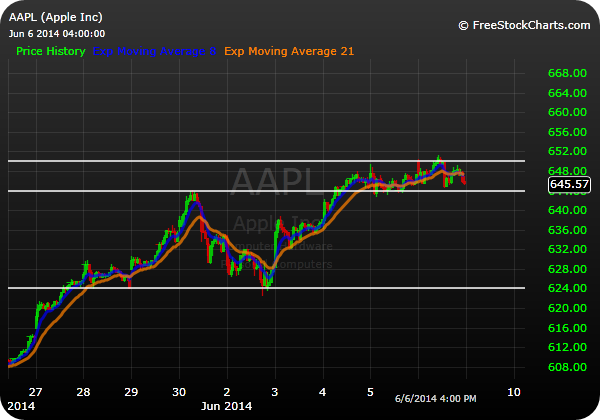 $GOOGL trying to put in a solid higher low at the 550 level ever since breaking out above multi week resistance of 540 back on the 21st of May. Short term Google appears range bound between it’s closing price on Friday at 566 and roughly 553. If we can clear this level early next week and break into the 570s then a trade to the long side sets up nicely for a retest of the May highs. Alternatively if we fail at this level and reject into this lower range than we are going to need a bit more time filling out this base before resolving the next short term direction.

$NFLX there has been no looking back in Netflix over the past few weeks as it continues to act well and trend higher day after day. In my latest recap of this stock I mentioned 430 would be the level of interest for this uptrend to possibly find some supply based on the price action from earlier in the year. By no means would I blindly short or sell my long stock at this level, however it is a point at which I would pay closer attention to the price action and look for signs of slowing. Until the price action suggests otherwise this is BULLISH action. 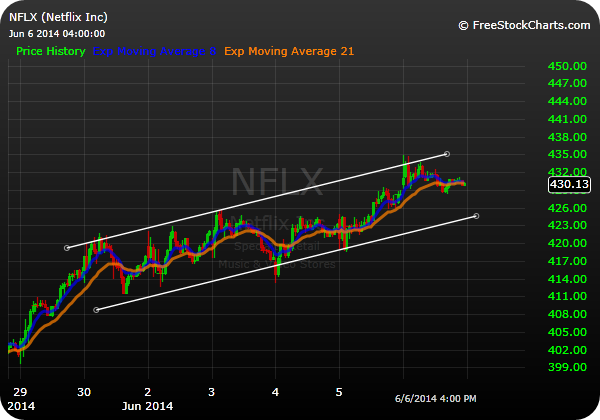 $FB range bound in this short term range from 62 to 64 which is at the very top of a larger daily time frame range with resistance coinciding with this $64 level. I like the sideways action that is getting put in just below a major resistance point and I would be a buyer of Facebook above $64 for a swing trade. Facebook has yet to really give us an upside retracement towards its March highs although one could argue Facebook did not suffer as large of a drawdown as many of the other growth names over the past few months. Still a wait and see for me right now. 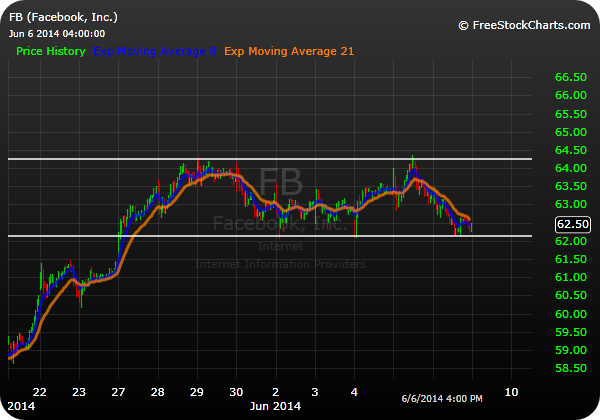 $AMZN finally getting that break above the key 312 level I talked about in my previous post which led to a furious two day squeeze higher some 20 points in short order. It looks like 345 or so is the next intermediate level of interest to find some overhead supply but for the here and now Amazon looks great. Near term resistance is Friday’s high at 330 and the previous pivot low for Amazon is down around 322. I like this name and breakout going forward so I’ll be watching close next week. 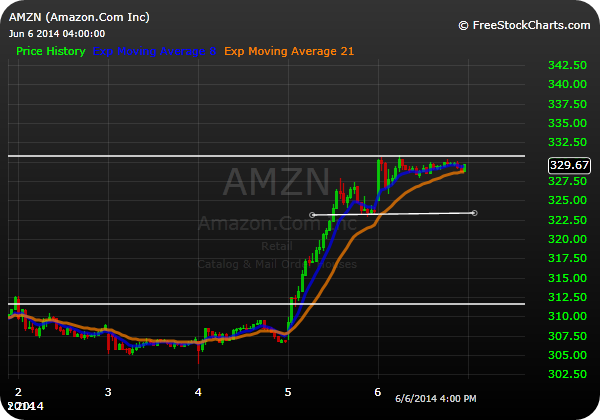 $TSLA four hour chart in Tesla this week just to show the structural bigger picture range the stock continues to find itself trading within. 215 – 217 is the zone Tesla needs to break through in order to get any sort of momentum to the upside. Until the stock can wake up and show me something I’m just not that interested in trading it. Short term 200 – 215 is the risk range to watch. 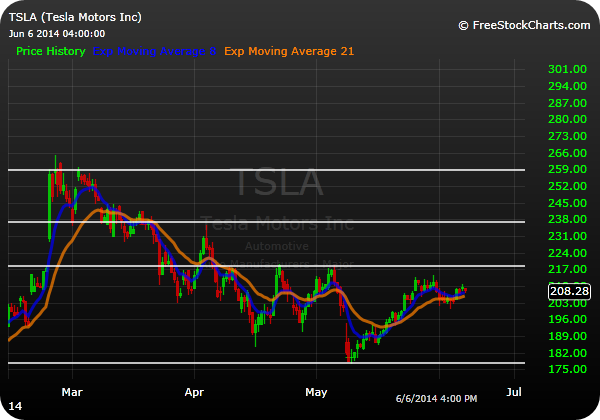