bulls fail to take a stand & look at this divergence! 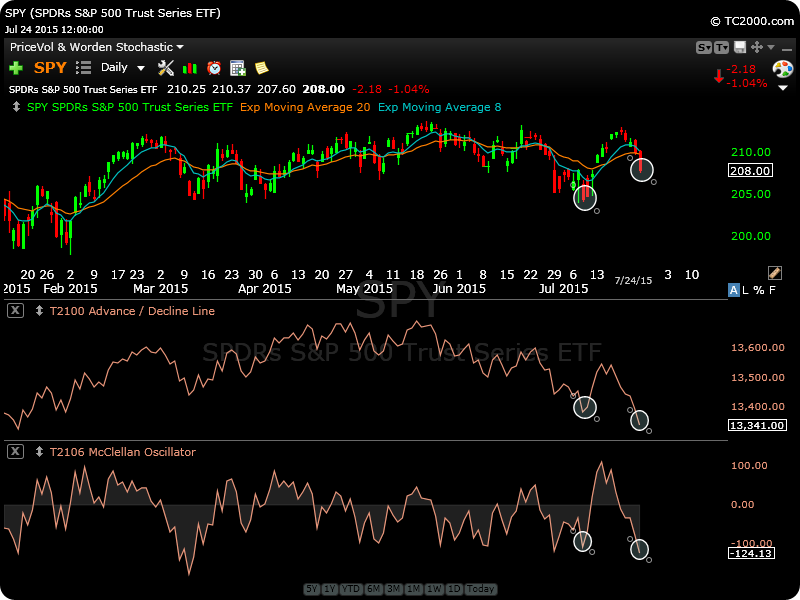 $SPY last week the markets closed on a very bullish tone as we bounced ferociously off of support and in some cases all the way through significant resistance areas. The table was set for the bulls this week to consolidate quietly and continue their march higher. Instead, we got the exact opposite. A bleed lower every day this week losing ground and ultimately retracing roughly 50% of last weeks move by the close on Friday. What’s even more troublesome about this weeks move is the extreme negative divergence present in some of our indicators that measure the internals of the market.

Take a look at the AD line and mcclellan oscillator in the above chart. Notice the positioning of where we closed on Friday in those indicators relative to their lows from early July. Now compare that to price. You can see in both indicators we’ve already taken out those prior lows which is indicating that selling pressure is broad based and accelerating on the downside. That’s a negative and something we need to pay close attention too. The positive however is that given roughly 5 days now (monday wasn’t really a day down but still bearish action in nature) we are getting a bit stretched to the downside in the near term and could expect a day or two bounce. Just keep in mind, with what the internals are showing, that could potentially be seen as an opportunity to position for further downside.

Bottom line, we’re back in this same long term song and dance range from 204 – 212.50. Someone just wake me up when we really break out from it.

I’m going to continue my analysis later today or tomorrow morning covering more markets either in this post or in video format, so check back tomorrow for more!