the bulls might have coal in their stockings after all!

$SPY gap higher to start the week off on Monday but the bulls failed to penetrate through previous all time highs around 181.75. That failed move near all time highs was enough to get the ball rolling down hill as longs started bailing on positions and shorts aggressively piled in. It wasn’t until Wendesday when price broke below a minor pivot of support setting up a break into the large open gap from 12/6. In my recap from last week I wrote about a break lower being the less probable event this week, however I did talk about the gap being an important level to hold for the bulls otherwise lows from 178.50 would quickly come into play. Now that the damage has been done it certainly puts a different tone heading into the end of the year. I exited all of my swings early in the week (partials on Monday and stopped on remaining) and I did not feel comfortable buying anything back later in the week. In general, buying 4 points off a $SPY high has gotten rewarded this year but this time around I am being a bit more cautious. I hate the wash out effect we saw from Wednesday on, and I tend to think there might be a few too many people of the opinion they can just buy and hold into EOY thanks to seasonality and a melt up thesis. I think its a tricky spot for swing positions so I’ll stick to day trading and hope for a better spot to enter some swings, either a continued wash out lower or more constructive basing action around/above these levels. If the bulls cannot hold these lows we’re in danger of another flush lower with next intermediate support not until 174-175. On the upside, if we can come out of the gates breaking above 178.50 we could start constructively working back to all time highs. 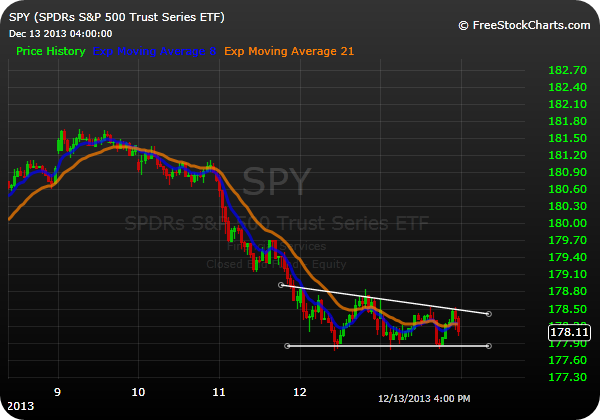 $AAPL broke below a closely watched support level on Friday (560) that it has been trading above for the past two weeks. The technical pattern in Apple short term is certainly bearish as there is alot of overhead supply above this 560 level that will have long holders experiencing some pain here if Apple cannot gain its footing. We need to keep in mind that this bearish short term action is within the context of an intermediate term bullish uptrend so we can expect dip buyers would get interested in this name as prices continue to fall. As for me I will continue to day trade this name and favor the short side until it can reclaim the previous support of 560 or put in a good sized flush lower. 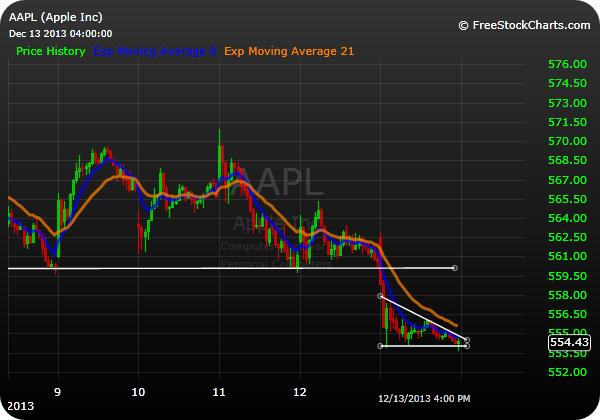 $GOOG saw some early bullish follow through that almost got us to that big round 1100 number before stalling out at the markets mercy on Wednesday breaking down from its newly formed high level base around 1085. That was enough to shake me out of my long position especially given how the market and other stocks were acting. I locked in my gains and still have not gotten too interested in buying it back just yet. There is some pretty heavy support about 1050 that seems like it wants to be tested and possibly undercut if the market shows more signs of cracking next week. 1050 is more or less in line where I would become a “dip buyer” if we are to see continued straight line selling. Not much else to say in Google, just look at the perfectly downly sloped moving averages in alignment to tell the story. Sitting patiently. 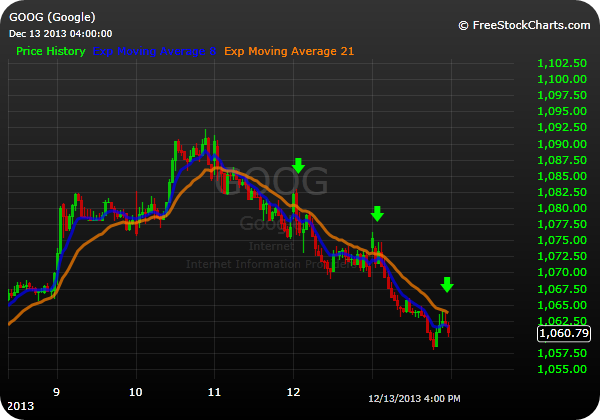 $NFLX I decided to extend the channel lines I had been drawing in Netflix dating all the way back to the end of October to demonstrate despite all of the zig and zagging this name has been doing it still calmly trades within the context of this rising channel making new all time closing highs. 350 remains intermediate term important support for the bulls to hold in tact and so long as it can trade above there we can continue to grind out higher prices as we have been doing for the better part of 2 months now. We can also see the lower trendline from this channel comes in about 360 which should offer some dynamic support if we see further market weakness next week. I like the name, took a couple of trades in it this past week and will continue to look for long opportunities. 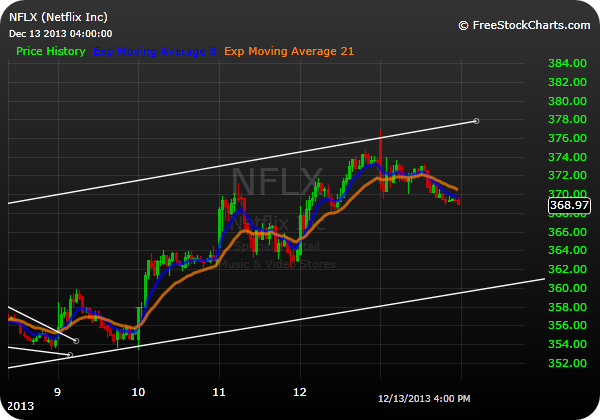 $FB here’s the monster that defied the market this week after news released on Wednesday night Facebook would be added to the S&P500 which immediately gapped it up above recent $50 highs and never looked back. Sadly this was a name that I was long coming into the week but I was shaken out on Wednesday for a small gain shortly before that wonderful news broke after hours creating the gap up. Funny how that works 🙂 Anywho this is the best looking chart that I follow and it certainly seems set in motion to tag those all time highs around $55. I will be watching for long opportunities this week both for day trades and swing entries. 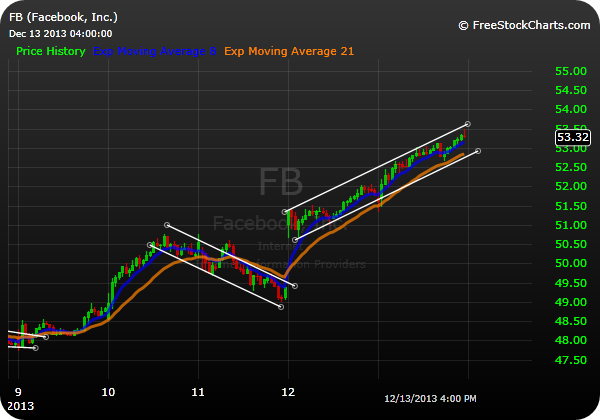 $AMZN certainly outperforming on a relative basis this week as the bears could not break Amazon down from this two week range from 380 to 390. We’re certainly winding up the spring here and whichever way the breakout occurs could set the tone for the stock for the next few weeks. Will it make it out of this mini market down draft relatively unscathed and break higher to retest all time highs near $400 or will it fail to retest the highs and breakdown to previous 360 support? I’ll be watching for some sort of resolution next week but until then I am not interested in getting chopped up or guessing a direction. 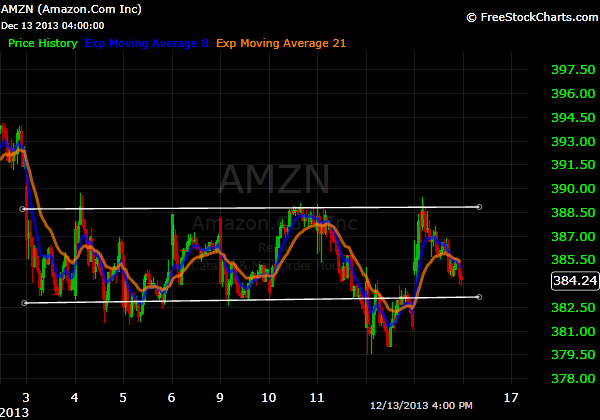 $TSLA very clean horizontal base Tesla broke out from this week and continued it’s march higher to fill the open bear gap from 11/6 around 151 before pulling back later in the day on Friday. 145 becomes a pretty obvious level for the bulls to step up and hold and it even sets up a reasonable breakout pull back setup around the closing prices of Friday if you believe in this name going forward. I am just watching at this point , certainly cannot argue with the recent bullish price action and I will be watching Tesla early next weeks for signs of support above 145. 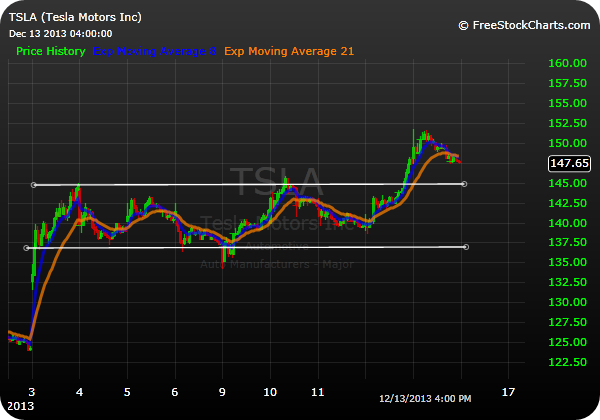