bulls pushing the upside into earnings 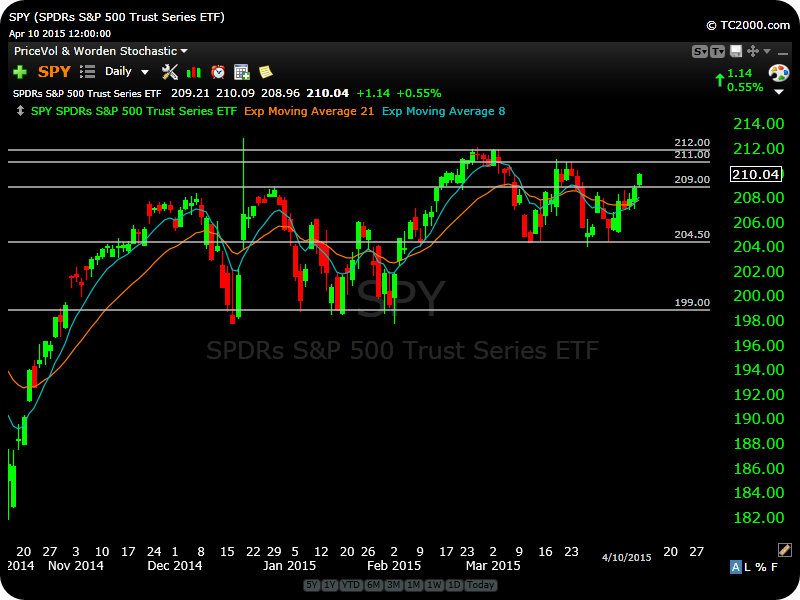 $SPY Monday’s action said it all. If you followed my market videos throughout the week you know I had a bullish tone as soon as we kicked off the week with that engulfing candle following otherwise poor economic data. If you’re not seeing my videos, check out and subscribe to my YouTube channel or get on the free Trade Risk weekly Newsletter. The bulls manged to finish the week as strongly as they started by breaking us above the 209 level I have been watching now for the past couple weeks. 209 is an important level because it served as the top in the market from late December 2014 and then acted as support when we broke out earlier this year in February. But just because bulls are over the first hurdle it doesn’t mean they’ve won the race yet. We are a bit stretched here in the short term so it wouldn’t surprise me to see us hesitant to make more forward progress especially as we head into this band of resistance at 211-212. As far as the downside, we now have more levels to work with. 209 is the high level breakout level we just mentioned, and then below that 207 is where we found support Tuesday through Thursday. Bottom line, I remain constructive on the market and I am positioned as such as members saw the long signals add up throughout the week taking advantage of the upside momentum. And remember earnings season picks up next week, so check those dates! 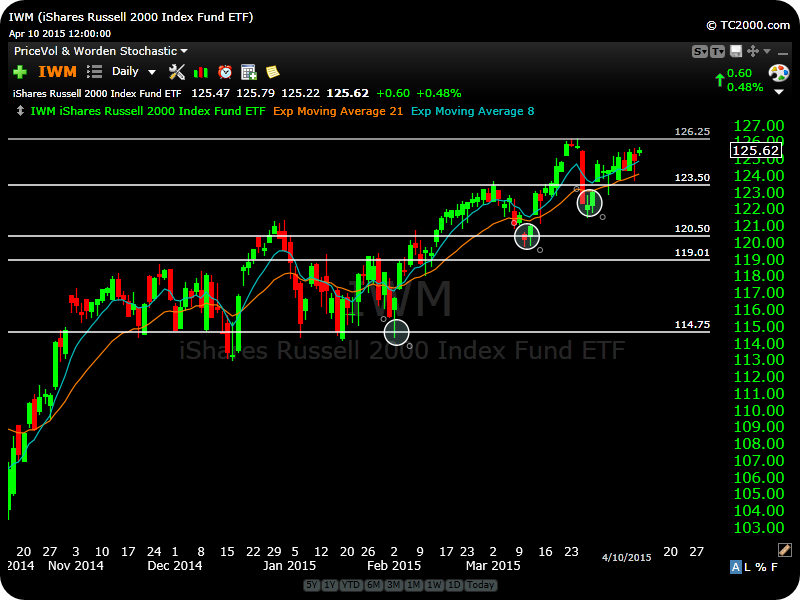 $IWM a slight change in character as we did not see the small caps lead the charge this week like they have so many times in the past. The Russell finished up on the week a near 1% but the $SPY came in at 1.75% and the $QQQ at 2.50%. The uptrend here is still firmly in tact but notice the series of small topping tails stacking up above this 125 level. Again, minor, but something to keep an eye on if we start to see this index begin to lag. We’ll want to see the small caps break to new highs soon if they are to continue their dominant lead. Not much else to add here, 124-126 is the range to watch. 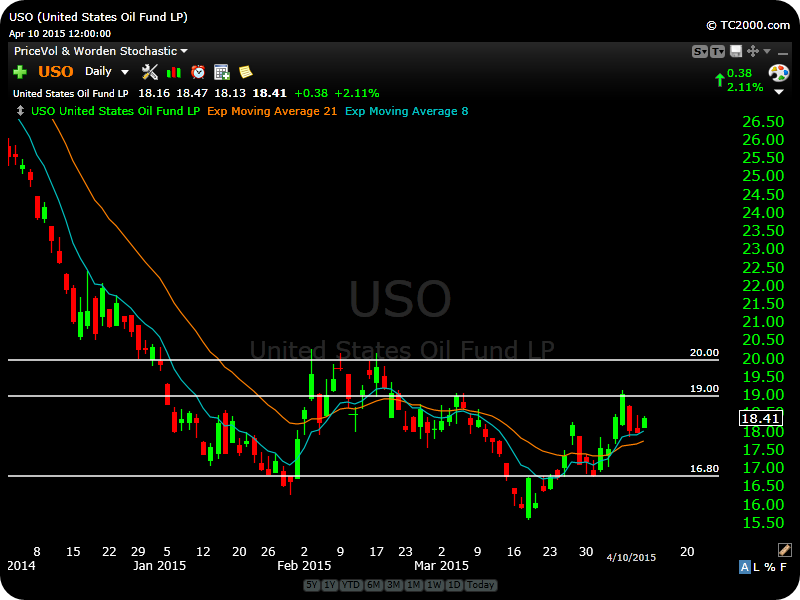 $USO a 5% rally in crude is certainly what helps the $SPY this week as overly beaten down names in the oil services space begin to put in a relief rally. Oil, while still a mess long term, is showing classic signs of stabilizing range bound behavior. The bigger range at work here is $16 to $20 and frankly this could be the levels we’re talking about for the next weeks and months to come before anything dramatic changes. $19 is what the bulls need to set their eyes on, while defending the lows around $18 and then $16.80. 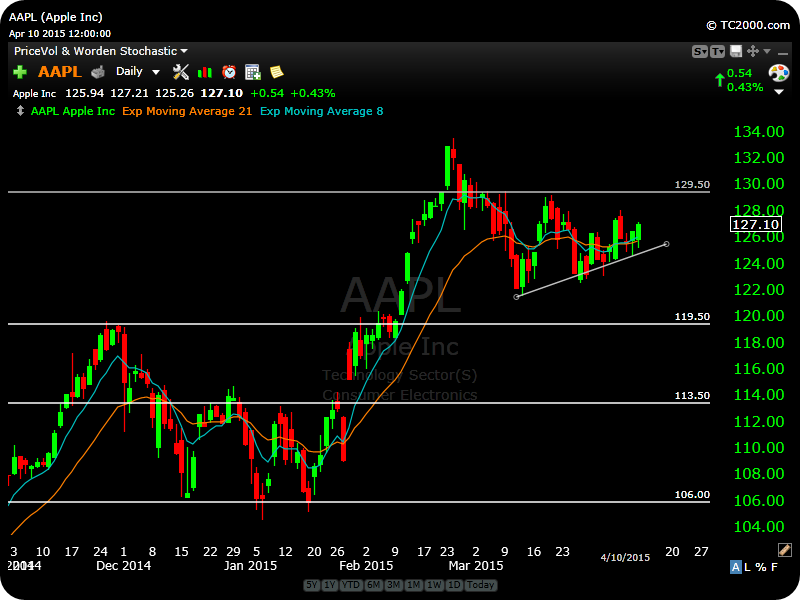 $AAPL still hanging out here quietly consolidating February gains. We have had this clean rising trend-line guiding price higher over the past couple weeks as it tries to work itself above this 128-129.50 area of resistance. Apple still has 2 more full weeks of trading before reporting earnings but perhaps that is what the market is waiting on as a catalyst before breaking one way or the other. Levels here are clear, keep an eye out for a breakout but be mindful of earnings soon. 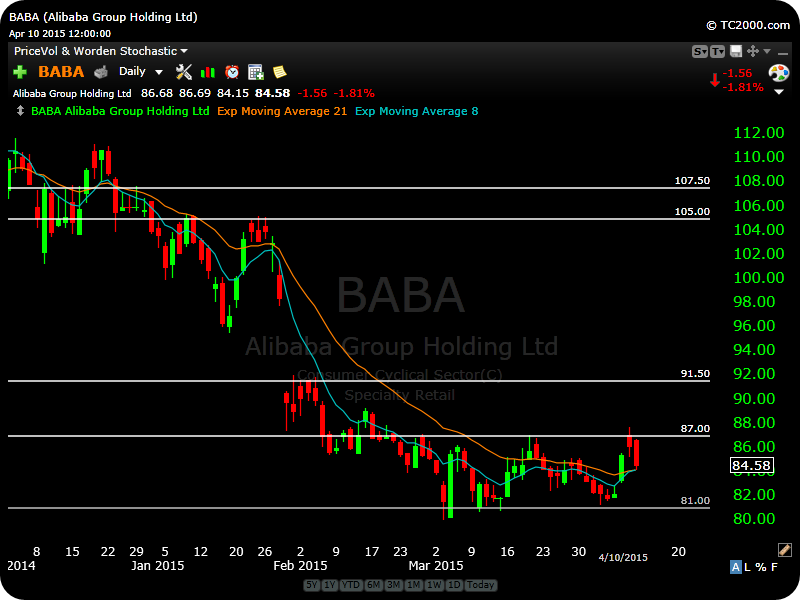 $BABA showing some signs of life for the first time in a while. The trend in Alibaba has been nothing but down since November of 2014 but this recent base between 81 and 87 is finally starting to shape up. We couldn’t quite close on the highs of the week but this is a name that is starting to interest me for a breakout in either direction. A rally back above 87 would likely get me long and a breakdown below 81 would signal short. I like tight patterns, and in a name like Alibaba this 6 point range for 1+ month of trading fits the bill for me. I have no idea which direction it will break but I’ll be watching.