bulls teetering on the edge

$SPY for a few weeks now I’ve had this 199.50 to 201 range drawn on my chart, patiently waiting until one of those levels gave way. This week, the market finally gave us a clue to the next directional move and that was mostly due to Friday’s session where we sold off all day and broke our line of support. So there we have it, the lowest close in 14 days, and threatening to continue further if the bulls can’t quickly reclaim this breakdown level. The close below support is mild at this point and you can see we did struggle to continue lower on Friday when we got under that 199 level. So if we objectively analyze the market here, we’re making lower lows and lower highs (on a 30 minute timeframe) and we just broke a support level, that is bearish regardless of how you cut it. But if the bears really want to put a little panic in this market then they have got to come into next week aggressively probing lower prices. You can see by this chart we’re already showing some early signs of perhaps catching a bid just under this 199 level. The last thing the bears want, is this slightly lower low to become a false breakdown and lead to a v-shaped squeeze higher like we’ve seen so often this year.  As for myself, I am pretty neutral here, and I really want the bears to convince me a bit further before I declare them victorious for the first time in a while. We have a busy week on deck with the fed meeting, $BABA ipo, $AAPL pre-sales numbers etc. etc. Stay sharp!

$AAPL a very noisy week for this one as Apple announced their new iphones and introduced the new Apple watch. 98 to 100 was the range I had been watching and after the dust settled from Tuesday’s session we can see that the market levitated to the upside and broke through resistance. It was enough to get me long for a swing trade and I’ll continue to hold on here so long as we hold above $100. The next level on deck is essentially the all time highs right around 103. Looks good, for higher, play the range 100-103.

$FB continues to take it’s time and grind higher day in and day out. Overall Facebook has been extremely resilient to any selling pressure and it’s just happily riding the fast 8 EMA higher on the daily chart in a, two steps forward, 1 step back fashion. This is some very bullish action and the fact that it is just grinding out all time highs makes it even better. Short term, we have a developed range to work with from about 77 to 78. Above 78 and the story continues, below $77 and perhaps we take a little pause to develop a larger range. Looks great overall, keep it on watch.

$AMZN it feels like I haven’t traded or written about Amazon in a long time and it looks like we may have a short term bullish pattern developing here. Amazon had a pretty potent sell day back on September 9th but since then it has attempted to stabilize around this 330 level. From the looks of it now, we have a mini inverted head and shoulders pattern with the neckline right about 332. This is something we’ll want to keep an eye on next week especially if the market can catch it’s footing. 328 to 332 is the short term range here within the context of a larger down trend. 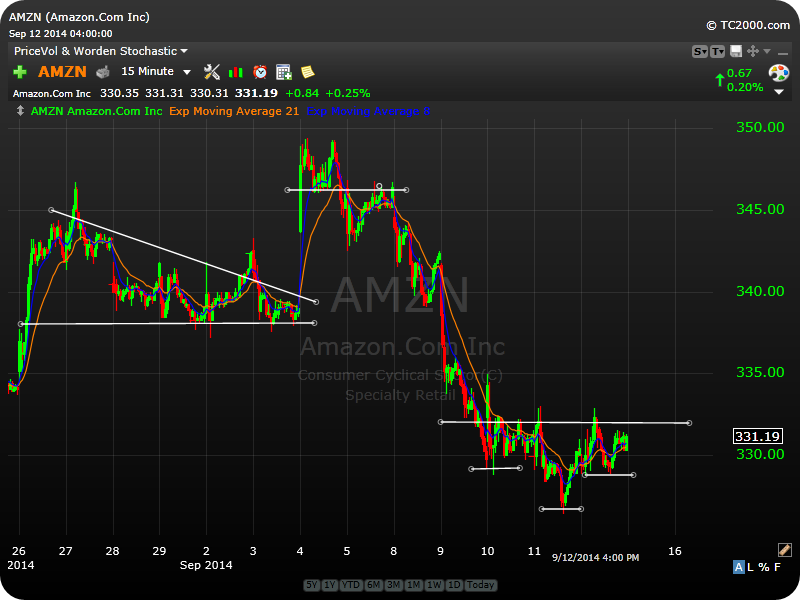 $TSLA here’s another name that has been keeping to itself very quietly acting well near all time highs. Tesla has been carving out this 10 point range from 275 – 285 for the past 9 trading days. This could turn into a very textbook continuation pattern if the past two weeks of trading is all going into fuel for the next push higher. Keep this on your radar for next week. If the market decides it’s not ready to breakdown, look for Tesla to lead us up and out of this range.