bulls turn to break this market out 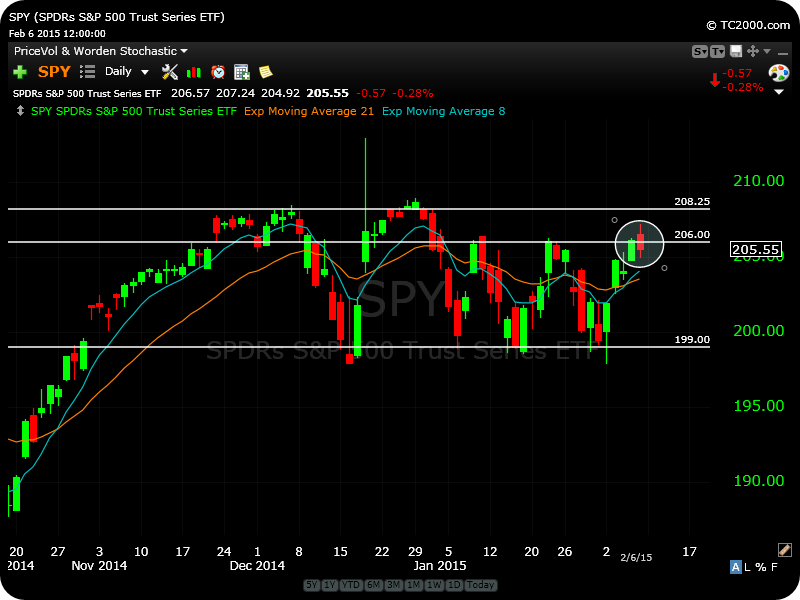 $SPY last week all eyes were on the bear advance, testing major support at 199 and this week we’ve done a complete 180 and now the ball is in the bulls court to resolve this range. Bears were violently rejected from a breakdown on Monday and we spent the entire week punishing them as the market traded all the way back to the top of this multi-month range at 206. The market initially advanced on the job data Friday until the afternoon where we saw a reversal take place at a critical level of prior resistance and ended up closing red on the day. Just as interested as I was last week to see if the bears could push their breakdown, I’m now looking to see if the bulls can seal the deal to the upside. I’ve been rotating through long setups all week, but with the reversal late in the session on Friday I find myself with the lightest long exposure of the week, with just 1 long and 1 short on into the weekend. Bottom line, the sideways chop continues, now let’s see if we get resolve next week. 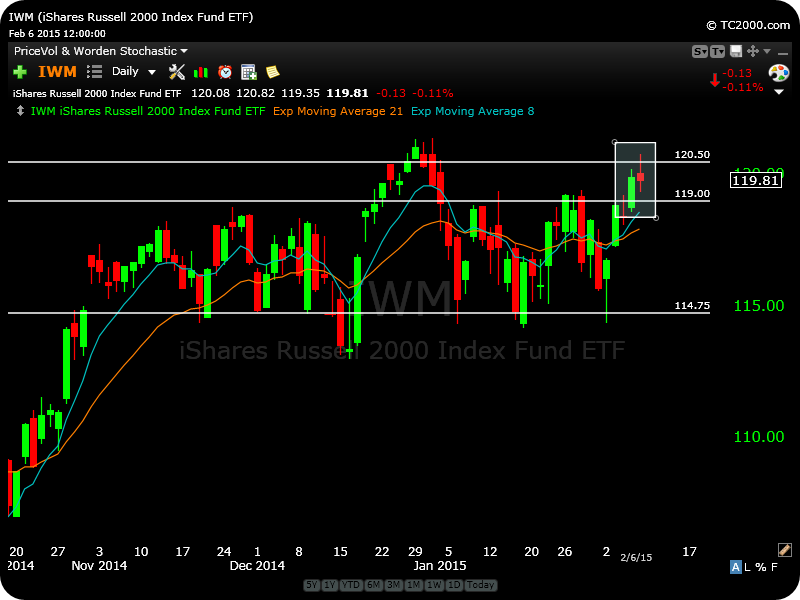 $IWM the smallcaps have been showing signs of outperformance all year long, and it should be no surprise with this week’s failed breakdown, the Russell led the charge higher and was first to break above a key resistance area. We still have prior resistance to deal with between 120 and 121 but the volume traded up there is much less than the important 119 we cleared this week. So while the bulls are not out of the woods yet, the $IWM certainly looks to be in front of the pack. Continuation next week will be important for the bull case, let’s see what we get. 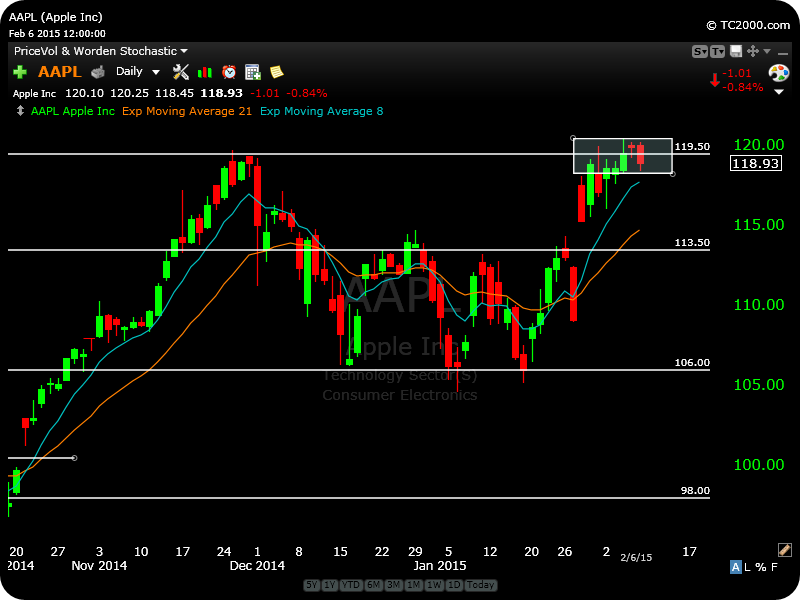 $AAPL continued to show signs of strength this week on the back of their blowout earnings. Apple was up about 1.5% on the week but the previous highs around 120 are still giving the bulls some hesitation. The fast moving averages are still trying to play catch-up as denoted by the light light blue line on the chart. Bottom line, flirting with all time highs is always a chart I want to see if I can participate in to the long side, so another day or two of sideways up here and I would be interested in picking up Apple on strength above Friday’s highs. 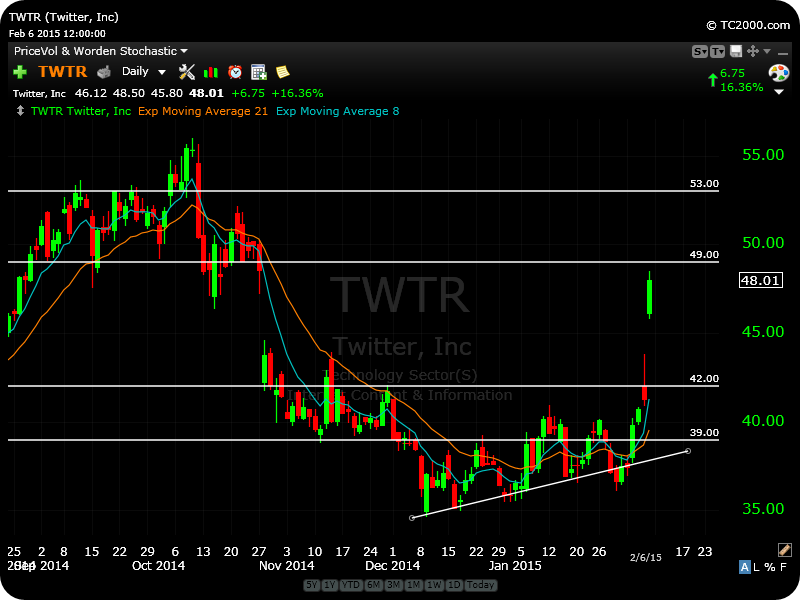 $TWTR earnings are out, and the market likes what they had to say . An explosive upside move that cleared all previous resistance levels and created an island out of all of the trading for the past quarter in Twitter. It’s currently trading in a relatively thin area of previous price action and the next zone of overhead supply is just above between 49 and 53. By the looks of it, the bulls have reversed the relatively negative bias Twitter has been trading with for the past few months, and it looks to finally be back in play on the long side going forward so long as we can see this gap maintained. 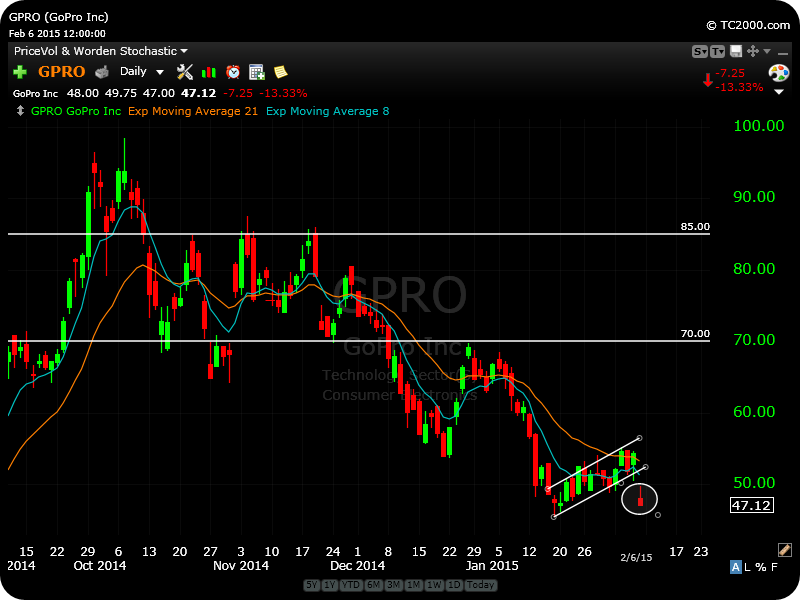 $GPRO a tough session for GoPro this Friday after reporting earnings, and trading down some 13% and closing on the lows. Technically, looks like a very clean bear flag breakdown and we’ll need to see if the dip buyers step in again around the recent $45 lows. GoPro continues to make lower highs and lower and lows, and until that changes it’s an avoid or short candidate in my book. There’s significant support around $38 from it’s post IPO days, and perhaps the market is bee-lining for that area before any serious reversal attempt. 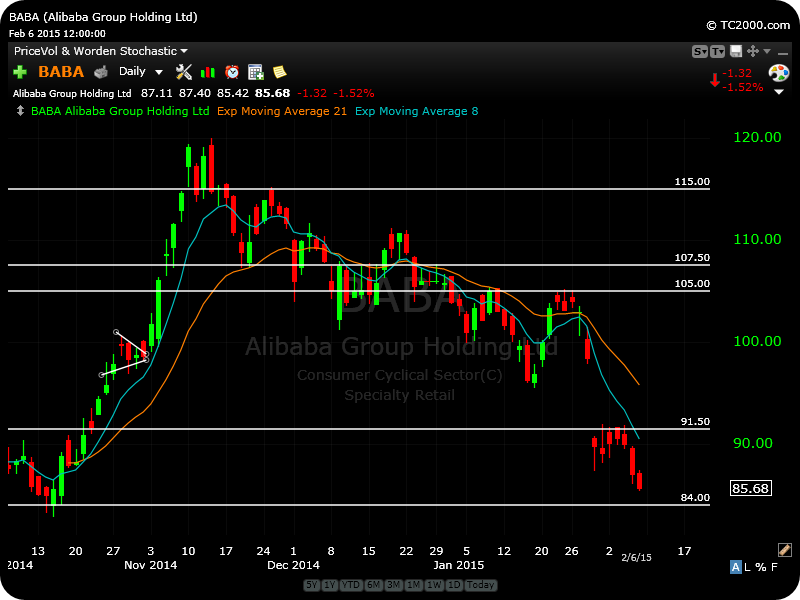 $BABA more downside continuation here for Alibaba after its earnings were seen as a disappointment by the market. We can see that Alibaba closed the week on the lows, and the buyers were not able to make any progress into the earnings gap, making this 91.50 area an important level to clear if we are to see momentum return to the upside. On the downside, we have that $84 all time low area right below us which seems like a high probability of getting tested this coming week. Bearish open gap is in control, trade accordingly.