bulls, this is what you have been waiting for! 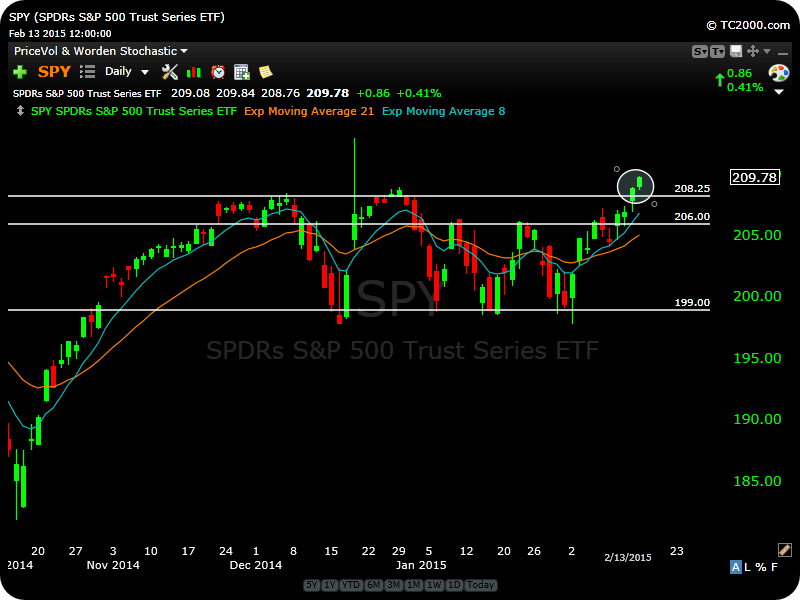 $SPY so here we are, the second week of February finally seeing some resolve out of this multi-month range dating back to December 2014. The breakout this week shouldn’t have come as that much of a surprise if you’ve been following the updates here throughout the week as we’ve been tracking this action really close using 206 as our line in the sand to prepare for a breakout. Tuesday’s candle gave us evidence that this market was prepared to move higher, and the rest of the week confirmed Tuesday’s candle as we closed at new all time highs in the S&P500. Can this turn into a false breakout? absolutely. But until it does, all we can do is place our stops at levels that invalidate the breakout and hope for continuation higher. But until (IF) that happens, I am happy to be involved in this move higher, especially given the amount of time we’ve spent in this sideways range. The duration we have been moving sideways suggests to me there has been lot’s of doubt created, lots of people who have been whipsawed out of this market, and lots taking positions on the short side, all of which provides added fuel for higher. Bottom line, this is what we have been waiting for! The market looks good and I will continue to stay with my longs until given a reason not to. 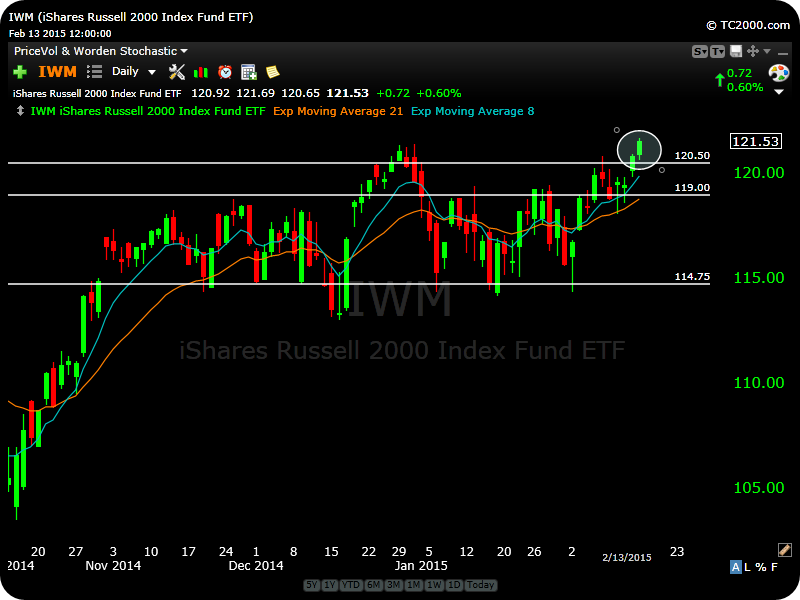 $IWM talk about bases, here’s a market that has been going sideways for an entire year. February 2014 we were trading at $120 and we’ve effectively been going sideways ever since. If this does in fact turn into a new sustained leg higher in the small caps, this can certainly set a bullish tone for the weeks and months to come across US markets. I got long early on Thursday TNA which is the leveraged ETF that trades 300% that of the $IWM. I’ve scaled a round of profits into the close on Friday but I’m looking to capture some more of this initial thrust higher out of this range. Looks good to me. 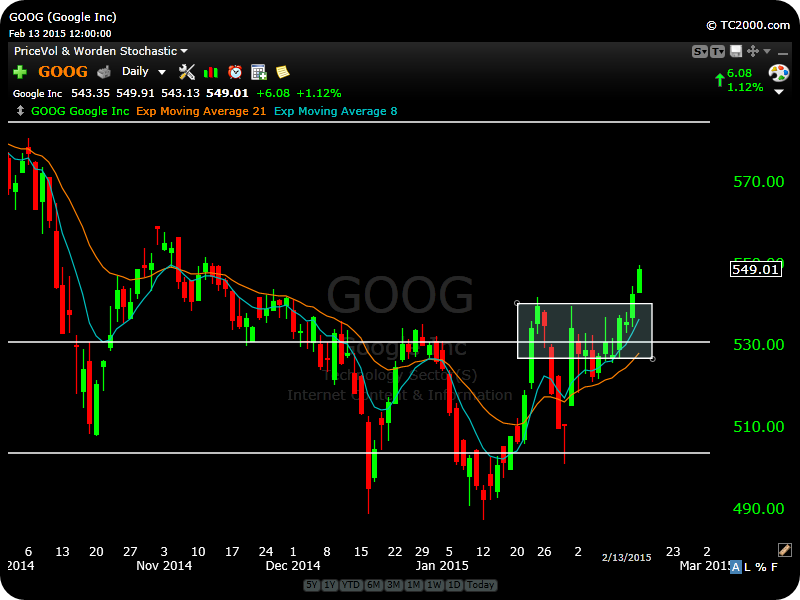 $GOOG cleared this cluster of topping tails above 535 and it hasn’t looked back. It’s heading higher into the middle of a long term range between 500 and 600 and it does have room to float with minimal supply to contend with until the upper 500s. Difficult to chase it now, but it certainly looks to be nicely in motion. No position. 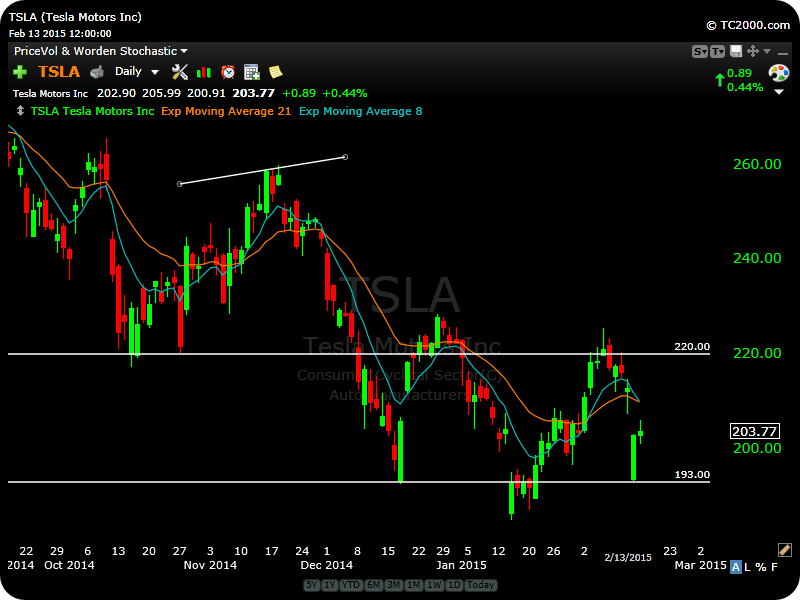 $TSLA reported earnings after the bell on Wednesday and the market initially has not responded favorably to some rather poor numbers, despite the company pre-announcing this was going to be the case. The action on Thursday however, opening on the lows and trading higher all day, does seem to show evidence there is some type of near term appetite for this stock in the lower 190s. Technically it looks like we’re going to stay range-bound between 190 and 220 over the short term and I think that will ultimately set us up nicely for a breakout trade in either direction over the next couple weeks. It’s on my watch-list, but no trade yet until it’s done with its whipsawing. 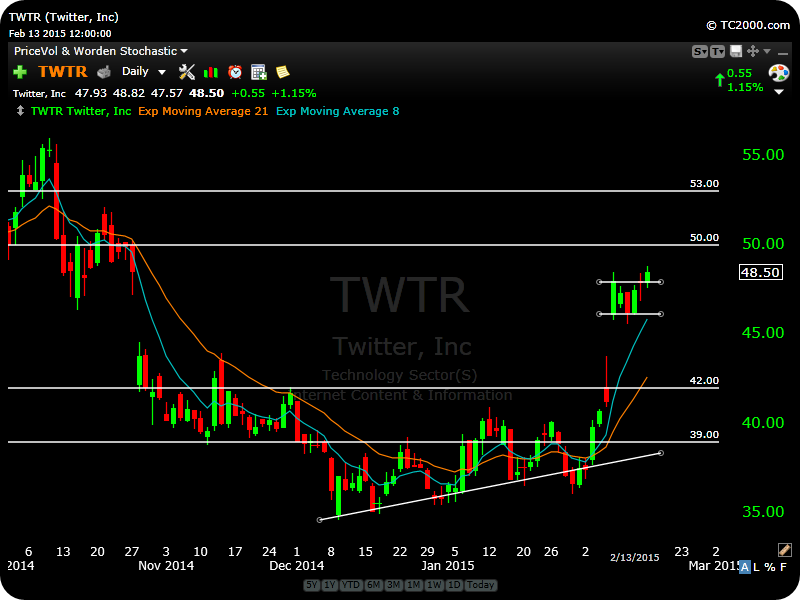 $TWTR the bulls have defended the opening gap now for an entire week and closed near the highs of the week. The action so far suggests there continues to be some pent up demand in Twitter and we could see these overhead prior resistance levels tagged in the coming weeks if we continue to respect recent support levels. It looks good here, a bit tough to chase, but with the opening gap just under $46 longs do have a clear spot to manage risk against. I do own twitter in a long term account but no active trading positions right here.