$SPY So in last weeks post, the end might be near but it aint until it is  I talked about SPY 170 being the near term level to watch if we were to see momentum continue to build higher for the bulls. We saw that level crack on Tuesday morning, follow through on wednesday and then stabilization for the rest of the week. It’s clear we have now carved out a short term range between 168.75 and 170 as swing traders decide whether to lighten up or use this pause as a buying opportunity. For us short term traders we want to measure price against these levels, and with price hovering in the lower 25% of this range we should be on the lookout for  buy setups coming into the week so long as we don’t see signs of a breakdown below the support zone of 168.75. If we start breaking down — time to step aside and wait for price to stabilize or look for that leg lower on the short side.

$AAPL well unlike the market there was no late week stabilization in Apple. It was in a downtrend all week long. Clearly an under performer relative to the markets and there’s no signs of a reversal higher. We will need to see some basing action before thinking of any long attempts beyond scalps and by the looks of it we will likely need to see a solid week or so of basing before that happens. And that is the best case scenario that assumes we don’t continue to slide lower in this downtrend. So aside from the obvious bearish action on this timeframe the only thing else to add is that for you longer term bulls we have essentially seen a straight line run up from 415 to 465 in 2 weeks so this 10-15 pt pullback off the highs coming from a 50 point move is nothing to get overly concerned with just yet. But as for us fast money traders, we know what we should be looking for. 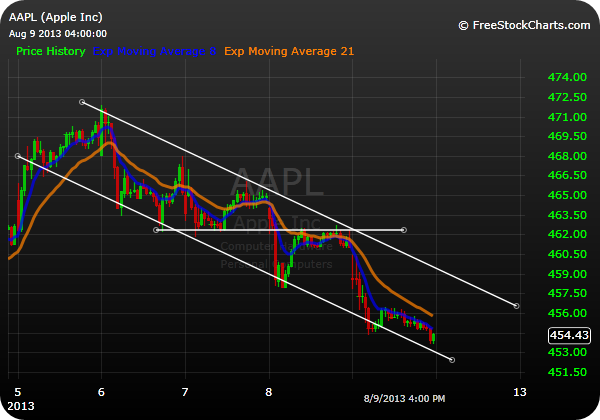 $GOOG A very similar story to the $SPY played out in Google this week as we saw some early weakness followed by stabilization. Within an even tighter range than the market, 890 to 896 are the levels to watch going into next week. 3 solid days of volume within this range should lead to a fairly strong breakout to the up or downside. Not much of an opinion on Google right here, I haven’t been paying much attention to it of recently but if I can catch this breakout next week I will look to get involved for a push in either direction. 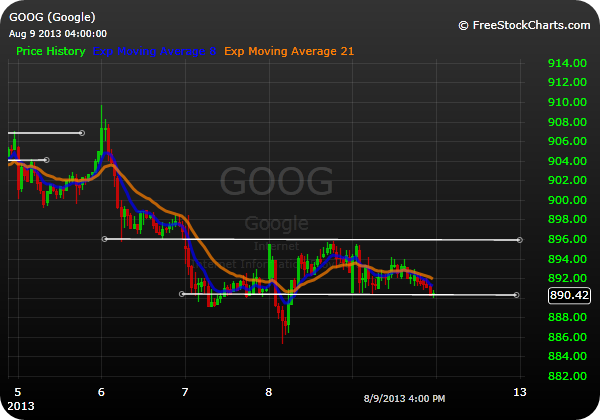 $NFLX So as most stocks saw early weakness we actually so Netflix breakout to the upside at the start of the week. From there it really didn’t do anything and we can see from thursday and friday’s action the ranges have tightened considerably. Given the fact it did hold onto most of it’s Monday breakout in a fairly lousy tape makes me continue to be bullish in this name. I actually do own some in my  “swing” account and so long as it can hang around/above this 250 level I don’t mind sitting in it. The levels are clear and the ranges are getting tight, I would expect some expansion to happen here soon. Will the great bull story of netflix 2013 continue or has the character changed this time around? My bet is in, lets see how this shakes out next week. 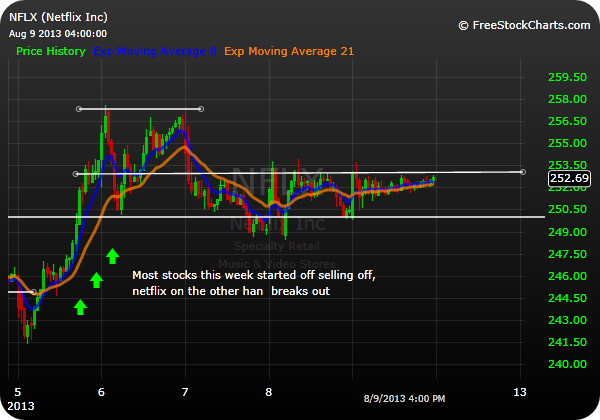 $FB Finally taking a week to digest it’s massive 40% 2 week gain as we can see price spending most of its time choping between 38 and 39 dollars. It wouldn’t surprise me to see a couple weeks of this tight range consolidation before gearing up for a multiday sustainable move. Longer term this is undoubtedly bullish but short to medium term it’s anybodies guess. It could retrace all the way to the gap at 33 and still be considered healthy longer term. Like many of the other charts this week, we have a clear sideways range in place to measure price against.

$AMZN Seeing alot of sideways around these levels lately which tells me there are buyers getting interested in Amazon below that 300 mark.  Short term it’s still bearish to neutral but we’ll want to monitor this name closely next week to see if that changes. The 300 level seems to be the mark separating this stock from neutral to bullish. I tend to think a reversal to the upside is close to happening so long as the market doesn’t break down this coming week. In addition to Netflix I did pick up some Amazon this week in my ‘swing’ account and I will be looking for that reversal momentum trade above 300 this week in my active trading account.