clear sailing to close out the summer

$SPY so in last week’s recap, I suggested waiting for breakout confirmation of the 194.40 – 196.60 range before adopting any directional bias one way or the other. Luckily for us it didn’t take more than Monday morning’s action which started with a gap up right into 196.60 resistance which soon was taken out as the day progressed. For the rest of the week the market sailed higher, taking out the previous all time highs and setting a new closing high record. The bulls really have mastered the art of the v-shaped rally. After spending the majority of the day on Friday digesting the recent run up, the market is finally showing some signs of being human and needing a pause in trend. This 199 level could serve as short term support; meanwhile, intermediate support is closer to 198. With a strong uptrend, broken resistance levels and new all time highs, there is a lot to like in the bull camp right now. Going into next week we’ll want to keep an eye on our support levels here as we wait for the market to fuel for continued trending action. I’d put my bullishness on hold if there’s a break below 198; otherwise, it’s all systems go looking ahead. The market proved itself this week and you’ve got to respect that, until given a reason otherwise. 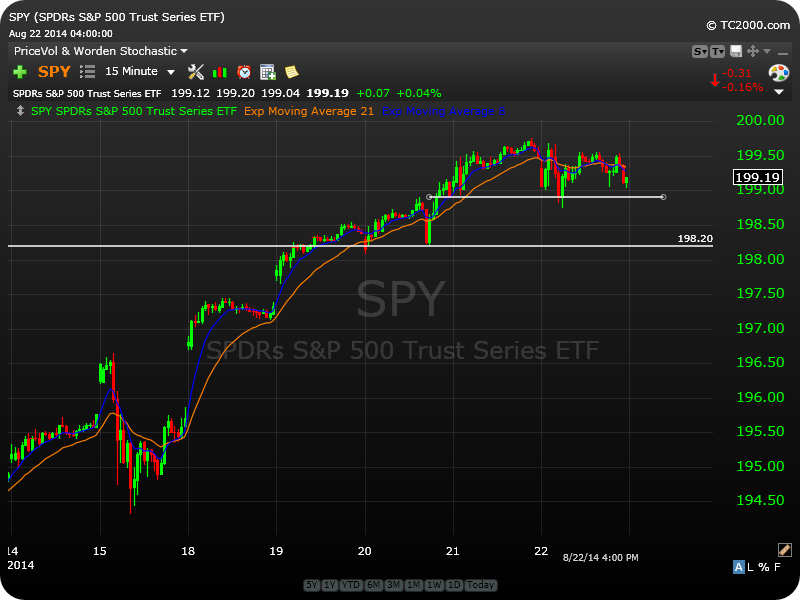 $AAPL back to a triple digit stock, Apple marched higher all week, took out the previous July highs and set new all time closing highs this week regaining its leader status in the markets. This is a great looking chart , making higher lows and higher highs on every time frame. We had a mini 3 day head and shoulders topping pattern by Friday but you can see that pattern failed to trigger and we bounced higher taking out the highs and began basing above 101. I’ll be looking for long setups next week in Apple for day trades, looks great. 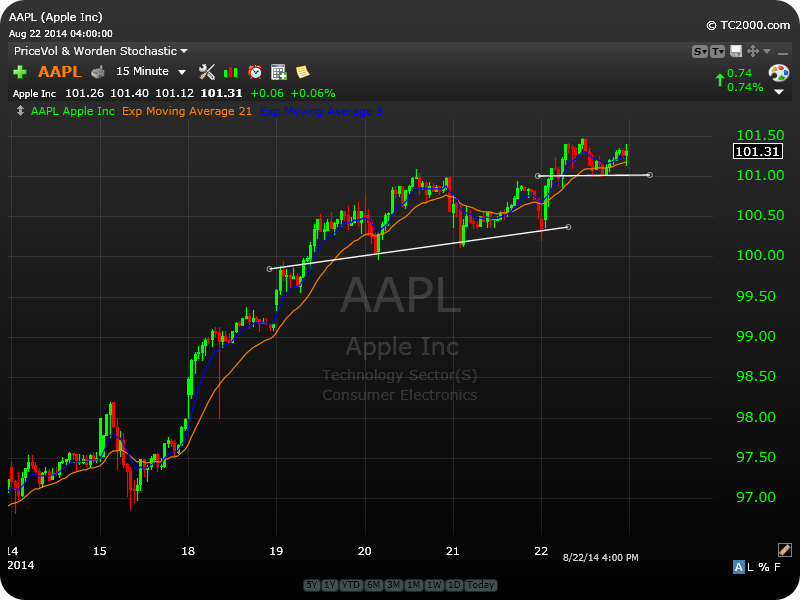 $NFLX another name making new all time closing highs this week was Netflix. We’ve had this on our radar for the past couple weeks and this chart just keeps looking better and better. Trending higher in this rising channel Netflix continues to help lead the market higher. There’s not much to dislike here, all time highs, breaking resistance, respecting support, just got be on board for the ride higher. Looks good. 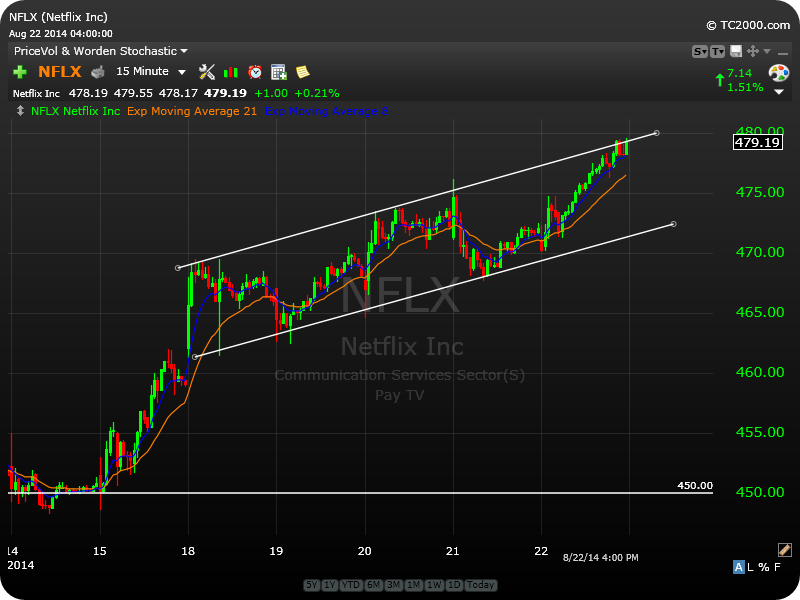 $FB didn’t get the upside follow through this week like Apple and Netflix did but it still remains in a bullish intermediate trend. Facebook spent most of this week pulling back and retracing but it did so in a relatively constructive manner. Friday’s action started off ugly when sellers finally snapped 74.50 support and sank the stock a dollar in a matter of minutes. But they filled the open gap back  from the 18th and as the day progressed the buyers stepped up and reversed the entire breakdown and closed Facebook right above support. Perhaps this was the last little shake out Facebook needed before setting itself in motion for higher prices. That’s not a prediction I’m acting on, I’ll need to wait for the market to confirm that. Above 75 would get me involved in this name otherwise I’ll be avoiding the chop. On watch. 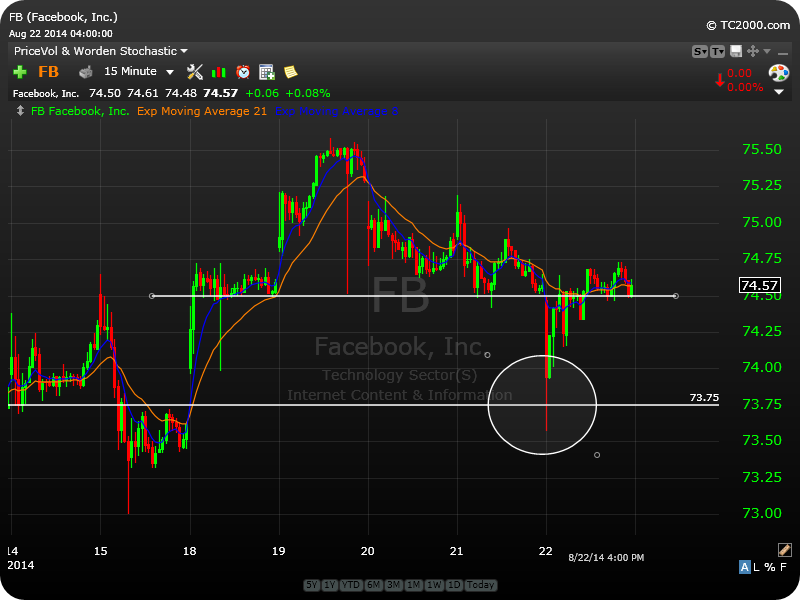 $TWTR such a textbook looking pattern here. Day in and day out this week Twitter tightened up in this triangle fueling up for a directional breakout as the rest of the market sailed higher. It wasn’t until Friday early afternoon when Twitter made it’s move out of this range and broke out to the upside going on to close the day on the highs. This is a name I got long at 45.30 and I’m continuing to hold it for a swing. Twitter looks great here, and I’ll be looking for some follow through next week towards those earning highs at 48. If you want instant trade alerts delivered to you just like this then you should really consider signing up for one my premium trade alert services that fits your time frame. 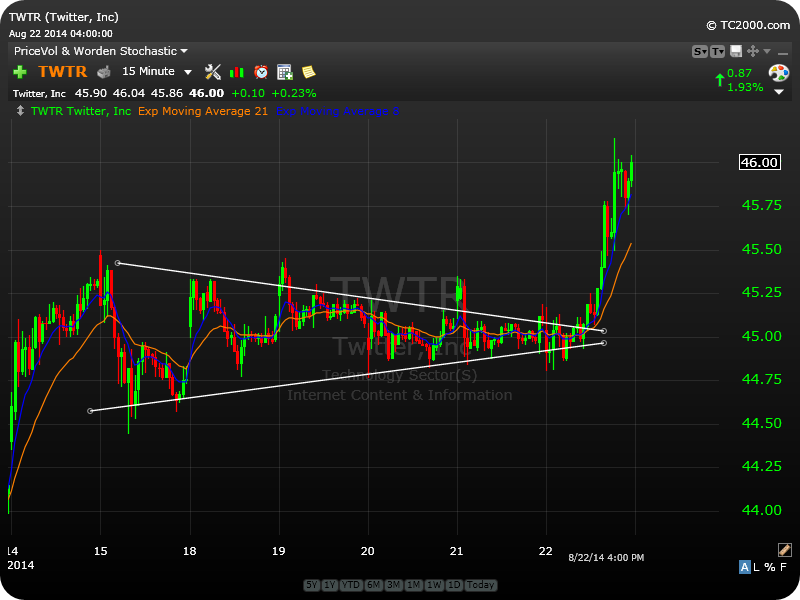