cracks beneath the market surface

$SPY the first full week of November started with some warning shots to the overly complacent bulls who enjoyed a relatively effortless drift higher throughout the month of October. Last week in my recap, sluggish leaders and what to look for into year end,  I noted the YTD leaders were showing signs of sloppy price action and that we should be on watch for further weakness going forward. They held it together for the beginning of the week until Thursday where we saw a broad based market sell off with high beta tech leading the way down. Friday was certainly impressive as we recovered virtually all of those gains in the indices despite many key individual names lagging and remaining weak. Impressive but concerning. The market is signaling the importance of these price levels and the message it is sending is to tighten up your long exposure and get MORE selective in your holdings. $TSLA, $FB, $AMZN, $GOOG are just some of the names that saw mini bear raids this week that did not recover their losses by week end like the indices. Huge problem? No, but little by little these are how cracks form in the markets and before you know it we could see another 1.5% down day followed by more selling rather than a reversal. I am not turning into a bear, rather just calling the shots as I see price action develop. We are in a range here from 175 to 177.50 within the context of an uptrend so the key is to not get chopped up while we remain within this range. Get selective, buy low, sell high, manage risk. 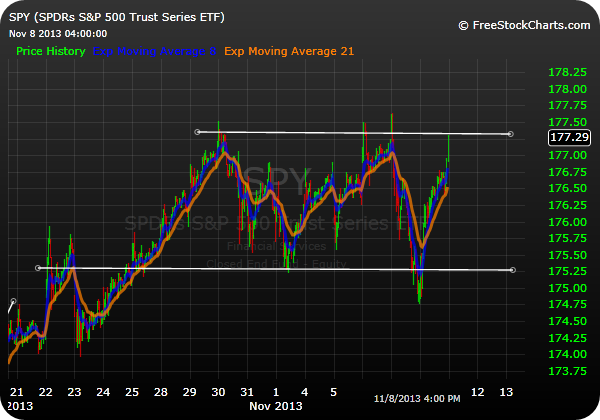 $AAPL expanding the time frame here in Apple to more clearly demonstrate the bigger picture. Apple remains very healthy trading inside of this descending triangle after a great run up into earnings from 490 all the way to 530+. It has not done a whole lot in the last 3 weeks but given where it has come from and how price is holding up despite thursdays high beta bear raid this is one of the good looking long candidates. The levels here are pretty clear, a close above 525 or below 515 could ignite the next multi day move. My sense is the overall market direction will play a role in how long it continues to trade within this range and ultimately which way it breaks. I have had no swing position in this name since selling it pre ipad announcement around 517 back on the 21st of October. Waiting patiently for another setup. 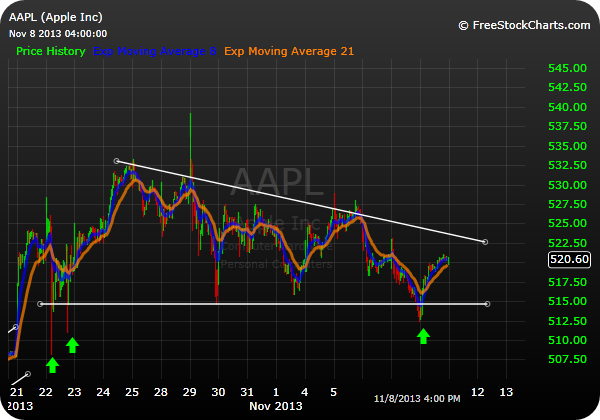 $GOOG one of the weaker names on my list and one that stopped me out of my long position I picked up last Friday. I was using the 1025 level as my crayon in the sand and I ended up booking the loss around 1022 for -6 or so.   This does not interest me much at all anymore as it now more deeply buried within a larger range from 1000 to 1040. But perhaps as other traders leave Google for dead around here that could have been precisely the shake out the bulls needed before this gets going again. Back above 1025 and I would become more interested, otherwise I need to see lower prices. 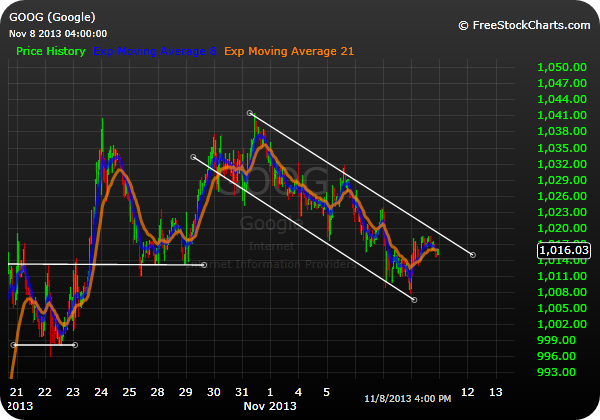 $NFLX we saw the bulls try to accelerate out of this channel on Tuesday as price broke into the 340s but the momentum just couldn’t be sustained. Netflix rejected higher prices, fell back into the channel and found support at the lower trend line. Still sort of a neutral holding pattern overall and it doesn’t interest me a whole lot one way or the other for a swing setup. I’ll stick to daytrading this name. 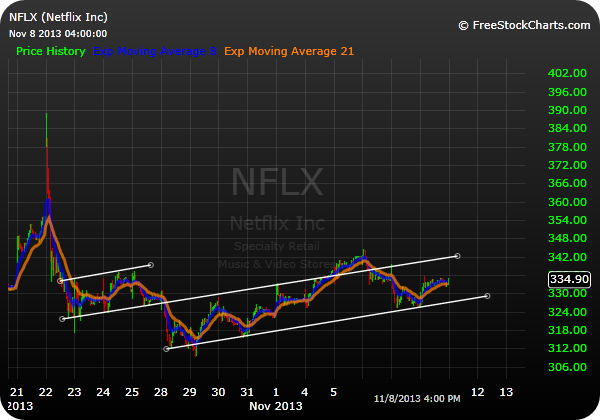 $AMZN i have been watching this sideways consolidation since it’s earnings gap a couple weeks back and on Thursday we finally saw a breakdown lower filling part of the gap. The bulls did a nice job rallying this name back on Friday so going into early next week I will be watching closely for a possible retest of the breakdown level around 355 for trade setups. 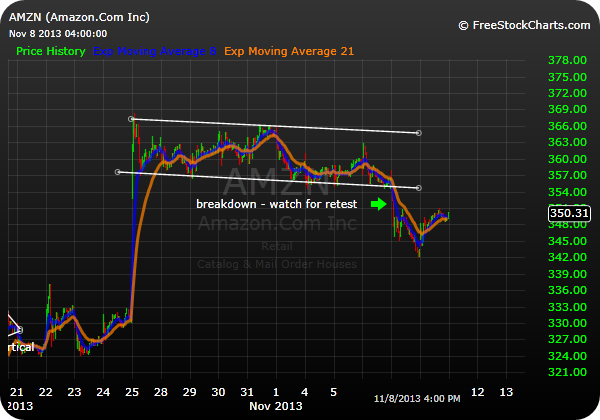 $FB one of the more concerning names this week was Facebook. Lower highs and lower lows, the bears kept pressure on this name all week. $47 is the line in the sand for the bulls to hold onto otherwise the next major support levels don’t come in until 42-45. I am keeping an open mind here that we might just be in the process of one more violent shake down which could result in some explosive action higher. Perhaps a gap down on Monday sucking in some shorts and capitulating weak longs below $46 before a powerful reversal higher creating a double bottom with the 31st? Time will tell, top of my watch list for Monday. 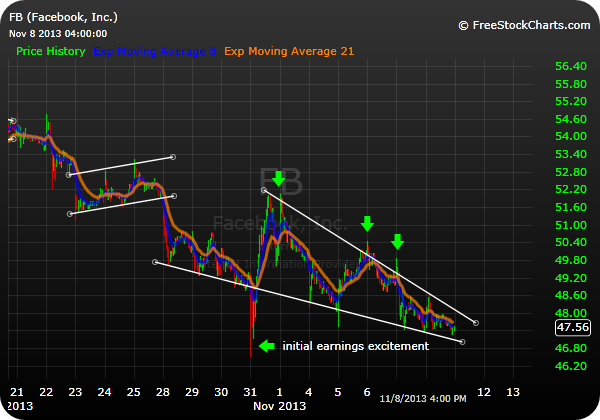 $TSLA another name that makes me concerned for high beta land is Tesla. Large gap down off of their earnings report followed by more reports of vehicles on fire causing  the bears to party all week in this name. Slicing through support left and right Tesla sold off on nearly all time record weekly volume. A very tradable intraday name however its tough to take a position one way or the other for a longer term swing hold. Catching a falling knife is always a sexy trade and it’s not clear whether or not this knife is one that is ready to be caught. I love this sell off for an opportunity to get involved for a longer term hold but I am not ready to stick my neck out at these prices. I’ll stick to day trading for now and this along with Facebook is at the top of my list for next weeks trading vehicles. 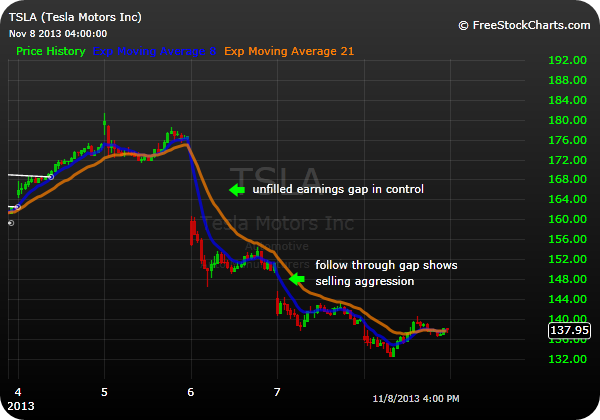