$SPY so in last Sunday’s recap bear raid on growth names, rotation or exit? I talked about the sell off in growth names across the board and I made the point for the second week in a row not to over complicate the analysis on the intermediate/long term view of the indices right now. Take a look at this pattern on a 30 minute chart of the SPY and tell me what changed? We tried to make a run on the highs and breakout this week piecing above 189 resistance off the unemployment number on Friday but ultimately failed and rejected back into the 6 week long trading range. But is that the whole story? Let’s be sure to understand the big picture of what’s been going on the past month. While the SPY has been living a relatively balanced life for the past 6 weeks there been a growing divergence between it’s QQQ counterpart and that divergence has accelerated over the past two weeks. Again I ask the question, is money leaving the market or is it rotating it’s way to the less cool sectors right now? IE the utilities which managed to close this week at new 6 year highs. Regardless of the answer to that question, in periods of rotation you don’t want to see a flee for the exit door all at once like we are witnessing in a number of names right now ($NFLX $FB $AMZN $GOOG $YELP $FEYE) just to name a few. Those are some big names to be experiencing this kind of multi week intense selling pressure. So it’s safe to say there’s definitely alot going on under the market hood that this innocent looking $SPY chart is not leading on right now. Whether or not the growth name sell off will spill into the other sectors of the market has yet to really be seen. As far as the SPY goes, the levels are clearly defined for you. 189 as resistance is absolutely the mark to watch now that we saw such a strong reaction at that level and on the downside we have the ever important 184.50 that is acting as our high level support. Keep an eye on these levels next week along with the $QQQ for clues on whether or not this market is just getting started to correct or if the worst is behind us. 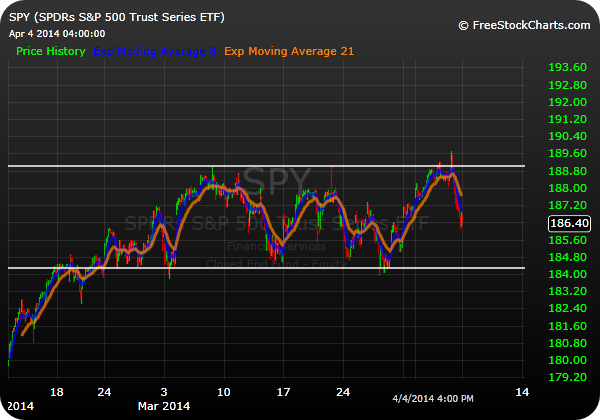 $AAPL expanded out the time frame in Apple to capture the last few weeks of price action. On a relative basis Apple really hasn’t got whacked as hard as it’s counterparts have over the past few weeks (mostly because the market doesn’t price this as a high growth name anymore). It’s basically dead in the middle of a range and broke below a short/intermediate term 535 support level on Friday. It’s anybody’s guess right here in the middle of this larger range, could go either way. Above 535 and I’ll probably look for some shots on the long side but really it’s pretty boring right here and now. Perhaps we have a few more weeks of these price levels to slog through before earnings set up the catalyst for the next directional move. 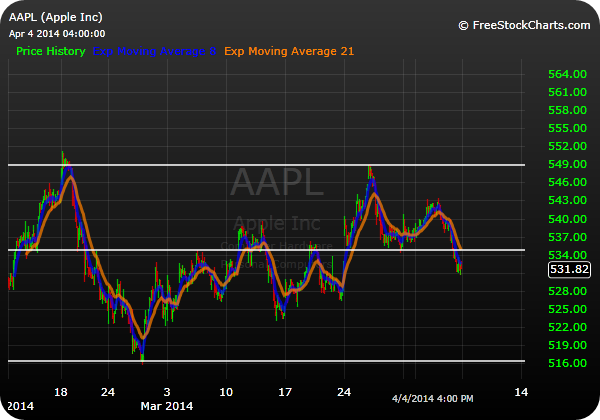 $GOOG saw some pretty intense selling on Friday post its 2 for 1 split as price settled right down into a support pivot we put in earlier this year at the end of January. Google is a broken chart right now and overall just an avoid. Price needs to settle down a bit before I would consider any position either long or short. Remain patient, there’s plenty of time to get involved if you have been waiting to buy Google on a dip.

$NFLX continued it’s waterslide lower as it ended the week essentially filling the large earnings gap from earlier this year and almost kissing the 200 day simple moving average. There’s no real constructive reasons to buy Netflix just yet although there are plenty of cases to make for an oversold snap back rally at any point now. Just remember if you are going to play the knife catching game be sure to position size carefully and allow yourself both time and room in the event that you are early in picking a bottom. While the volatility is elevated in a name like Netflix it can bring about some nice day trading opportunities but from a swing standpoint it needs alot of time to set up something more constructive for my liking. 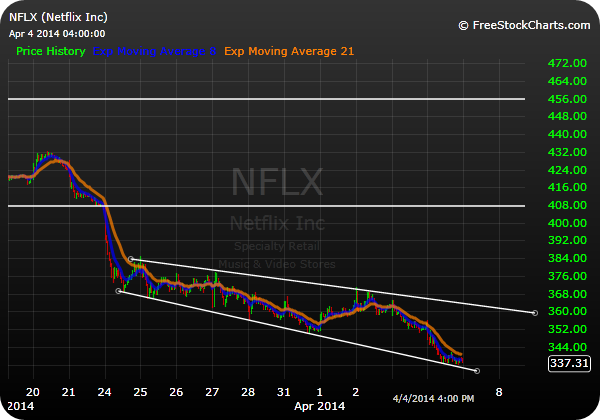 $FB same chart from last week here as Facebook failed at short term resistance and broken down from last weeks mini rising channel. It settled in on Friday right below 2 support levels I had drawn from a couple months ago. Facebook is trading in the middle of an open gap dating back to January of this year and price would need to trade below $55 to consider that gap closed. I do believe this is an opportunity in the making for the longer term bull market Facebook is in the midst of but again knife catching and hoping for the best is a dangerous strategy. Let it settle. 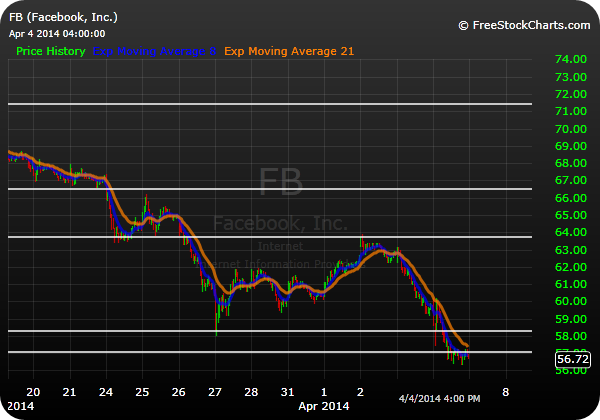 $AMZN continues to act poorly ever since it broke down from the rising wedge back around 365 2 weeks back. Friday’s sell off came with some pretty heavy volume for the stock and it did manage to close about 5 points off of the lows for the day. Perhaps we are seeing some short term selling capitulation in Amazon but it’s still got it’s work cut out for it as this chart remains in a clear downtrend and relatively broken state. I would like to see Amazon reclaim 330 before I took any shots on the long side for a quick trade. This was one of the first to breakdown in high beta land so perhaps it will be the first to signal a short term bottom in a number of these names. I’ll be watching 330 next week. 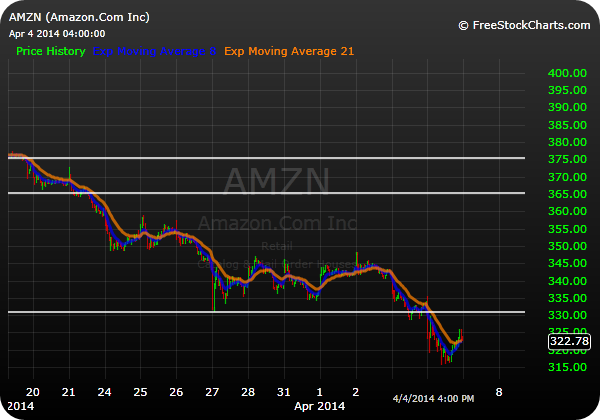 $TSLA as far as growth names go Tesla remains one of the most resilient so far. Long term the trend remains in tact despite the recent sloppy price action. It seems like we’re carving out a large volatile range here from the lower 200s all the way up to about 235. When a range is this wide I tend to sit back and let it settle down and tighten up before looking for any setups. I was long this name coming into the week but I dumped it early on for a small gain and moved aside. I like that this name is still holding its longer term support levels and it’s appealing that there hasn’t been a whole lot of technical damage done. This usually means this could be one of the early emerging growth names to resume its uptrend when the coast is clear. 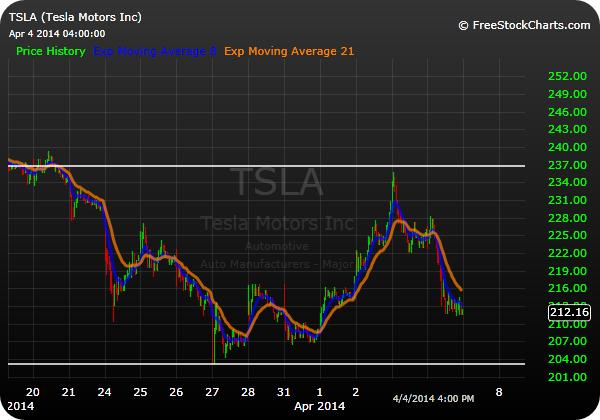