double top or just a pullback? 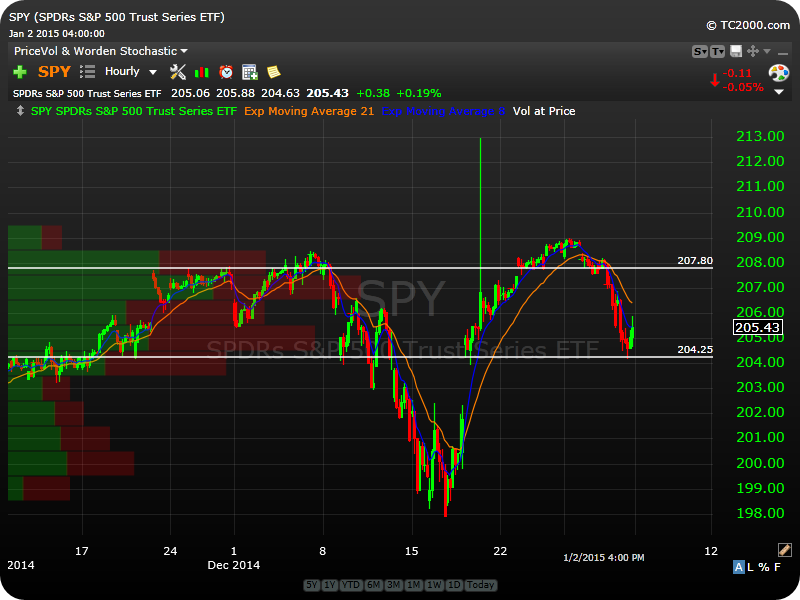 $SPY everything was sunshine and lollipops for the bulls as described in last weekend’s market recap but that story hit a bit of a speed bump this week as we broke below high level support and continued to slide lower on the first trading day of 2015. A little bit of a pullback is underway here and the lows on Friday tagged our next level of expected support around 204.25 which is also the top of the 12/18 open gap. With the first full week of trading in 2015 on deck, it will be interesting to see which way the market leans from these levels. The bearish scenario would be a double top at the 208 highs which could lead to further sideways or down corrective action. And on the bullish side of things this could just become a shallow pullback or gap fill pivot higher low before we make another run at the highs. In any case, all we know right now is the short term momentum is lower with an immediate risk range of 204-208. The gap fill is an obvious target for the bears, but let’s see what happens when the big boys return next week. Neutral market view seems appropriate for now, meanwhile continue to keep an eye on names that are holding up during this pullback. 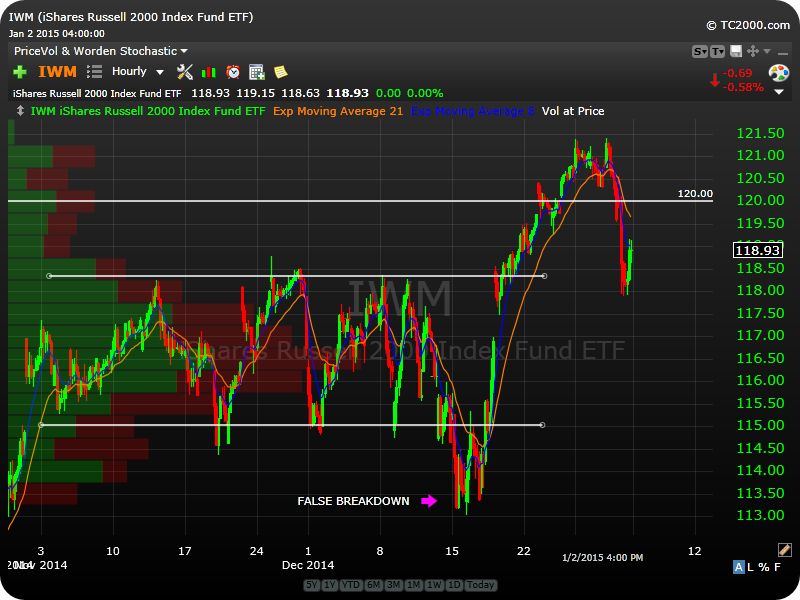 $IWM prior to this week, the small caps were the bright spot for the bull thesis as the $IWM finally looked ready to break out from a year long range and run higher. After this week’s candle it looks like that train has to be put on hold until further notice. A convincing break back down into the messy range will put the bulls back on the defense until we can reclaim 121+. The tail formed late on Friday is some mild evidence of interested buyers around these levels but we’ll need to see them do better than that before this market really gets going. On watch. 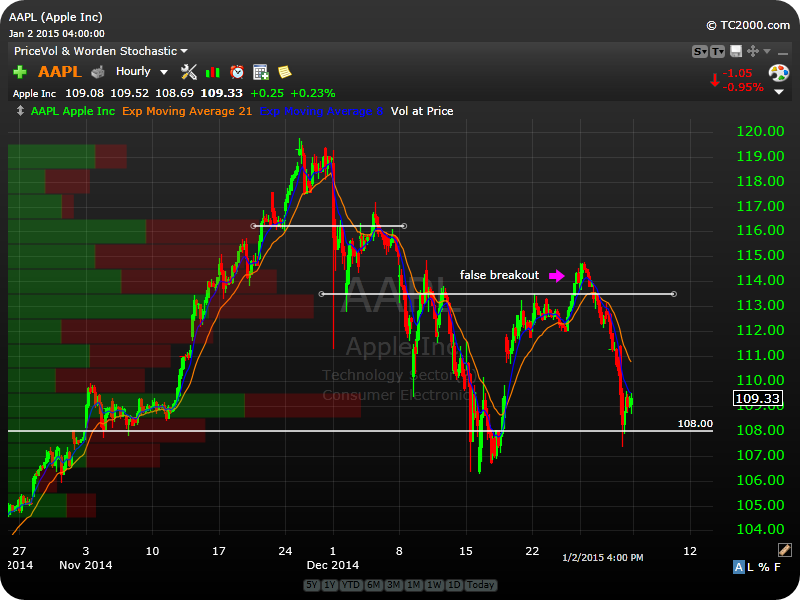 $AAPL the breakout above 114 proved to be one big fakeout as the bears quickly reclaimed control and broke Apple back down nearly retesting the December lows. I was long Apple coming into the week but was quickly stopped out Monday morning for a small loss.  The risk range in Apple is wide right now and I’ll need to see more price action develop here before getting too interested one way or the other. 106-108 is our band of expected support and on the upside 114 is the next intermediate level to have on watch. Needs time. 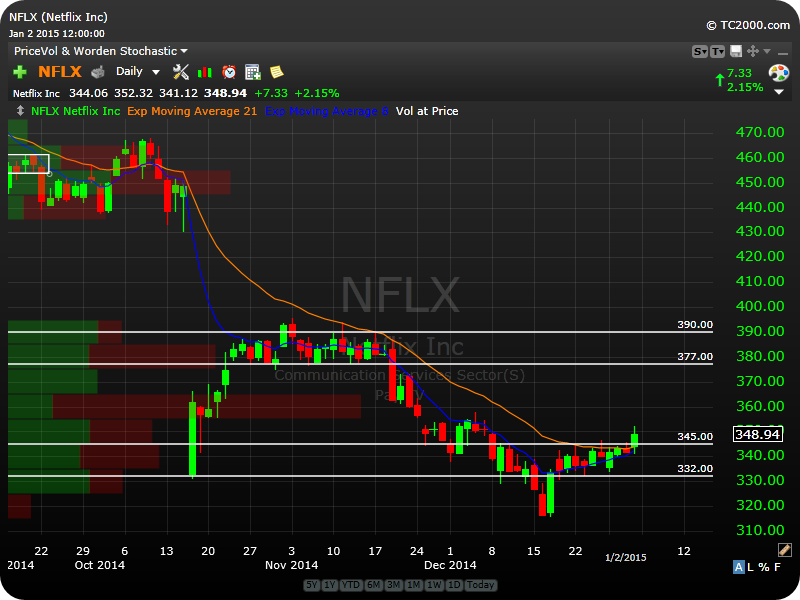 $NFLX off to an early lead versus its high beta counterparts. Netflix kicked off the year clearing some resistance at 345 and closed strong given the markets weakness. Netflix is still a relatively damaged chart from an intermediate standpoint. There remains an open bearish gap from last earnings report meanwhile this 330 area appears to be a spot the bulls are happy to step in. The risk range is wide now as the next major level of resistance isn’t until 380. Still a bit messy for my tastes, but looks good for further upside if the bulls can hold the 345 breakout level. 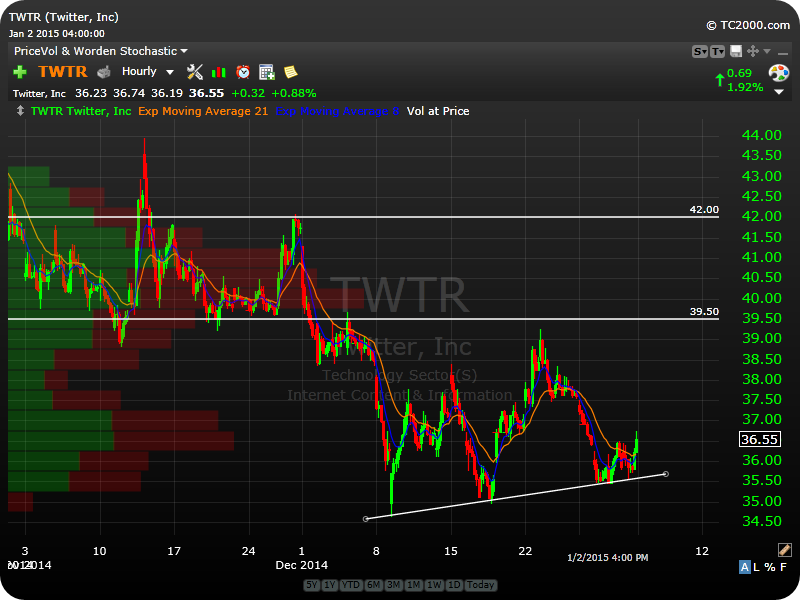 $TWTR another name that started off the year on a good foot. Twitter has continued to struggle ever since its last earnings report back in October but you can see some support trying to firm in here around these $35 lows. The range is still a bit wide and sloppy right now but 35 to 40 is what you’ll want to have on watch. The bulls really don’t want to see the 35 level tested a fourth time so it’s important for them to keep this near term rally alive. Overall the name still needs some more time but don’t lose sight of it for too long.