earnings bangs and a preview of whats to come

$SPY so last week in my post why the market is ready to leave you behind I outlined a few reasons why we could see a melt up into year end and why that scenario carries reasonable probability of following through. After a powerful two week V shaped rally in the markets we closed week #3 again at new all time highs. Few notes to make here as we close again at highs. Sentiment, however you decide to measure it is always something to be conscious of whenever you are deciding to put your money at work for longer than a day trade. And because of that I am always interested in trying to figure out what is considered “consensus” when looking ahead in individual stocks and the indices alike. The point being, if everyone starts adopting the year end melt up thesis and are positioned accordingly, well then who exactly is going to be the driver of higher prices if the “majority” of traders are already long and expecting higher prices? I do not want to tangent out on this topic too much within the context of this post so the point is, while I do still believe the year end melt up thesis is well in tact, we should stay very aware of the overall sentiment of other market participants. You want to see people hate the rally, you want to see them complain on “how we got here” and you want to see people fighting the move. We had one red day on Tuesday and that was reversed the very next day by the bulls which then saw continuation into the end of the week. The action back to the highs was in a very grind-like fashion with lots of overlapping candles. It’s possible we are carving out a range here at the highs and it wouldn’t surprise me at all to see more digestion and even downside action before more continuation to the upside. I am not a perma-bull by any means, just calling it as I see it while maintaining an open mind and flexibility. 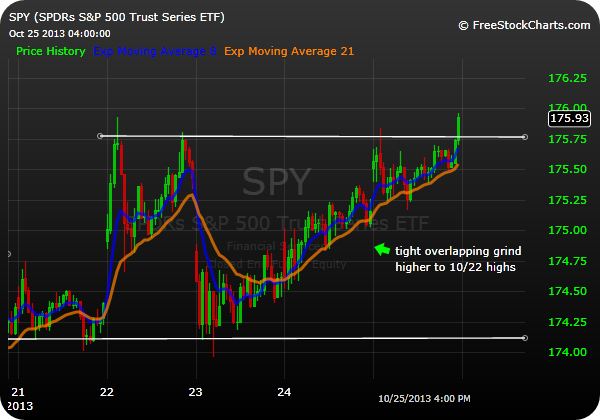 $AAPL more continuation to the upside in Apple this week with a pickup in volatility surrounding the event on the 22nd. It came out from their Ipad event relatively unscathed and it continues to act well after breaking out from the 492 resistance level last week. The technicals will once again be put to the test on Monday as Apple announces in quarterly earnings and outlook for following quarter(s). All things considered this name looks great going into their numbers, as it is above the August highs made around 515 and it is back to positive YTD. There is a pretty nice volume null now that price has cracked above 515s all the way to about 550 where apple would likely run into a bulk of overhead supply. On the downside it seems like the bulls are still in buy the dip mode and have been since the July lows. As for my position I sold everything (prematurely) on the opening breakout on Monday into the 517-518 level for a +30 or so gain. Not really interested in holding stock through earnings so I will be a happy spectator ready to evaluate the action come Tuesday. 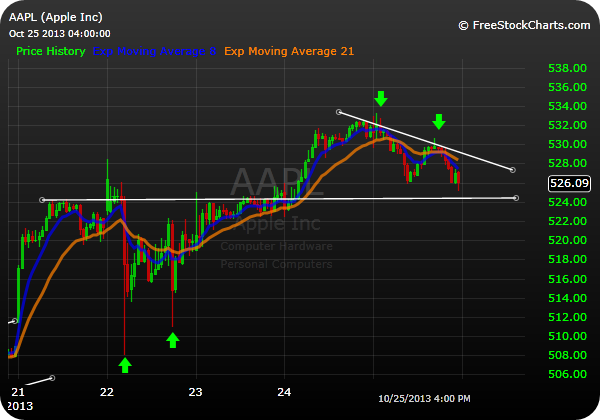 $GOOG saw some early continuation coming into the week but the bulls just couldn’t keep the new highs coming as it finished  just about where it started, printing an inverted hammer on the weekly chart. Google just last week had that large gap higher after earnings blasting price above the $1000 so it is not surprising to see price settle in a range at these new high levels. Going forward we will want to see where the bulls step in and begin to support price again and reverse the action back to the upside. The first real support test should come in around $1000 and on the upside you have 1035-1040 level to break through for new highs. 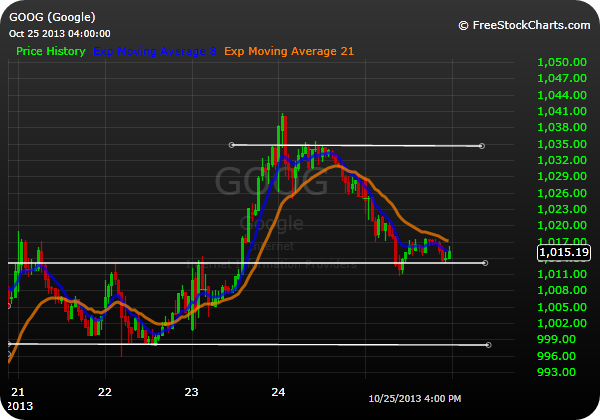 $NFLX what a tremendous earnings fade in Netflix on Tuesday as the sellers came out with both hands unloading their profits into the earnings gap higher. This was a real dangerous snowball that just seemed to build energy to the downside throughout the day on Tuesday especially for any  knife catchers attempting to find a quick snap back bottom. On Wednesday we saw that nice 20 dollar drive higher off of the open and for the rest of the week we went sideways in what is yet to be determined to be a bear flag continuation lower or a base and reversal higher. We will need to monitor this base closely and see how much longer it spends digesting. The breakout direction of this next move could be very telling as to how this stock acts going into year end. 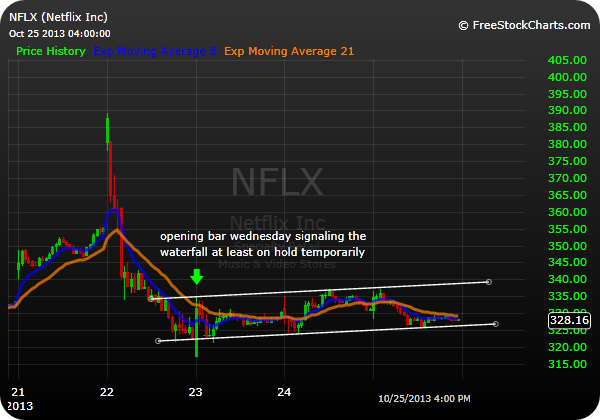 $AMZN another technology earnings pop to the upside but this time the post ER action was a mix between Google and Netflix. Instead of ramping higher or rolling lower it simply coiled into a triangle as we now await a breakout in either direction. Amazon is at new all time highs with a 20 point gap just below the closing 363 print on Friday. It will be interesting going forward to see if the bulls can defend the gap and make progress to the upside. I need to see more action here to gain an opinion in either direction but obviously this action favors the bulls on longer timeframes. 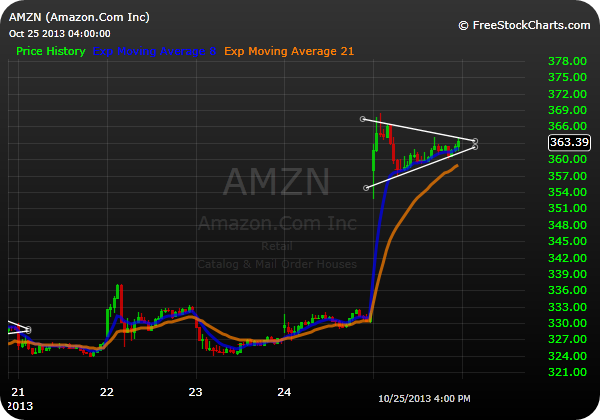 $FB overall not a great week for the bulls in Facebook short-term however on longer timeframe charts there is still virtually no damage done in this name. I believe the close near the lows of this week combined with the overall sloppy price action and wide range candlesticks speaks to the likelihood profit takers are stepping out of the way before the earnings announcement this coming week. The lows at 51 will be an important level to hold next week but of course with earnings scheduled for the 30th this name you can kiss all of the near term support and resistance levels goodbye as this stock will probably be making a 5%+ one direction or the other. Sidelines for me, I will re-assess after the report. 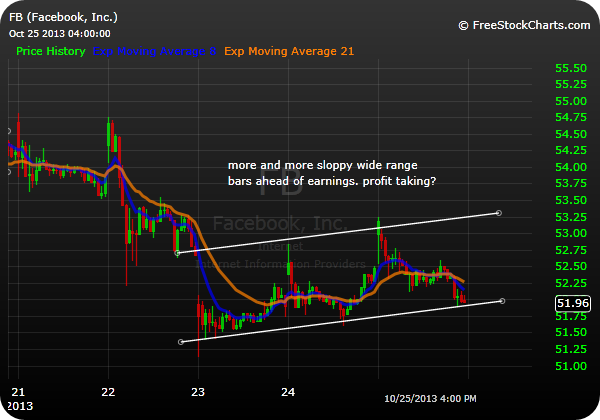 $TSLA not a great week for this 2013 leader either but bulls did manage to close us off the lows and form a potentially encouraging reversal setup going into next week.  Near term we have this inverted head and shoulders pattern with a declining sloped neckline at about 172 to trigger a breakout and measured move to the upside. Longer term we put in what could possibly become a double bottom low at the 160/161 level and price could be ready to head back to the highs for a retest. Time will tell in this name but I will be watching closely next week for this reversal breakout to trigger a long setup. 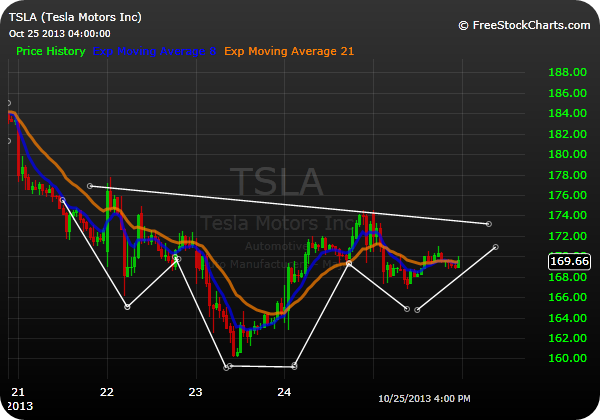