Embrace this rally while we have it 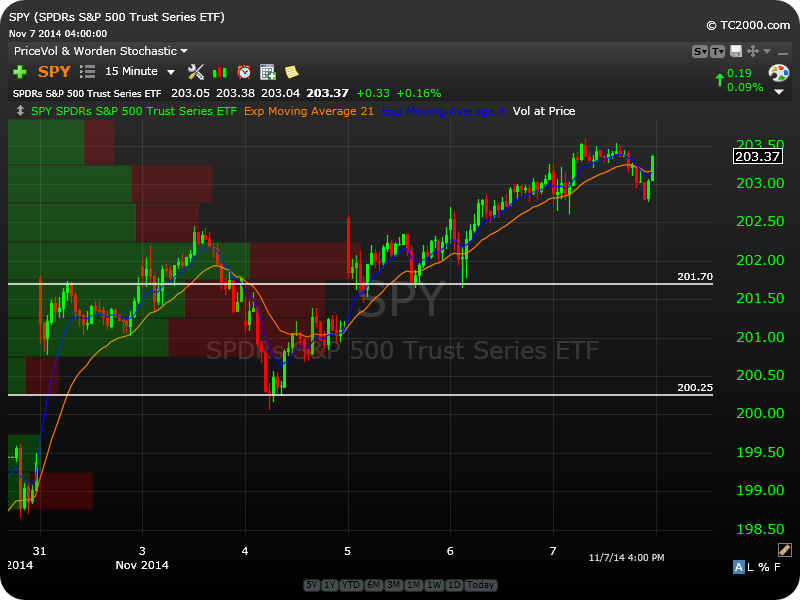 $SPY this latest leg to new all time highs is now 3 weeks old, and we’re still grinding out new highs with virtually no pullbacks to allow in dip buyers or let any trapped shorts off the hook.

Throw in the fact that we are at new all time highs, sentiment split at best, and this gives the market the perfect environment to grind higher as the majority of participants sit on the sidelines having missed the move entirely, sold early, or continued to fade this move.

So does this mean I’m blindly bullish up here in the permabull camp?

There’s no reason to be bearish yet. Can some horrible gap down happen at any point? Sure. But until it does, it’s much more fun to be on the winning team’s side. Based on where we closed Friday, we’ve now effectively climbed 11% in the indices in 3 weeks, in a straight line — an anomaly of sorts, that is likely to see a rug pull at some point in time, but that could just as easily be at the 15% or the 18% mark. So embrace this rally while we still have it. I continue to rotate in and out of long names that are working, ready to adjust exposure when necessary. The levels here are clear. For a tight momentum stop, use 201.70 as your line in the sand. If you want to tolerate a bit more then use 200 as your level to get cautious.

$QQQ most of the rant for the $SPY applies here but what’s different for the $QQQ is the much tighter, cleaner consolidation that’s taking place above this latest gap up to new all time highs. $QQQ under-performed the $SPY this week, but it’s hard to argue this was a bad thing, as the pattern here still looks increasingly bullish and contained. The range here is very transparent, 101 to 102. Plan accordingly. 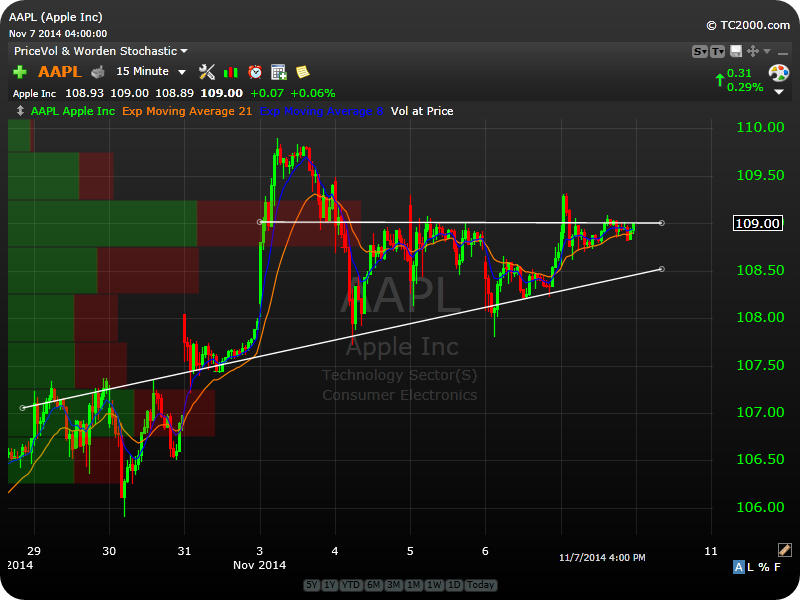 $AAPL saw some nice follow-through out of the gate on Monday of this week which was followed by some healthy consolidation as price found its footing trading in this ascending triangle with resistance at the 109 level. Apple has a had a very nice multi-month run and it still shows no signs of slowing in the near term. I like when strong stocks start to develop a high tight base continuation pattern and that’s what I will be looking for above 109 next week. Looks good. 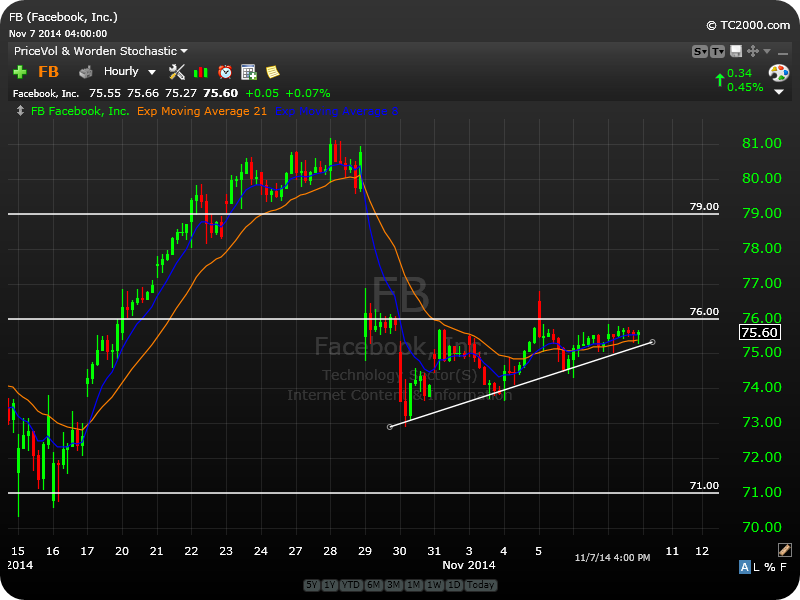 $FB finally since reporting earnings, Facebook is getting interesting from a breakout point of view. Facebook has tightened up nicely in this ascending triangle formation with clear resistance at the $76 level. It’s important to keep the positioning of this pattern in context, and by that I mean we are dead center in a larger multi-month range that stretches from $71 to $79 (or really the highs at 81). So it would seem likely whichever way this triangle breaks over next week would pave the way for a potential retest of the larger range at work.  Keep it on watch. 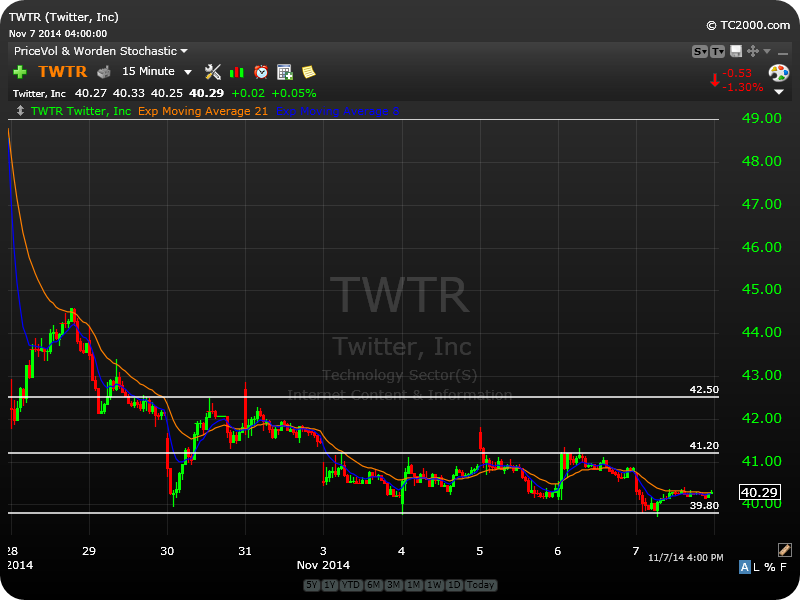 $TWTR still showing no signs of life, Twitter continues to crawl up into a ball and trade sideways after the large gap down following their earnings report. We are momentum breakout traders at The Trade Risk so I do like the tight price action that has been developing here to give us a trade setup in the near future, and at this point it really seems like it could go either way. The immediate risk range to have on watch is Friday’s lows at 39.70 to hold as support and 41.20 for an upside breakout. It’s stuck in an interesting place right here when looking at a longer term chart and it might just need another week of digesting before something directional happens. 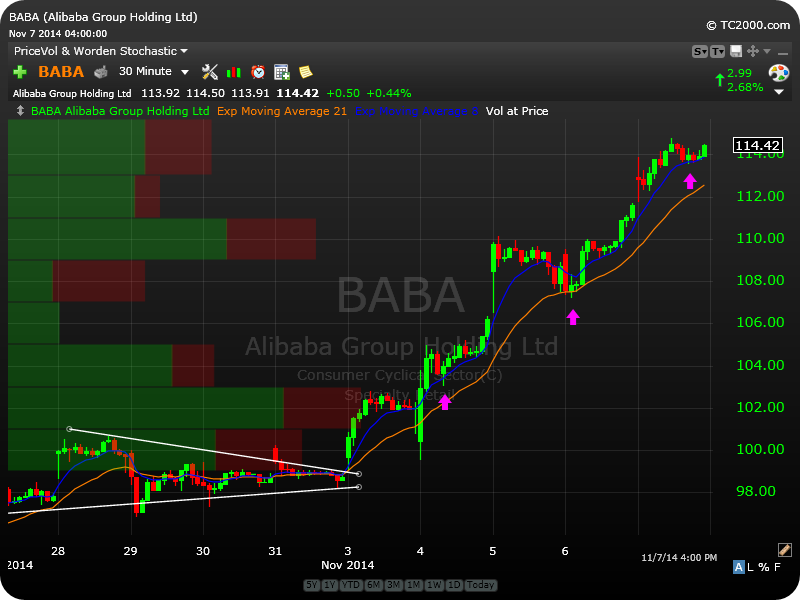 $BABA and the MVP award of the week clearly goes to Alibaba as this one has emerged as the momentum leader of the market. Earnings were out, the street clearly liked what they saw, as the price action tells the best story. There’s not a whole lot to say about this name besides that it looks great, it’s at all time highs (yes it’s a recent ipo), and I would not want to be trying to short this name. Any type of meaningful multi-day basing action would get me interested in jumping on board to the long side, otherwise it’s just a day trading vehicle until I can get a better risk to reward ratio. Looks good.