friday’s session was a day to take notice

$SPY we started the week off with on a very bearish tone as we gapped below Friday’s low and continued to trade down to SPY 188. For the rest of the week the market made an effort to stabilize sideways and managed to recover most of Monday’s drop by end of day Thursday. All of the action up to Thursday’s close seems par for the course for this type of environment, but it’s Friday’s session I think is worth writing about.

It was the first Friday of the month so that meant we were scheduled for monthly unemployment data before the market opened. For the month of the September the data came in weaker than expected, below analysts expectations, and the market reacted negatively to it as the SPY traded lower in pre-market trading.

The regular session opened up at the prior two day lows, and we saw price push lower extending losses to over -1.5% to the downside by mid morning.

So here’s what we had:

All of that data suggests the market is destined for lower prices. That is what we ‘expect‘ to happen. But instead, what happened Friday was the complete opposite. We saw the dip get bought, the gap closed, resistance taken out, and then a strong rally with a close on the highs. 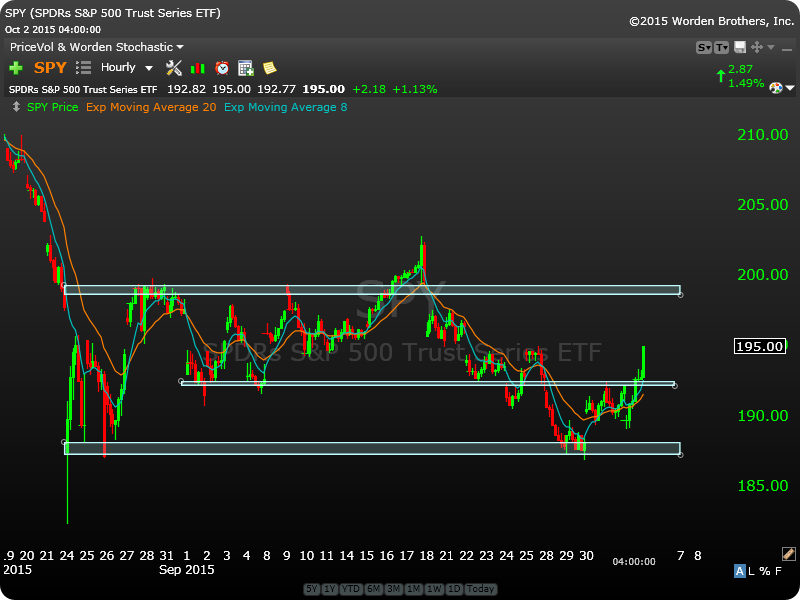 the 1.5% early morning sell off ended up turning into an impressive 1.5% gain despite all of the above bearish readings.

Most market days are just noise. Choppy price action that give us data points to analyze but nothing that really changes the technical landscape or any meaningful progress in price discovery. But every once in a while, the market does something unexpected that leads to a sharp, fast move. Friday’s action was one of these days.

It’s not my intention to overstate what happened Friday. I don’t think we’re just off to the races for the rest of the year and it’s an easy load up on longs. We are of course still in a very tricky market that demands you remain cautious and respect risk. We’re still rangebound, plain and simple.

But the bulls do have momentum on their side right now after making this stand. 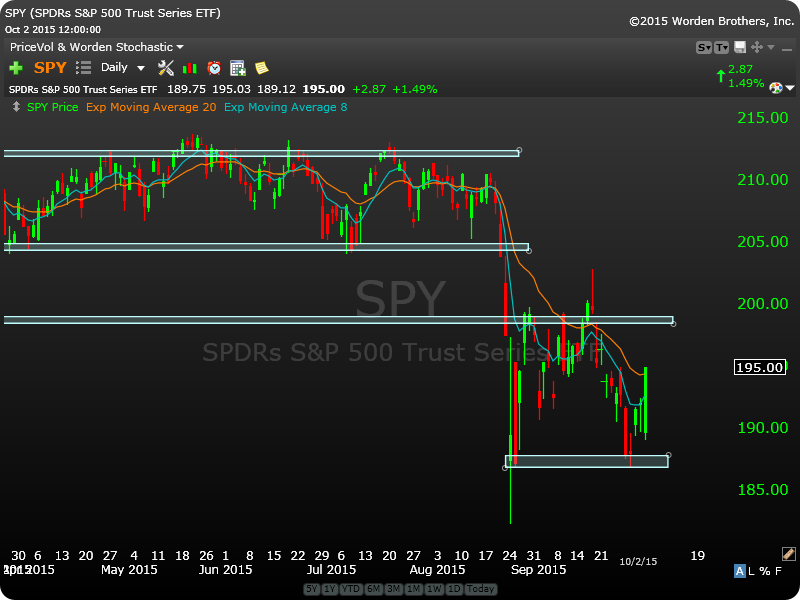 Our next major resistance level is at the top of this recent range around 199. Notice that even with Friday’s reversal we still barely managed to close above the 20 period EMA. Again, this shows that we remain in a very indecisive market.

The bottom line, if you were trying to short in the hole on Friday I believe the action throughout the day very clearly told you it was time to cover them up or at least reduce. 189.50 is now a very clear line in the sand for bulls to trade against.

I’ll have a video out later this weekend analyzing more markets so make sure you check back. And sign up for our free newsletter if you’re not already on it. It goes out on Sunday’s with more analysis, ideas, and market commentary.