gimmie that end of year reversal

$SPY what a turn around week! The bears were handed another layup this week to break the market down when bulls were on the ground and they just couldn’t get the job done. The bullish turnaround really stuck on Wednesday

of this week as the bulls managed to close out a 2% gain on the day and then follow it up with a 2.5% gain on Thursday to break all near term resistance and close just shy of all time highs. Friday the SPY ETF went ex-dividend so there is just over a 1 point skew to the downside that’s making Friday’s candle look a bit more bearish than it really should. If you were to take out the ex-dividend you would see we basically closed right under previous all time highs at 208. Heading into next week the short term range to have on watch is 204 to 208. Here’s some perspective from both sides of the fence to think about after this weeks rally. 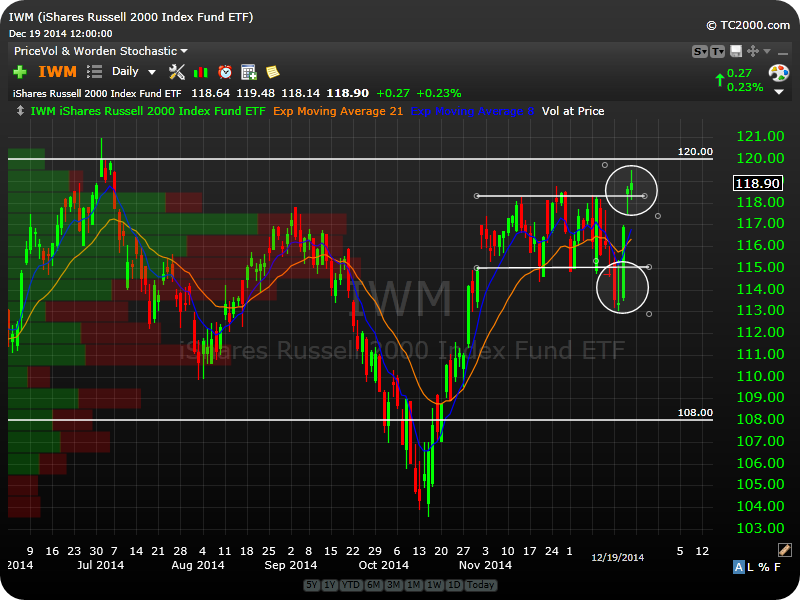 $IWM one of the most impressive moves this week was by the Russell 2000 which confirmed the false breakdown last week was a bear trap. Not only did we break back above prior support at 115, but we managed to sling shot through resistance and close above 118. In last weeks recap I was eyeing an IWM breakdown short (which I never put on), and now the bullish breakout scenario looks even better. This is one of the best signals the bulls have going for them into the new year, looks good so far.

$FB I wrote about Facebook last week and the notable outperformance it had while many other names were selling off during the market pull back. This week after an early two day shake, it came roaring back to clear last weeks highs and a significant area of resistance at 78.50. Facebook isn’t breaking out to new all time highs until 81, but clearing 78.50 to me is where the challenge would be given the amount of previous supply traded around that level. I took some long on the breakout and continue to hold it into next week. I like the potential here, so lets see if it can test and take those highs out over the next couple weeks.

$TSLA this was one of the more damaged charts early this past week which was trading like there was no support in sight. That was until Wednesday, when we had a very impressive engulfing bar that setup a powerful 3 day reversal closing at a long term level of significance. Tesla is one of these stocks that had a very impressive percentage move this week, but when you look at the bigger picture, is still stuck in an intermediate term downtrend. Heading into next week it will be important to see how it acts at this resistance level. The easy oversold bounce money was just made, now let’s see how bad the bulls want it. Good start, but nothing actionable enough for me yet. 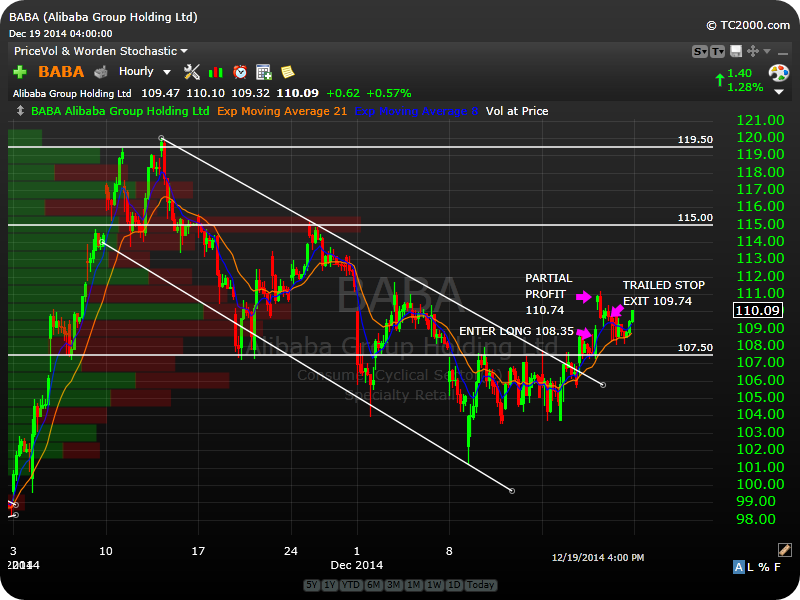 $BABA this was a breakout long setup candidate I wrote about last week if the bulls could get a rally above 107.50 resistance. They got the job done on Wednesday, I managed to jump on board, scale some profits on the gap up thursday morning but the fade lower throughout the day was not what I wanted to see, so I closed out the rest of my position under 110. Alibaba still looks constructive here so long as it can hold above the breakout level of 107.50. If you didn’t have a stop as tight as mine you could still very well be in this one. Looks good, let’s see if it can continue higher into year end.