$SPY after a volatile week of ping ponging around in this two point range, we closed near the highs thanks to Fridays nonstop bounce higher. In last weeks market recap I noted the importance of 199.50 and mentioned this was the line in the sand I needed to see the market hold in order to keep momentum going forward and to maintain it’s A+ status. So we have a pretty clear cut range to work with now and given Friday’s close it looks like we’re trying to make a break for the upside now. 201.58 are the official highs to have on watch for next week and support remains at 199.50. The market is short term range bound now from 199.50 to 201.50 within the context of an intermediate and long term uptrend. For the bulls, it’s party on while the market is trading up here, and for the bears, their fun may just be getting started if they can break us down below 199.50. All in all this looks healthy to me, position accordingly. 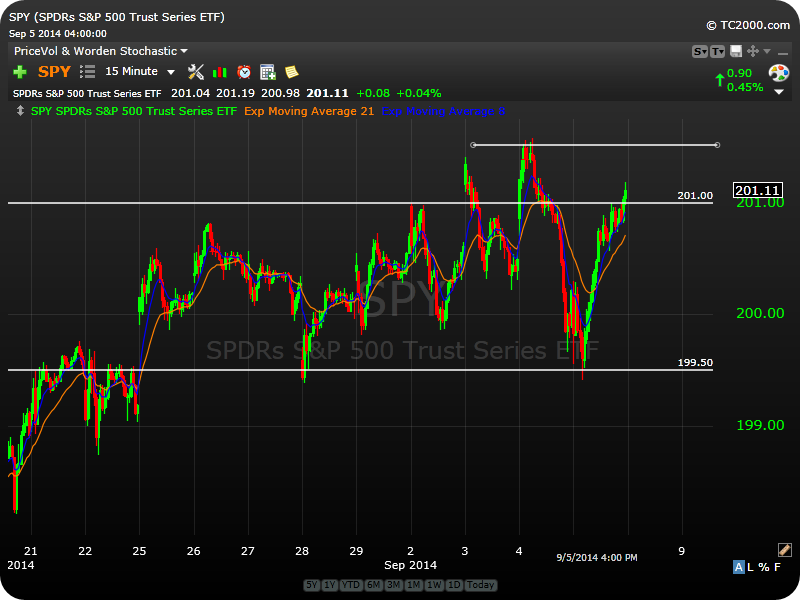 $AAPL the week started off as expected, grinding higher in this steady uptrend until out of the gate on Wednesday when we saw a gap and waterfall lower engulfing the previous 10 days of price action. It was a fast and powerful move which implies it caught a lot of people off guard. Perhaps there were many like myself that wrote Apple off as a grind higher candidate into the product announcement this coming Tuesday. But regardless of why it happened,we’ll want to watch how the market acts with this early basing action to see if we can catch our footing here. The announcement on Tuesday should provide a bump in volatility for Apple so be sure to keep that in mind if your taking a position either way this week. The bulls have to get this back above $100 to keep their uptrend in tact. Meanwhile the bears want to keep this consolidation as shallow as possible and quickly lose the $98 lows. Top of my watch-list for next weeks trading. 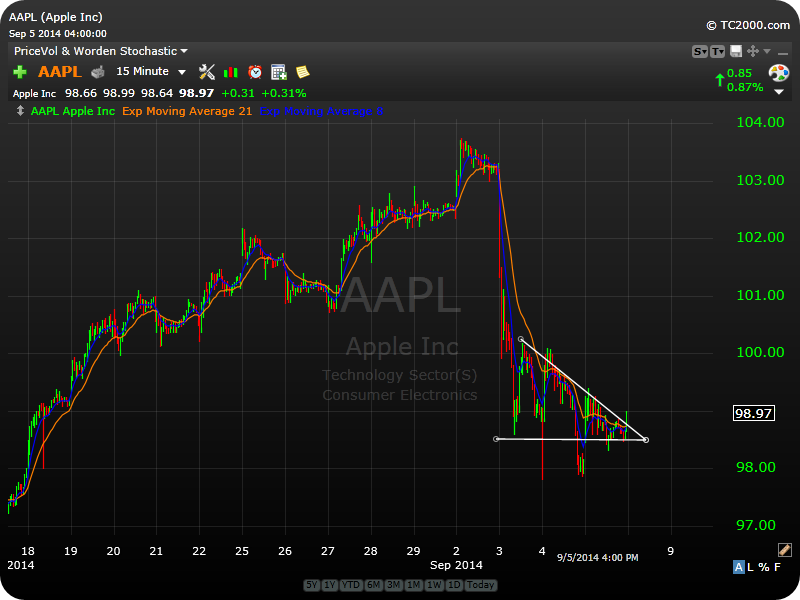 $GOOGL a very impressive bounce to the top of this month long range in Google after igniting from the 580 lows. I talked about Google being one of my favorite short candidates if it could continue to work lower below 570 but that setup clearly didn’t present itself this week. The bulls proved their support in this name so far and now they’ll need to bid us up above 600 to break some intermediate relative highs. It could turn into an interesting long if we can get some closes higher than here, keep it on watch. 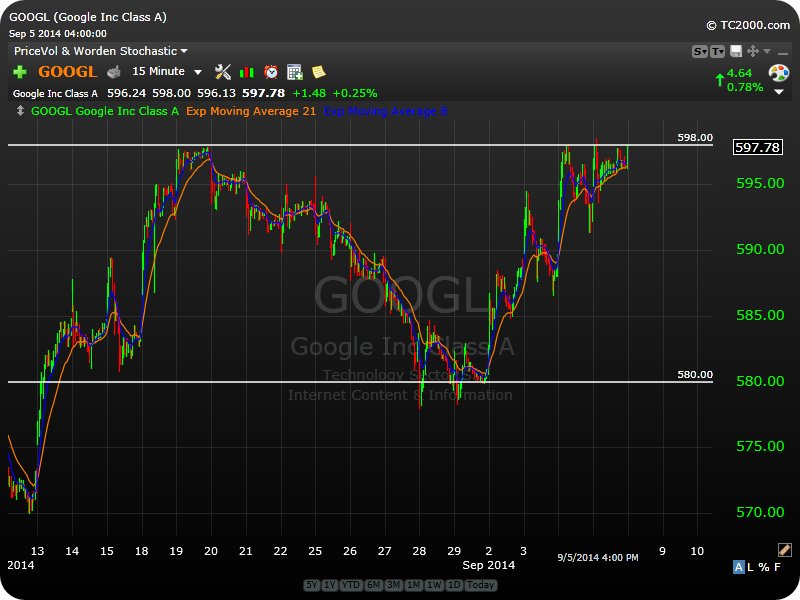 $FB similar to the market, Facebook did a lot of shaking around this past week in a high and tight range. Levels are clearly defined now 75.60 – 77 and Friday’s action gave us a close above this recent range and new all time closing highs. Look for continued trending action higher later this month so long as Facebook can hold onto this support. I like the way Facebook is acting here, on watch next week. 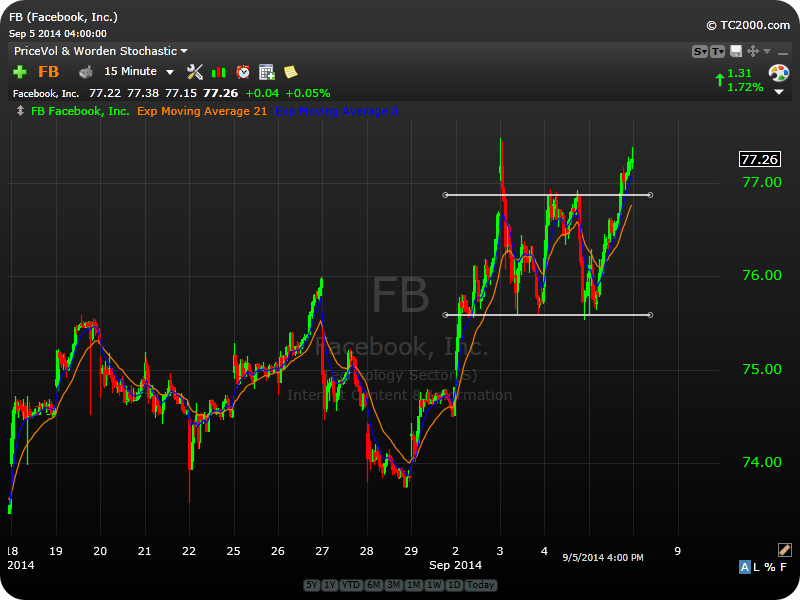 $TWTR very similar bullish look in here Twitter after spending this week consolidating in this clean range. Twitter has had a great 6 point run after breaking out from $45 and a little digestion is welcomed before resuming it’s uptrend. $51 more or less would be the trigger for me to get back involved in this name for further trending action. Might need a little more time to fuel up in this range, regardless 49.50 – 51 is the range to keep on watch. 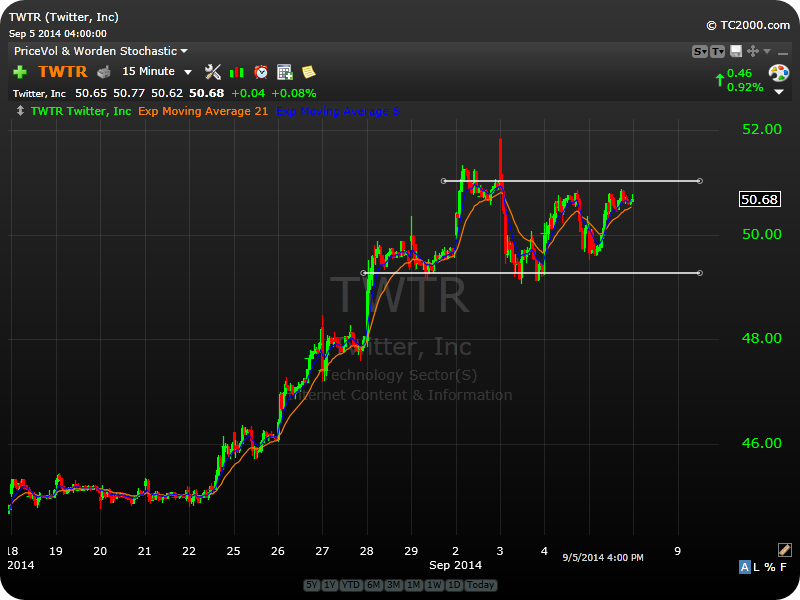