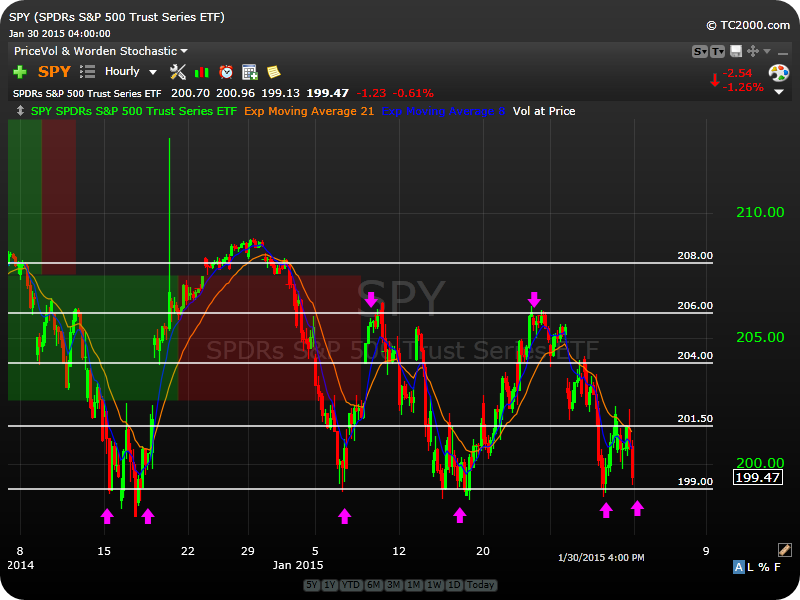 $SPY in last weeks recap we pointed out how the indices and majority of leading stocks had put in a nice short term rally but were showing signs of stalling at previous inflection points all around. We were on watch to see if the bears could break us back down on the data and earnings heavy week, and thats exactly what we got. We had a mixed bag of earnings which seemed like every company that had a beat and rally came with another name that disappointed and sold off. The concern now is that the bears aren’t done hammering this market, and major support at 199 could be taken out. It’s held for several months, acting as a springboard each time it was tested, but as we know, the more times a level is tested, the more likely it is to give way on a subsequent test. This is a very important level, and one I would likely play for a breakdown trade if we were to get that washout next week. Because this level is so widely watched and clear cut, there’s likely an elevated amount of trickery around these levels, so be sure to manage risk appropriately. Bottom line, this market remains stubbornly uncertain and should be eyed with an open mind. I am 100% cash into the weekend. 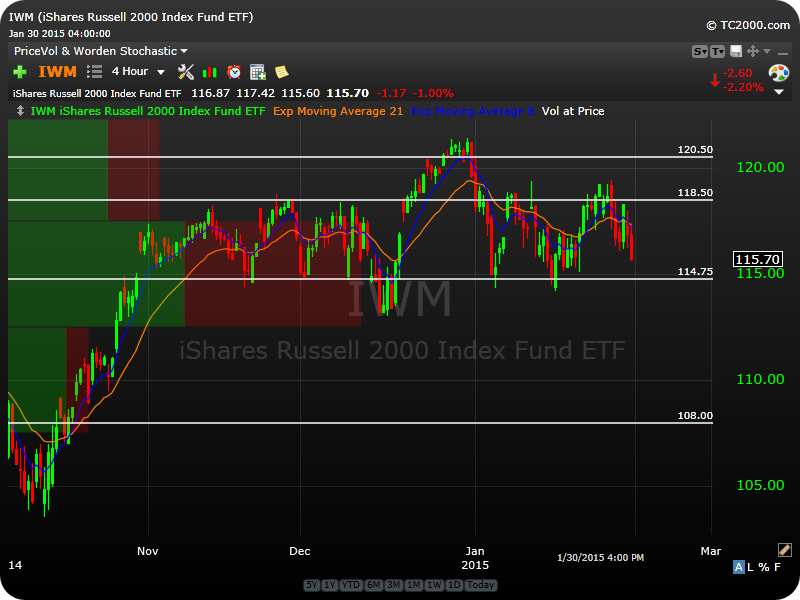 $IWM we still have the same picture here we’ve had all year, intermediate support at 114.75 and resistance at 118.50. We continue to ping-pong from the bottom to the top of the range and it looks like if we see some follow through next week we’ll have yet another test of support. Similar comments apply here that were written about the $SPY, so lets keep this widely watched level on our radar next week. 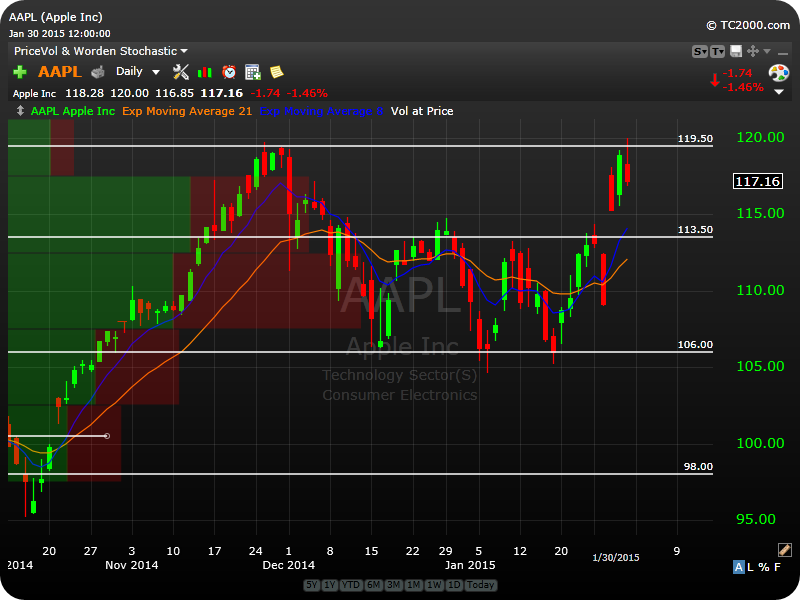 $AAPL reported some blowout numbers this quarter and the market responded favorably. It gapped up above 113.50 resistance on Wednesday and managed to hold up for the rest of the week despite the broad market weakness. We managed to get a couple points out of this after initiating a long on Thursday around 117 and sold at 119 after failing to stay positive on Friday. Big picture, Apple still looks good as long as it can hold in above prior support, but the fade and close on the lows was enough of a signal to me that upper level momentum was gone. Perhaps if it can go sideways here for a week or so it can make a run on these all time highs and give us another long signal. On watch. 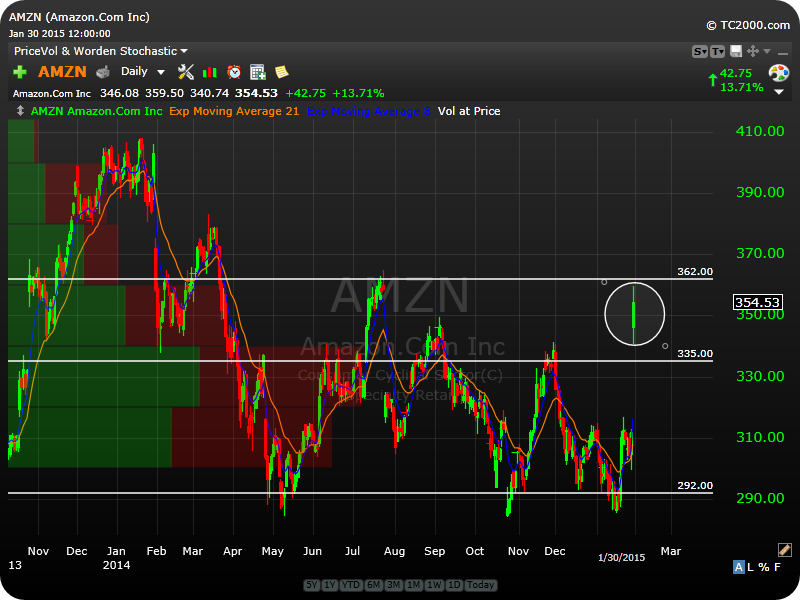 $AMZN very favorable response to their earnings report, as Amazon opened up above long term resistance at 335 and ran right into 362 resistance which hasn’t been tested since last July 2014. This name looks to finally be in play on the long side again, and I’ll be watching this over the next couple weeks to see if we can get a setup above 360 after digesting this gap. Nothing too interesting for me yet, but lets see how the bulls maintain themselves up here. 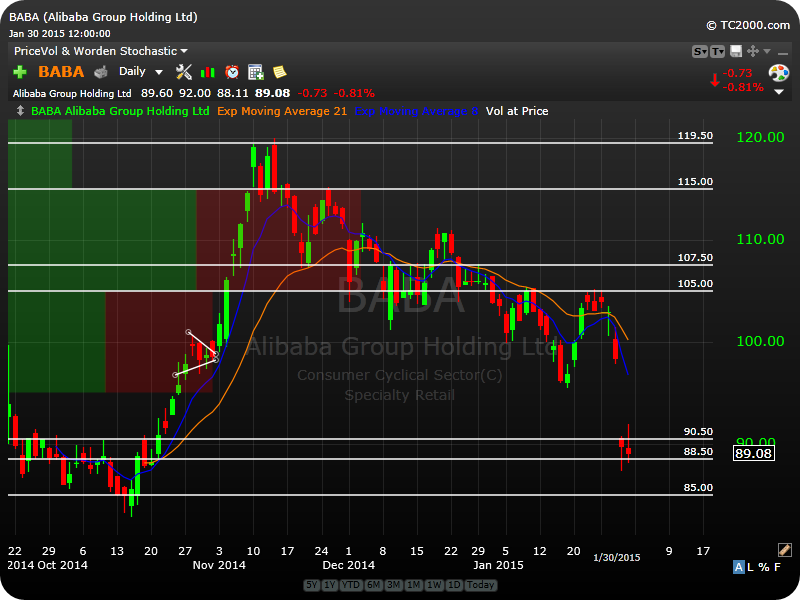 $BABA back to the lows for Alibaba after reporting earnings this week. 85 to 90 was the immediate post IPO range Alibaba carved out for a couple of months and we’ll see if buyers are interested around here once again. Not very actionable for me right here, I’ll need to see more trading to develop around these levels before getting any new signals. Give it some time, on watch.