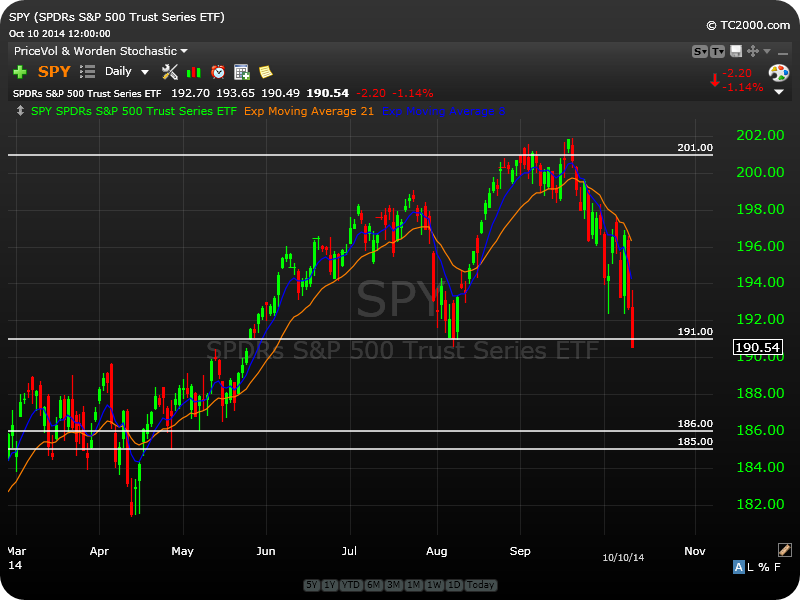 $SPY what a week! We haven’t seen volatility like this in a long time, especially with such broad participation like in this week’s sell off. Because of the magnitude of moves this week I’ll be reviewing all daily time framed charts in this post. So here we have the $SPY and this is essentially the same chart I had posted last week, the only exception being the added band of support levels down near 185. Last Sunday I noted the downtrend we were in and suggested to remain cautious on the market until we could see it prove itself by taking out 197 resistance. Ultimately we failed at that resistance and broke to the downside, closing on the lows and right into 190.50 – 191 support. This is  a critical line in the sand for bulls to hold onto for two reasons. First, this is a major swing point dating back to August, and if we manage to take it out, we will start the process of down trending (lower lows & lower highs) on intermediate and long term time frames. Second, is the volume null right below this area of support and distance to the next level of support. Below 191 there really isn’t much in the way in terms of previous supply until the 185-186 range. So the bears have momentum, fear, and the potential changing of intermediate term trend on their hands. The Bulls have an already oversold market slamming down into previous support within the context of a bull market, where all 5%+ dips like this have proved to be the best buying opportunity in the past two years. So there you have it, a market that’s heating up and offering a lot for both bulls and bears, and one that’s running right into the prime of earnings season in the coming two weeks. Less is usually worth more in these types of environments, so best of luck trading, and make sure you check the earnings dates on any holdings. 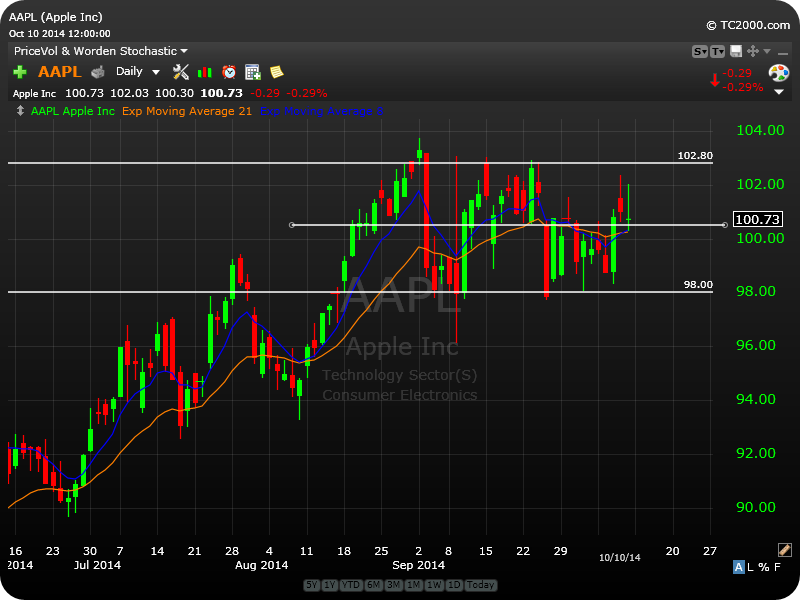 $AAPL if you were just living in Apple land this week, things didn’t look so bad. Apple appears to be one of the safehavens for money to flow during this market pullback and we can see there has been no technical damage to speak of. In fact, it actually closed green on the week and managed to barely hold above this point of control (midpoint) line within this larger 98-103 range. It’s certainly a stock of interest on the long side, especially if the market can catch its footing and stop the downside pressure. Earnings will be coming up later this month, and the next momentum level of interest comes in above 103 where it would begin making new all time highs. Unfortunately earnings might keep this contained until after they report, at any rate its a wait and see. 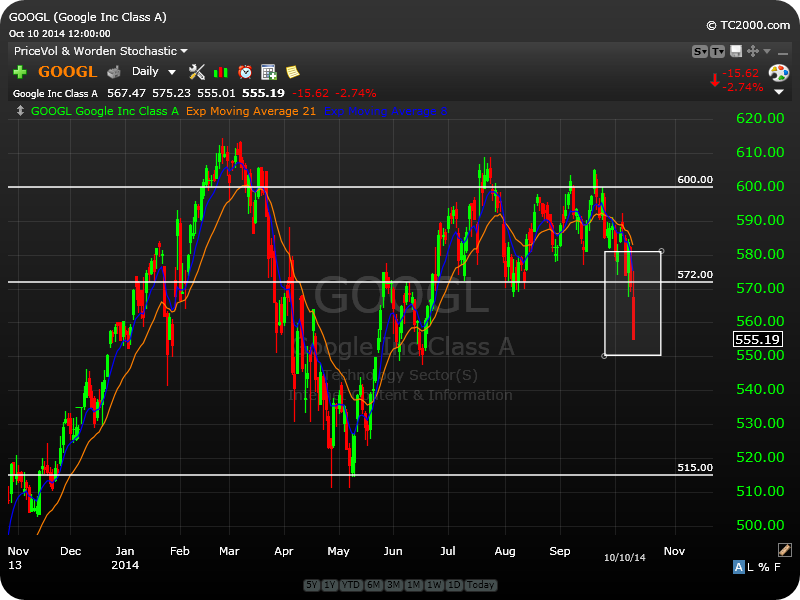 $GOOGL felt the selling pressure this week as it snapped below some key support at 570 and is in the process of making new 3 month lows. This roll over here could get ugly for the Google bulls as the next major level of support doesn’t come into play until down around 515. A double negative (which doesn’t cancel out for a positive) is the fact that Google spent three months trying to base out for a move to new highs but never succeeded. This is giving the look of a potential lower double top high with a good amount of supply trapped above if this breakdown continues. I really like the weekly breakdown in Google for a play on the short side during this market ‘correction’ but again we have earnings coming up which could derail the current technical picture. 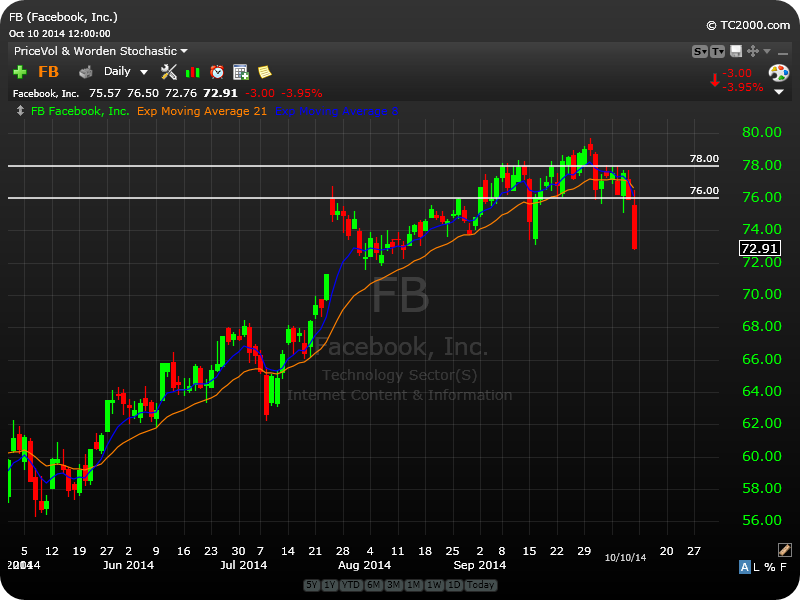 $FB what was once grinding out new highs day in and day out at a very slow pace is now in the middle of a pretty nasty breakdown from $76 horizontal support and this previous rising trendline of support. Facebook looks very vulnerable to further corrective action as there aren’t really any major pivot lows of price structure to catch price from falling further. $72 seems like a minor level to watch, otherwise we will have to wait for the bulls to step up and stop the bleeding. I have no interest in buying Facebook for any technical reasons, rather I would favor being on the short side.

$TWTR an impressive 8.84% smack on Friday to end the week with a bang after twitter showed extremely positive relative strength for most of the week prior to Friday. I actually stepped in and bought a small 1/2 sized position on the close at 50.42 as a bit of a feeler going into next week. Not my typical momentum strategy, but I couldn’t help myself after seeing such an outsized move, on no news? Or nothing I was aware of (not that it really matters to me one way or other). Now you might think, it’s contradictory to be bearish facebook after only a 4% down move and then buy twitter after an even bigger down move. The difference is the structure of support twitter still has below it around this 49 level. Despite a 9% move on Friday the actual structure of recent price action didn’t really change. It’s still in an uptrend (granted upper level momentum surely snapped off) and we just went from the top of the range to the bottom end really quickly. If Twitter starts to lose $49 it could start putting in a larger retracement so we’ll want be mindful of that level. Otherwise it needs to reclaim $53 to regain upside momentum status.