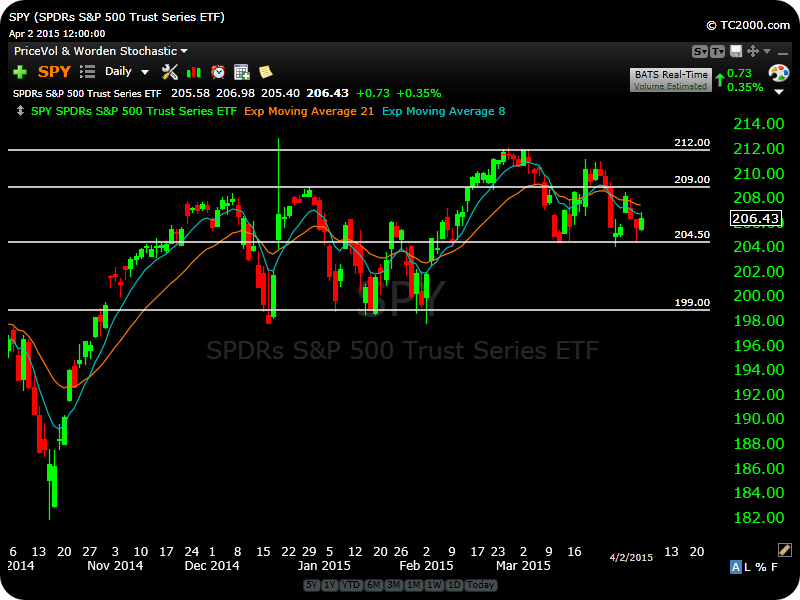 $SPY in last week’s recap the bulls were pinned down against support near 204.50 and we were interested to see if they could defend those lows for a second time in one month. We came roaring out of the gate with a gap up to start the week but we were unable to get any continuation off that strength for the rest of the week. Tuesday and Wednesday we reversed lower, briefly retested 204.50, and then finished the holiday shortened week on Thursday with a moderate bounce.All in all, we moved around quite a bit, but ultimately closed near where we started, changing nothing about the technical landscape. The jobs report released Friday morning came in much lower than expected and we saw a knee jerk 1% move lower in the futures before they closed for the holiday. There’s still plenty of time until the open on Monday, but we could be in store for yet another re-test of 204.50 early next week. As far as my portfolio goes, I am completely flat into the weekend. I’m still not seeing any edge in this market environment one way or the other and I’d much rather sit on my hands than flip a coin and guess. Bottom line, there’s so many conflicting signals in this range that I want to see the market tip its hand before I put on any new risk. Given the action this week and the initial reaction to the jobs number Friday morning, it seems like bears might get a head start on Monday. Enjoy the holiday! 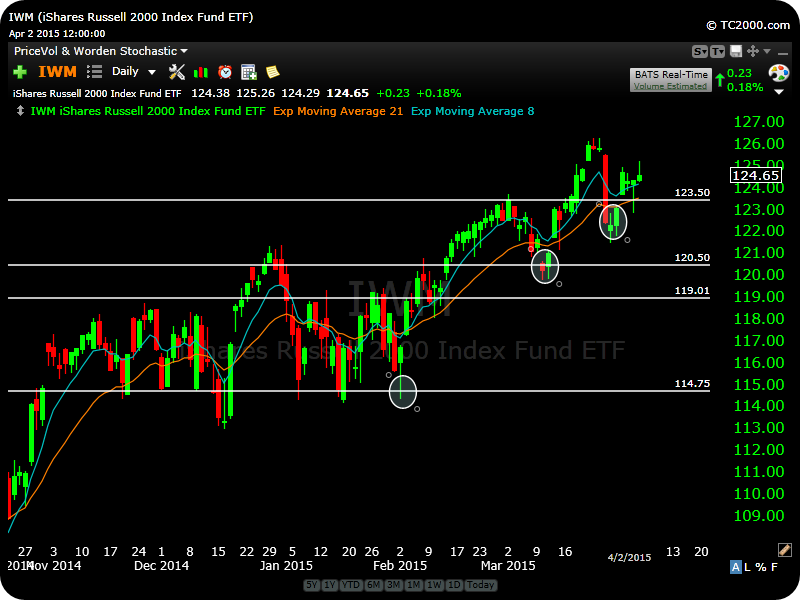 $IWM speaking of conflicting signals, here’s one of the bullish ones. The small cap index closed up over 1% this week and continues to hang tough in this uptrend. With very minimal technical damage suffered and just a stone’s throw away from all time highs, the Russell continues to demand your attention if you’re trying to be bullish in this environment. However given where it closed Friday it’s sitting in no-man’s land between the recent lows at 122 and the all time highs at 126 so if you’re not involved, I think it still pays to stay patient and wait for a better spot. Bottom line, this is one hell of a resilient index. 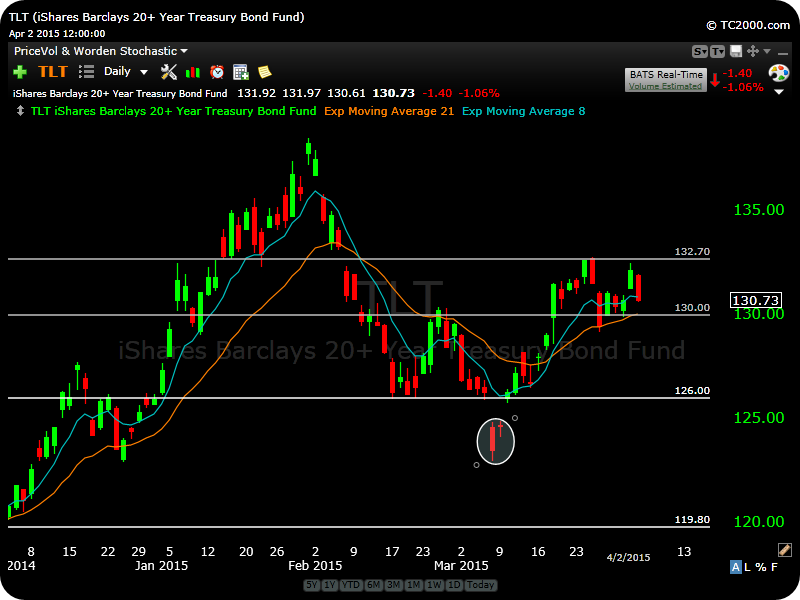 $TLT another choppy market that ended up closing just slightly red this week thanks to Thursday’s poor performance. $TLT has been in an uptrend ever since the island bottom reversal to kick off the month of March but more recently it looks like it’s getting ready to chop around a bit. It’s showing some early signs of stalling above 132 and it might need some more time around this 130-133 range before making a new leg higher or lower. Keep it on watch, could be a move setting up over the next week or two. 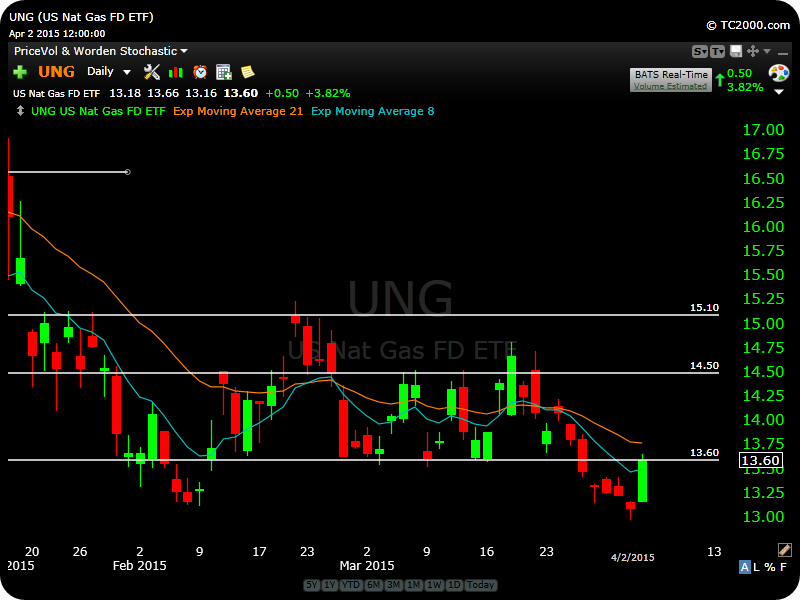 $UNG a name I was short coming into the week until I booked profits on Wednesday’s session. Luckily for me, Wednesday proved to be the optimal time to exit the position as we saw a strong upside reversal on Thursday and closed right up against the previous break down level at 13.60. While the bulls are certainly not out of the woods yet, the fact they undercut the previous lows in February and rallied strongly following that, is a good start. For me, it’s a time to step aside while it plays around back in this intermediate range. Needs some time now. 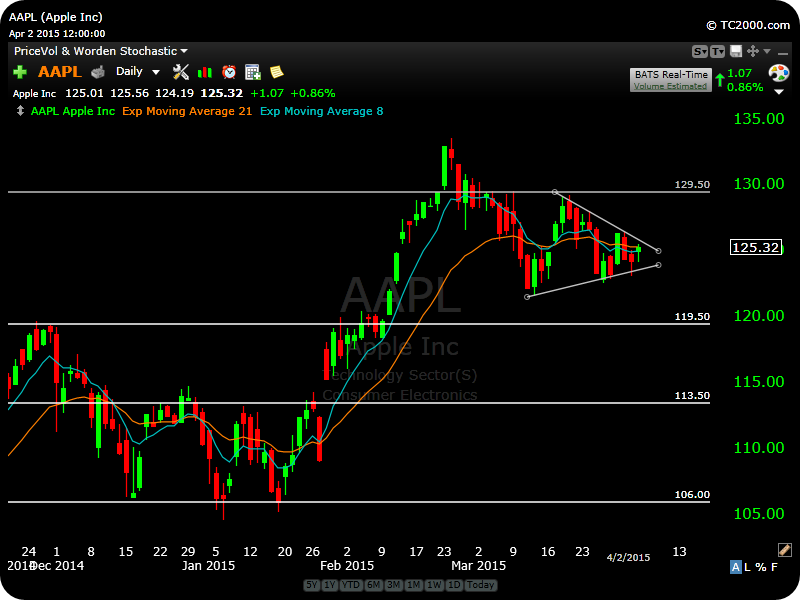 $AAPL is starting to peak my interest as price tightens up around this 125 area. This has been comfortably moving sideways now for the month of March in the midst of a long term uptrend. I’m waiting to see if this action will prove to be a continuation pattern that will resolve in the direction of the trend, or if there is further corrective action needed before any sustainable attempts higher. In either case, I’m beginning to eye Apple for a breakout/down. 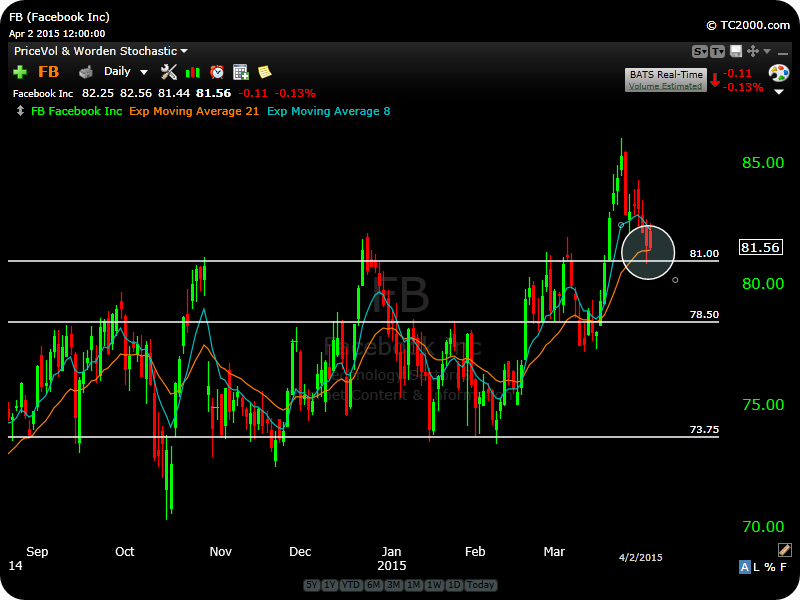 $FB continues to pullback towards the previous breakout level at 81 after its explosive leg higher at the end of March. We’re nearing a 50% retrace of that last leg higher, and for the bulls to maintain the urgency in this uptrend, you would want to see them successfully hold the lows from this week going forward. Not actionable for my style, but for those who like to trade pullback buys, you’ll want to have this one on watch.