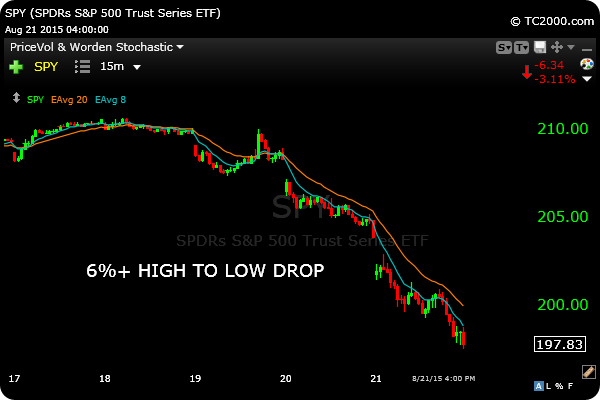 (5 day chart of this weeks action)

$SPY we kicked off the week with sweet bullish melodies and traders like myself were lured into the waters buying stocks with promises of higher prices. But it wasn’t long before the music stopped and we realized we were part of bear infested waters and a party that was just about to get started.

Tuesday and Wednesday gave us some subtle warning signs that Monday’s acceleration higher wasn’t all that it was cracked up to be and once Thursday hit we knew something was wrong. Fridays session went on to really seal the deal with an even quicker acceleration to the downside.

Here’s how some of our favorite names performed on the week:

Those are some big single week moves in some big names. It takes some serious volume to move such a collection of names that far. And there’s plenty more individual stock examples out there in different sectors that got hit just as hard or worse.

Okay now let’s take a closer look and analyze where we are in the $SPY after this week’s brutality.

After snapping that critical 205 area that held as support since March of this year it was a complete meltdown and overshoot to the yearly lows back at 198.50 from January & February of this year. Again, a 6% move in the $SPY in a single week while overshooting a very critical support area.

Now let’s look at some of the internals.

We’re looking at two studies here, the top pane is the CBOE put to call ratio and the bottom pane is the McClellan Oscillator. You can see the put/call ratio has spiked to levels that has exceeded even the worst of the October 2014 9.5% correction which is the last meaningful correction we’ve had in markets going back a few years.

The McClellan Oscillator below is also at extreme levels but still not as stretched as we were back in December of 2014 and October of 2014.

There’s countless other indicators I could show you that point to the extreme relative oversold levels based on Friday’s close, but honestly, just look at the original chart of price action above and you can visually see how stretched we are from traditional moving averages and how rarely this magnitude move happens by looking back in time.

Okay finally let’s objectively look where we are.

No one knows what’s going to happen next week or in the next two weeks. All we can do is analyze what the market has done and adjust accordingly. While we did suffer losses this week at the Trade Risk I am very pleased with our ability to mitigate the pain losing just -0.37% this week versus the SPY at nearly -6%.

Heading into the weekend we put on our first uncharacteristic trade of the year as we bought a position in SSO at the close of the day to play for a snap back. We’ve very consistently only played breakouts this year, but we were inclined to try and take advantage of at least a temporary snap back. Otherwise we have no positions on in the portfolio which I believe is a first for us this year.