$SPY a weekly chart shows nicely how this past trading week played out. A significant thrust off of the highs showed us a very clear change of market character as we broke below the past 4 week lows. All of my market recaps during the past couple months included a statement along the lines of, “I’ll continue to be bullish until I’m given a reason not to”, and now finally, I’ve gotten my reason not to be so bullish.

This week also proved to be a good stress test on the ol’ trading process. Were you caught lulled into a false sense of complacency after the recent grinding uptrend? Or were you able to reactive quick enough to honor stop losses and move aside, or even get short? Whichever camp you fall into, it’s important to go back over this weeks action and your trades to see how you handled this transition week.

So with respect to the action going forward, we are in the midst of a pullback within the context of an uptrend. Depending on your timeframe, this will mean different things to you. For me, it means opportunity for momentum opens up to both sides of the market. For the past few weeks I’ve basically been in long-only mode. But now I’m looking for actionable shorts for fresh breakdown plays along with longs that have held up well and are breaking through resistance.

The bottom line, is that damage was done this week that we haven’t seen in a while, and it’s a time to take notice. Individual names should still be looked at on a case by case basis but the $SPY remains in a near term downtrend with momentum pointing lower. Until we see price begin to stabilize and take out resistance it’s going to be tricky times as we go through some volatile tug of war. Best of luck out there, stay nimble. 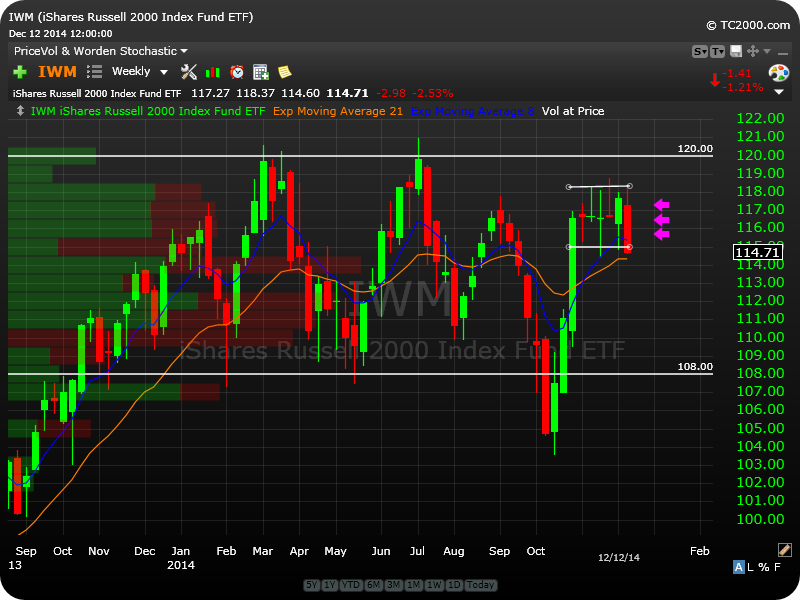 $IWM I usually include analysis on the QQQ in my weekly recaps but it’s so similar to the $SPY I think it’s worth pointing out the action in the small cap index. The past 7 weeks we’ve traded in this tight 3 point range from 115 to 118 and you can see based on how we closed this week we’re getting real close to breaking down from it. My trading style revolves around momentum breakouts and breakdowns and although I didn’t establish a short position in the $IWM on Friday, I may very well get involved if I see further follow through next week (assuming we don’t gap down big). Whether or not your interested in taking a trade in the index, it’s worth keeping on your radar next week to gauge the overall health of the market as the bulls fight to hold onto some critical support. 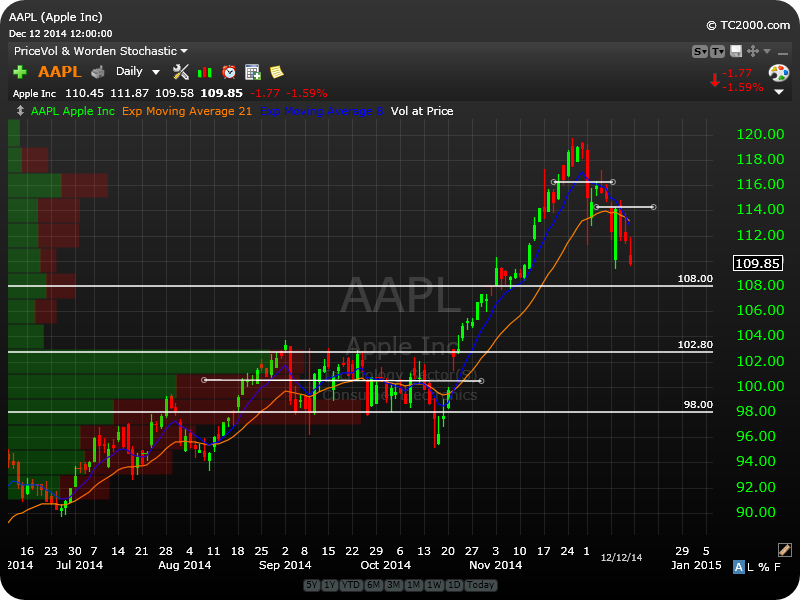 $AAPL continued to pullback like much of the market this week in relatively orderly fashion. When you take a step back and look at the big picture you can see the latest leg higher in Apple began at $95 and stretched all the way to $120. We now find ourselves just $10 off of the high during two weeks of pulling back, which I view as constructive action for the big picture. Because of this bullish long term trend, I would be an interested buyer if it starts to move sideways and set up a retracement back to the highs. Not too actionable right here for me, so I’ll just sit and watch. 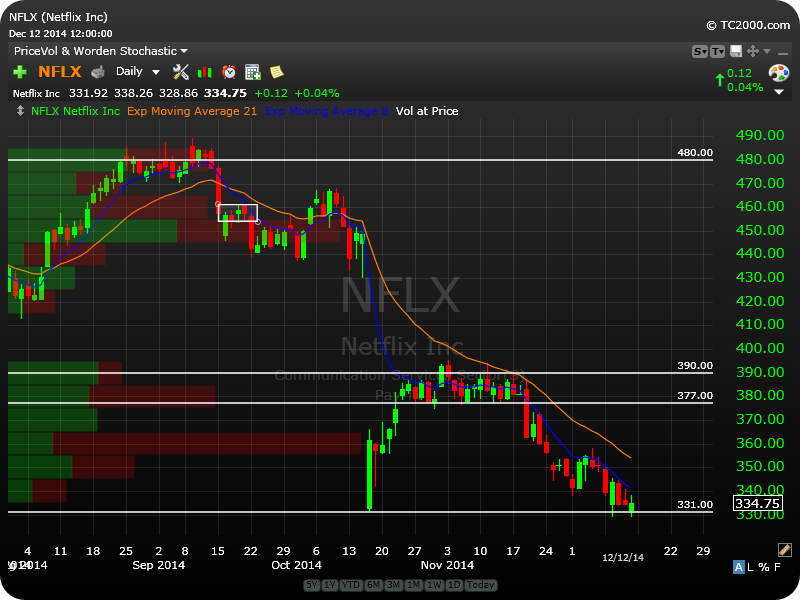 $NFLX down nearly 5% on the week, finds itself right back to the post earning lows from October. Friday the bulls managed to reverse for a third time off of the important 330 support level to hold a critical line of defense. Keep an eye on this level going into next week, a pierce and hold below there could bring in a pretty fast and significant round of selling if the bears manage to crack it. On watch. 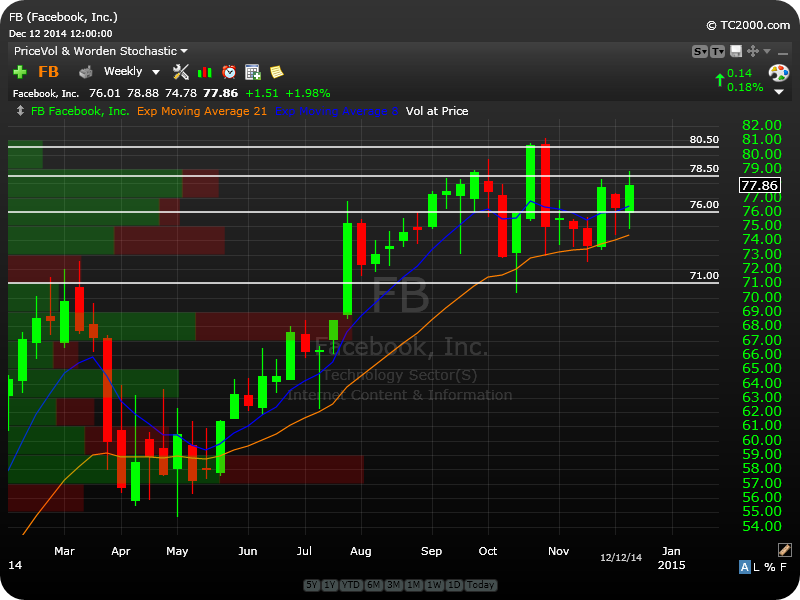 $FB weekly chart of Facebook this time around and it’s to showcase that this one managed to eek out a 2% gain on the week while most others in this space were down at least 2% during this time. This type of out-performance raises flags in my head, especially since it has been so quiet over the past few months. It still has some work to do, but if Facebook can break through this past weeks highs over 78.50 it could set up a nice squeeze to the previous all time highs. You’ll want to keep this on watch. 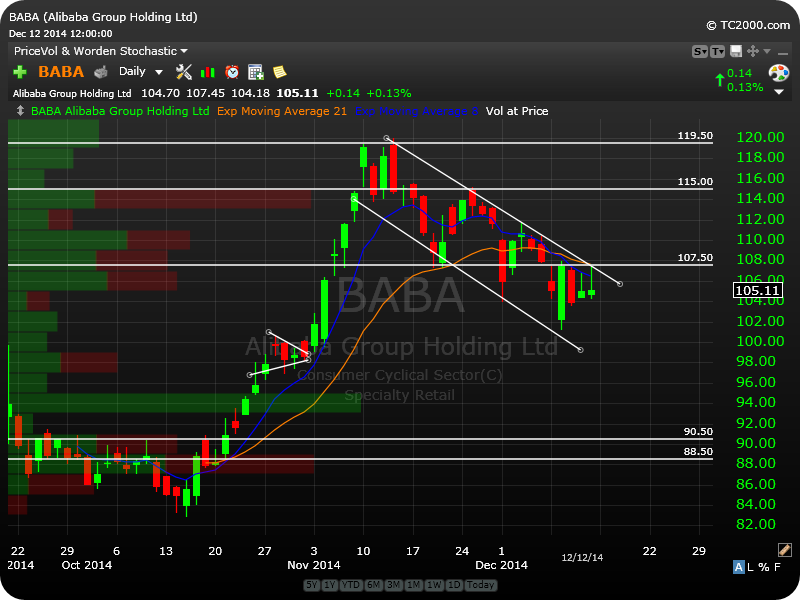 $BABA here’s another one that’s in the middle of an orderly pullback within the context of a longer term uptrend. Alibaba had a brilliant run from $80 all the way to $120 and it just barely retraced 50% of that move based on the lows from this past week. That bullish engulfing bar on Tuesday continues to be potent enough to stall the bearish momentum in the short term. We’ve had 3 sideways inside days based on Tuesday’s candle and it’s showing signs of trying to stabilize around here. The double topping tails at 107.50, with a cluster of moving averages, and recent downtrend line, combine to give that zone some actionable significance. On the downside you should keep the week’s lows at 102 on watch if this is going to start to firm up here. Getting interesting, but not quite ready for me, on watch.