market unrest despite pockets of strength

$SPY so last week I laid out three scenarios going forward for the indices after the initial breakdown. Here we are 1 week later and the only scenario we can write off at this point as not possible to play out is the 1-2 day shake. So lets recap what we got:

If this is a true breakdown and intermediate trend reversal then the selling is not over, there’s more overhead supply to be offered out in the coming week and 175-176 can easily be the first rest stop.

If this is a start to new market character of high magnitude thrusts followed by slow grinding basing action, perhaps we stabilize around these levels early next week, move sideways for 7 – 10 days before pushing back towards all time highs once the bulk of earnings season subsides.

The market caught its footing this week as bulls and bears wrestled it out throughout this 177 – 179.50 range in sessions of elevated volatility and increased volume. It’s positive that the bulls have at least paused the steep downtrend of lower prices however any bullish reversal attempts have been met with stiff resistance despite some key individual stocks moving higher off earnings reports. It seems like I am stating the obvious at this point but there seems to be a growing number of individual names diverging both on the down and upside from the major indices. Looking ahead to next week we should remain conscious of this new range in the indices and make it a point not to get whipsawed between the lows and highs of this past week while the market churns up both bulls and bears alike. Fight for your prices, remain cautious of the headfakes, and be weary of chasing breakouts and breakdowns, this is not the optimal environment to be aggressively chasing. I came into this week light long in my swing account and I closed out Friday stopped out of all but one of my positions. I will focus my attention on intraday setups, and despite the volatility and beating some stocks took, my day trading account managed to eek out some small profits. Want a way to generate additional day to day cash flow or idea generation? check out my performance, and then my day trading alert service. 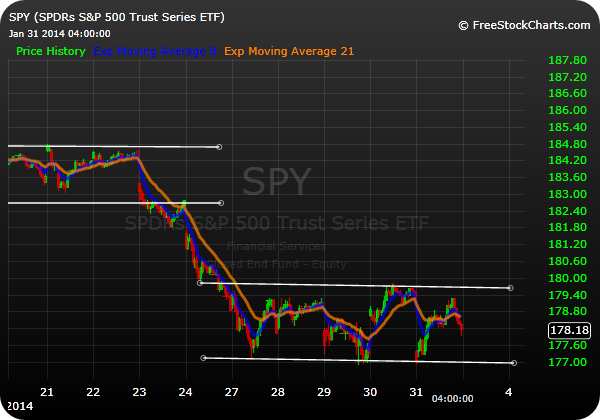 $AAPL sold off hard off their earnings report breaking below the immediate support of 545 and the larger intermediate support of 530 only to settle down at the convenient round number of 500 by Fridays close. Short term we can see price trading in this falling channel with near term resistance at the 503-505 level followed by the entrance to the ER gap around 513. Tough to make any calls in this name on a swing timeframe until more action develops, so until then I’ll stick to day trading. In my mind Apple is now bearish until proven otherwise. 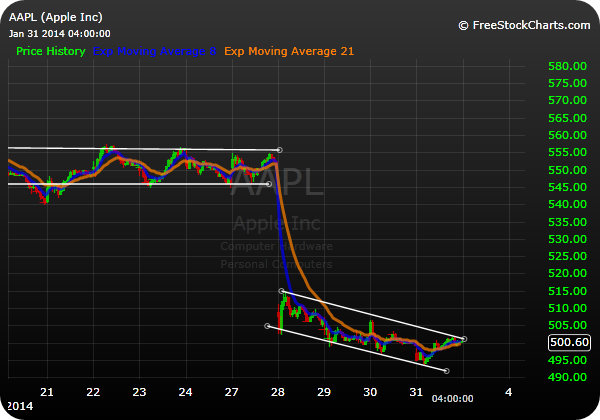 $GOOG pushing new all time highs after their earnings report on Thursday Google continues its accelerated uptrend ever since that major gap up back in October 2013 earnings. Looks great for higher prices, as the saying goes, the trend is your friend. We should find the 1168ish previous all time highs offer support on the downside and we aren’t that extended to the upside which has me believing this may have plenty more gas left in the tank to run. One of my favorite long setups if the market can hang in there next week. 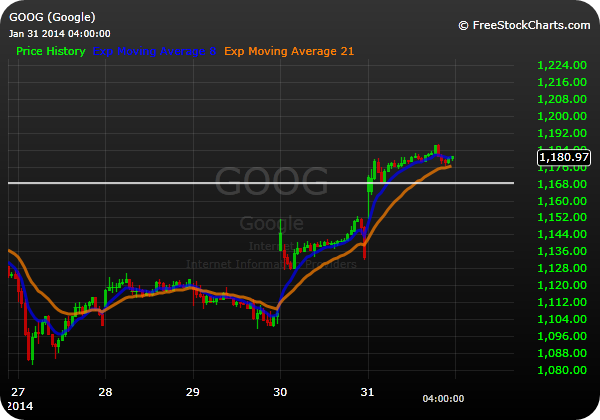 $NFLX another tech leader at all time highs is Netflix which continued its ascent within this rising channel despite the broader markets calamity. Risk to reward here seems favorable on the long side using a close below 395-400 as a stop to exit the trade. Not much else to add, looks great, stick with it if your long and as it seems safe to say Netflix has regained its leader status. 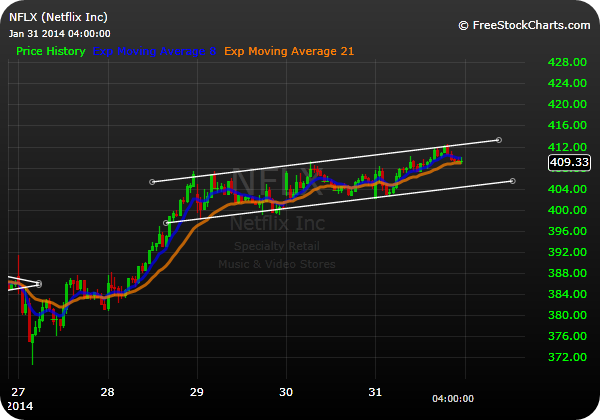 $FB a favorable earnings report was the catalyst ripping Facebook to new all time highs on Thursday leaving behind the old highs at $58 in the dust. Facebook maintains its leader status and continues to be a stock in demand by the street. Watch for momentum continuation above Fridays highs, near term support around $62 and then the gap entrance around $60. Out of the three recent bull breakouts for the tech titans I like Google > Netflix > Facebook in that order for continuation. 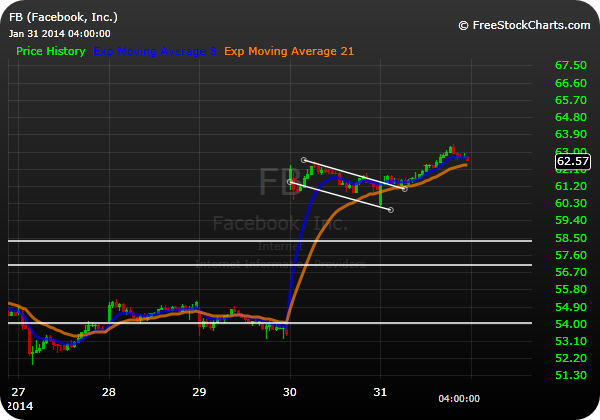 $AMZN finally lost the love of the street on this earnings report when Amazon broke down from what had been a near 2 month base near all time highs. Amazon closed on it’s lows Friday and I suspect theres more downside to follow as that 2 months of overhead supply gets offered out to the market. I’ll be day trading this to the short side if the trend continues lower next week and I would avoid this as a swing trade candidate until more price action develops. 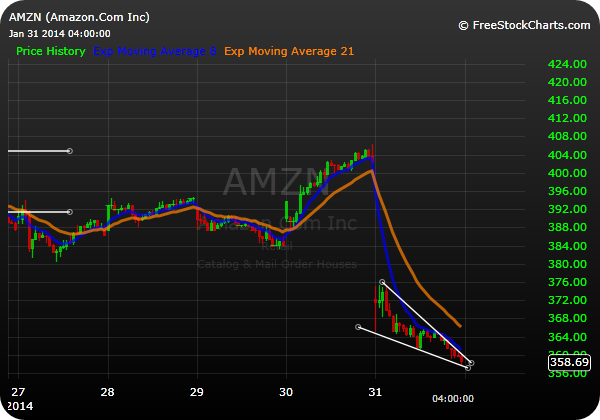 $TSLA shrugging off the market weakness and hanging tough in this intermediate uptrend forming a high level base above 180. I like the name ever since that large bullish reversal on 1/14 and I think the tide has shifted in favor of the bulls until proven otherwise. Keep watch for this grind higher to continue. 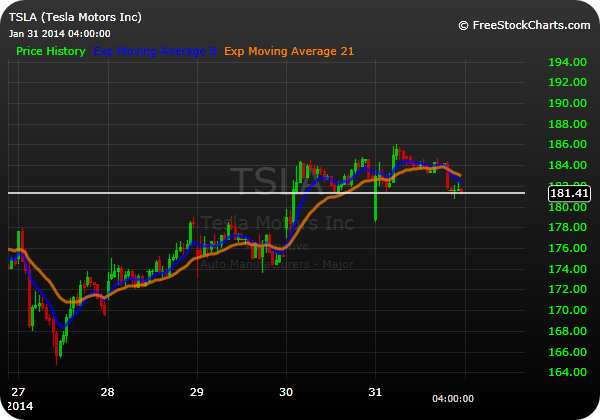