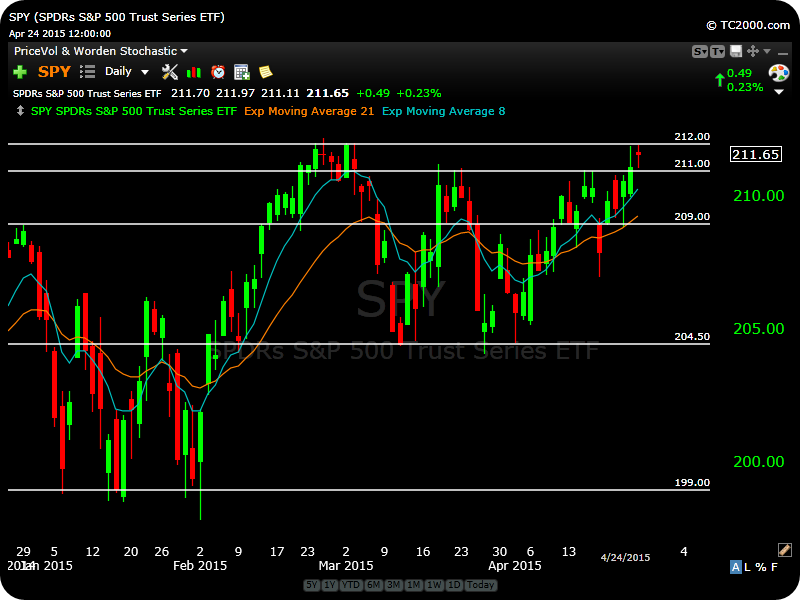 $SPY we had quite the reversal higher this week off of that horrible looking candle last Friday. In last week’s recap we noted the potential bearish thesis that Friday’s candle could have started but then went on to end our analysis with this note:

Ultimately I want to remain careful on the long side until this damage is repaired. The longer we stay below 209 with the open gap in tact the more risk the bulls have that this market will continue to chop around or roll over. Going into next week let’s be on alert to see if this was just a single day shake up or if more follow through is to come.

Well luckily for us, it only took 1 day to find out Friday was indeed just a single day shake up. We came in on Monday filling the gap immediately, reclaimed support, and then went on to close at new all time highs after a very busy week of earnings releases (SPY etf above doesn’t clearly show this, chart the cash market). There hasn’t been much traction made in the indices since late 2014 (over 5 months of chopping around) so heading into next week it will be interesting to see how the bulls follow up this new closing high. Will it lead to an explosive leg higher? Or are we in store for more of a sluggish grind? Or maybe will we fail and mean revert back into the range? The internals I look at, while not negative, aren’t suggesting a high probability rip roaring rally ahead of us. Earnings reports are still coming out in full force so there’s plenty of cross currents on deck for this coming week. After Monday I quickly changed gears back into the moderately bullish camp rotating around long ideas with about 50% long exposure. Heading into next week I want to see 211 hold and breadth continue to firm / accelerate to raise my long exposure. 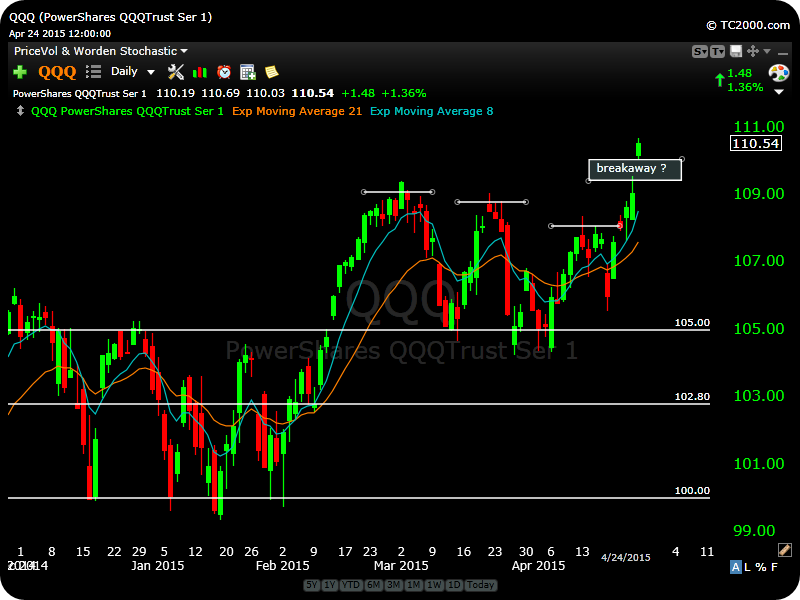 $QQQ the heart of the bull case this week was seen in the Nasdaq 100. A clear breakout above multi-month consolidation with an open gap left behind at the previous highs. This is the only index not to reclaim its all time highs (last seen in the year 2000) and it certainly looks like the bulls are determined to test those levels once again. It’s tough to be bearish on the markets when looking at a chart like this. Not much else to add, looks good. 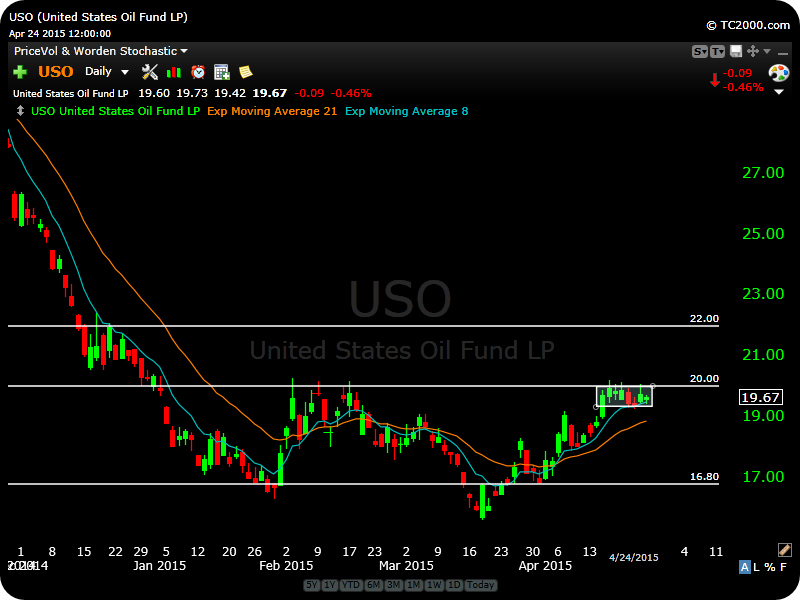 $USO the bulls managed to hold us pent up at the top end of this range for the entire week. The fast moving averages have caught up and we’ll need to have this $20 resistance level on watch heading into next week. It’s still my belief we could see sideways consolidation here for an extended period of time, but I certainly wouldn’t think about risking money to fade a move above this week’s highs. If $USO does manage to break out next week, the next big level of interest is around $22 coinciding with the range we were in December of 2014. 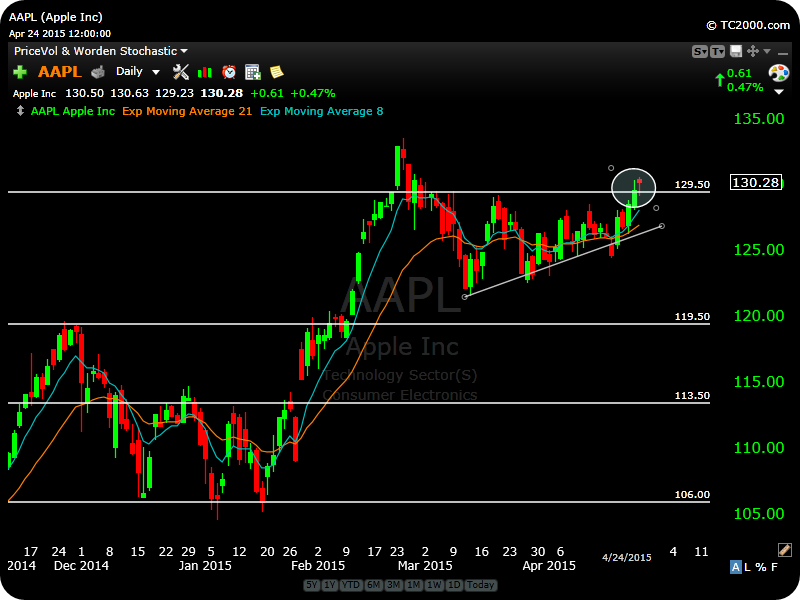 $AAPL earnings are out after the bell on Monday of this coming week and we’re seeing some bullish behavior heading into the event. We managed to close above 130 resistance on Friday and if their release wasn’t on deck Monday, I’d probably have gotten long this on Thursday. As always, earnings do trump any of the near term technical levels so all eyes should now be on the earnings release reaction. Good luck to those involved. 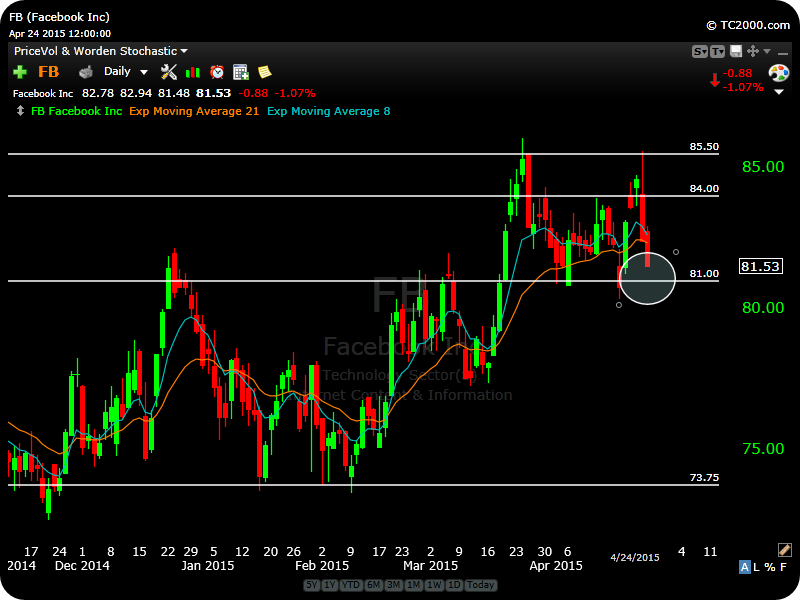 $FB reported earnings Wednesday night and saw a knee jerk reaction to the downside. Despite the initial bearish earnings reaction, it did manage to close out the week nearly 1% higher even though that was $4 off the highs of the week. The bulls still have a chance to prove themselves and I suspect it won’t take long to see how that plays out. $81 will be the big test for the bulls next week. That coincides with the March breakout on the weekly time frame, and is the line in the sand for bulls to hold in order to prevent this falling back into the previous range.