markets back to highs, did you catch it? 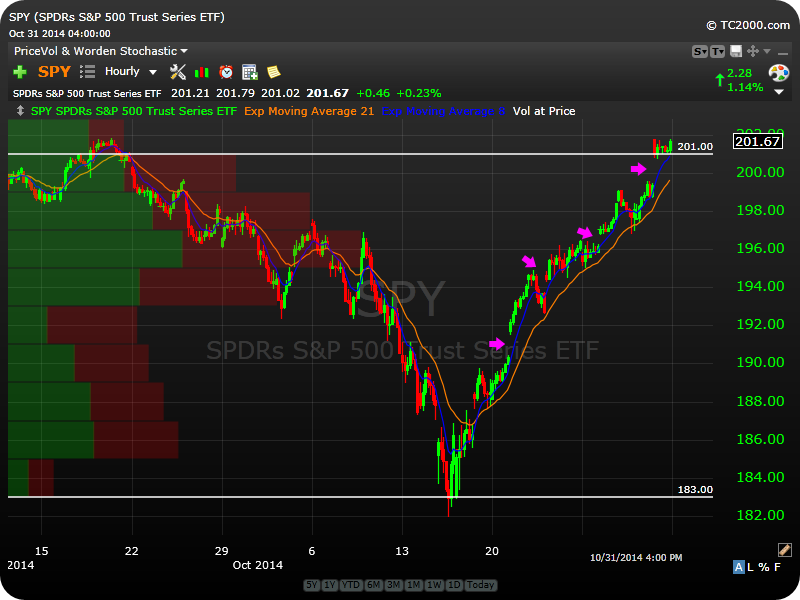 $SPY a run-away freight train pushing higher day in and day out to the upside. Your only option: get involved or be left behind. And judging by the speed of this move I have got to imagine many were left behind. The October washout in the indices are a thing of beauty as we’ve recovered from an 8%+ dip to barely making new all time highs in less time than it took the market to cause the damage. So now that we’re at back at highs in the SPY, what now? First, the action demonstrated by the markets over the past two and half weeks is as good as it could get for bulls. The markets have a tendency to overshoot at the extremes, but the simple fact that we managed to recover everything from the October lows in such short order bodes well if you’re long. Does that mean we have to continue to rocket ship higher? Of course not, but momentum is certainly skewed  higher right now. But before we just buy here and close our eyes, let’s take a look at the other side. If you are to look at the bigger picture, a weekly chart, you will notice that the prices right here around 202 are the ones that matter. These are the highs we rolled over from back in September that we’ll need to definitively clear above to attempt a new leg higher. Take a look at the next chart.

$NYMO the McClellan Oscillator is running at extreme overbought levels at around 85. Typically +/- 60 are the standard measures for relative overbought/oversold market conditions. So the bear thesis at this snapshot in time is that we’re at an inflection point based on the supply at previous highs and we’re trading at some very stretched prices. Both sides have merit, and for that reason, and for my trading style, I’m waiting for the market to cool off and put in some type of retracement or base in order to set up the next move. That could take a week, two weeks, or even a month. Whichever it is, I want to see some digestion take place to set up a new breakout to new highs, or a breakdown and roll over for some type of double top. 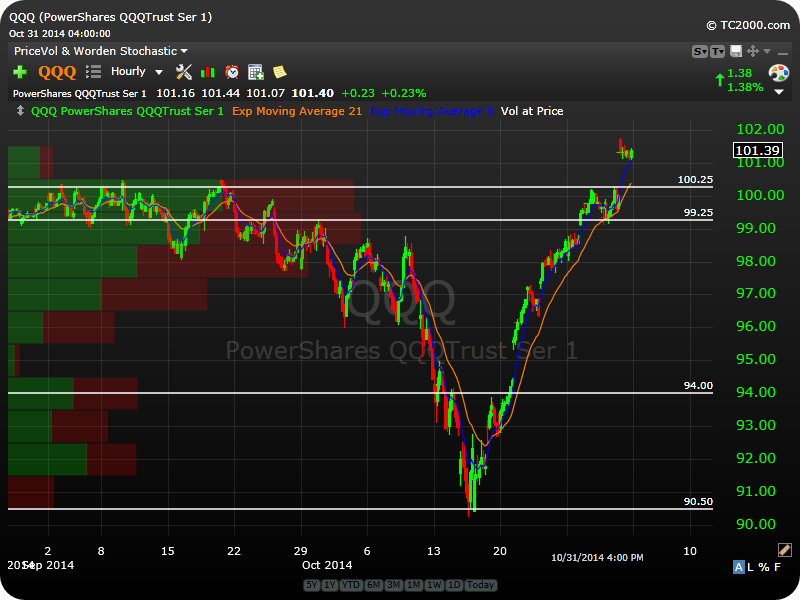 $QQQ for those long time Trade Risk readers, you know I’ve primarily stuck to the $SPY for my market analysis. But because there’s so much individual high beta analysis here I think it’s worth incorporating the QQQ’s when there’s some divergence to the $SPY. By and large, most of the analysis I laid out on the $SPY above applies here; however, the one key difference is that we have clearly broken above the previous September highs thanks to Friday’s gap higher. So for me, this is a much more bullish slice of stocks going forward now that we’ve cleared all recent highs. 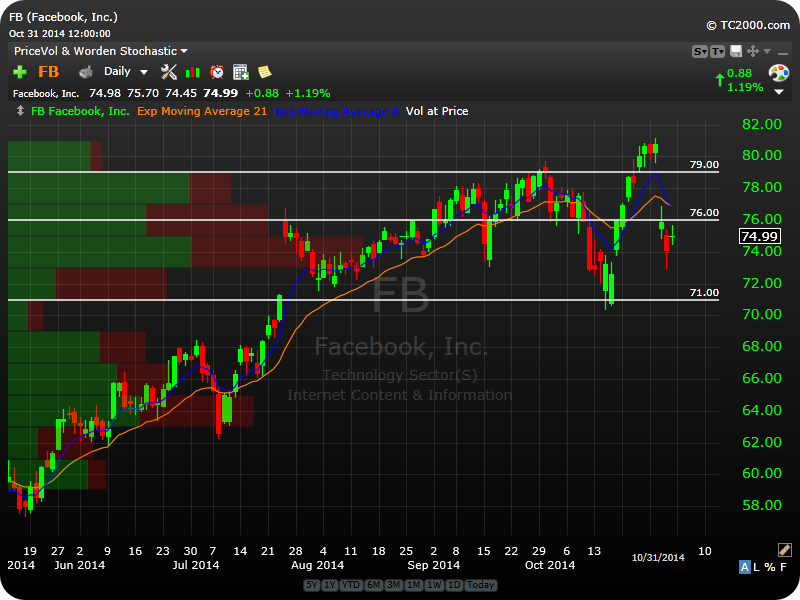 $FB earnings are out and the street reacts mildly negative to the numbers. Looking at the daily picture in Facebook we can see not much has changed. We tried to breakout to new all time highs above 80 just before ER but that attempt failed and we are now back to being held hostage within this larger 71 to 79 range. It will be interesting to see which way this ultimately resolves as the base here is getting larger and larger which would suggest  the next move could be very telling for the months to come. Give it some time, not interesting to me just yet. 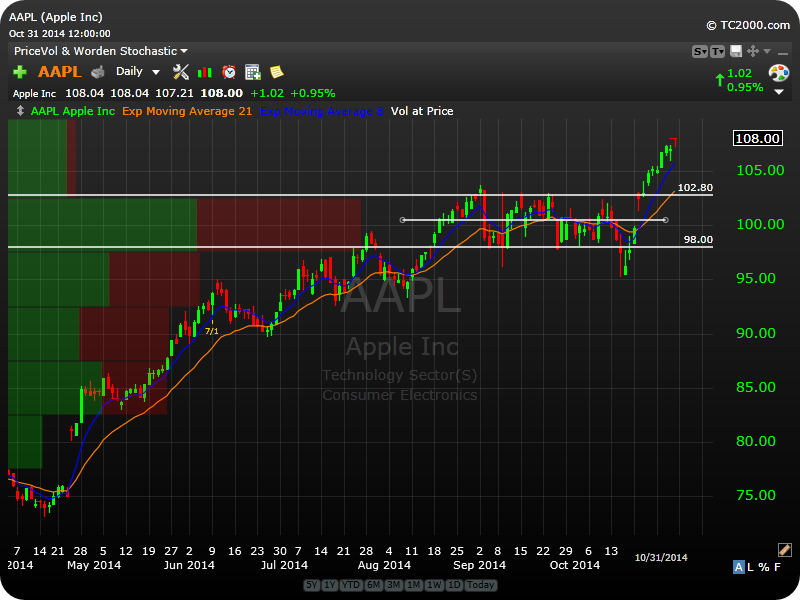 $AAPL a nice clean breakout  and trend from a multi-week range above this key 103 level. Apple looks great, and given that I’m not involved in it, I would love to see a high level multi-day base develop above 105 to give me another shot at getting involved. Not too much else to add, looks great. 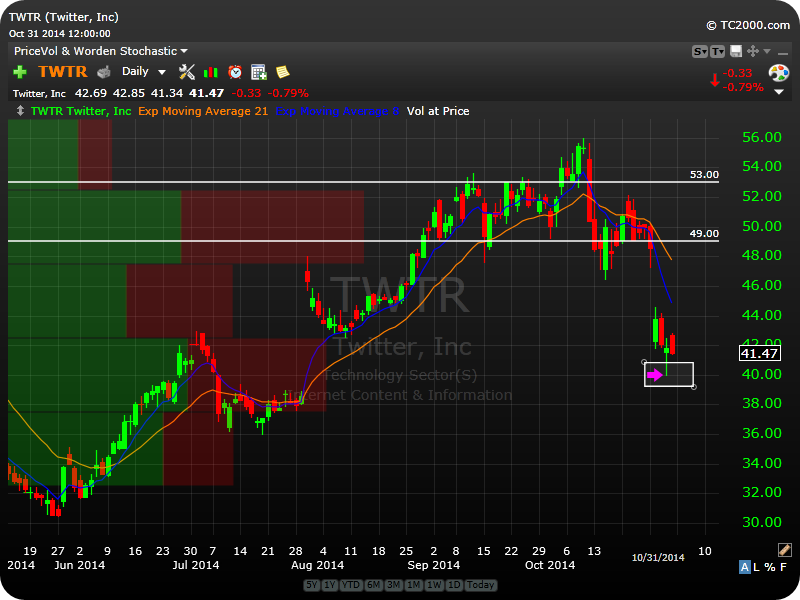 $TWTR earnings are out and the street isn’t impressed. Twitter broke down from a range it was carving out for two months and it spent the week trying to catch its footing. At 41, it’s into the large earnings gap from last quarters report which doesn’t close up until around $38. Despite the bullish tail on Thursday’s candle, the technical damage it has suffered as a result of earnings will require more time to heal up this chart. Stay patient, not interesting just yet. 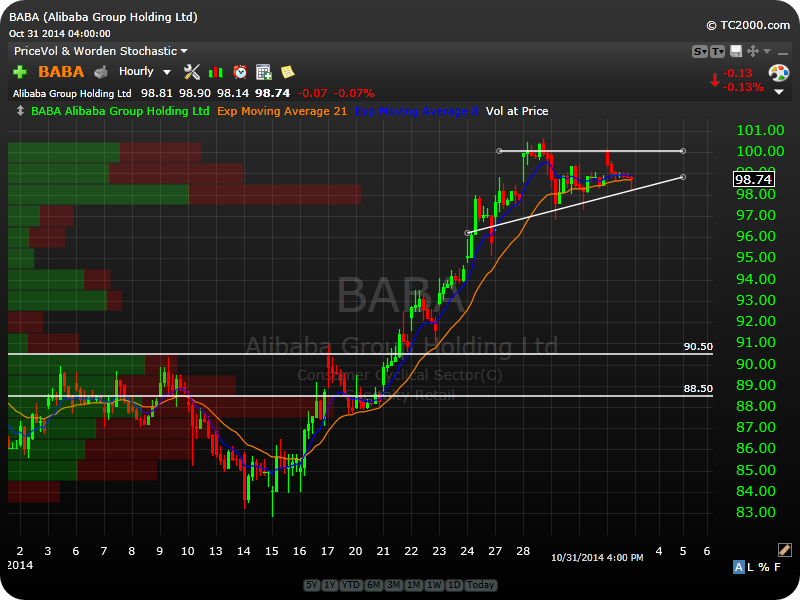 $BABA finally we got that breakout we were looking for above 91 and as a result we got a nice clean impulse leg to the upside all the way to the $100 level before stalling out a bit. It’s now in the process of putting in a nice high wedge with clear resistance at the nice round 100 mark. Above 100 would be a great spot to add or initiate new longs but with the companies first earnings report out on Tuesday, there’s quite a bit of event risk holding through that. Otherwise, this looks great.