$SPY we got that upside follow through this week as the bulls managed to clear 194.40 resistance and fill the open breakdown gap we had back on 7/31. And we did it in the very similar v-shaped rally fashion that we’ve seen time and time again over the past near two years now. The short term trend is now up, with higher highs and higher lows, and 194.40 will serve as a very good line in the sand going into next week as a bullish to bearish light-switch. Friday’s action is worth pointing out that we had a pretty strong reaction shortly after filling the open gap. Of course there was macro news breaking at the same time, but we don’t care about the reason, only the price action. So heading into next week this 194.40 – 196.60 would be a reasonable range to chop around in before resolving a direction. Are we going to just ramp back up to new all time highs, or is this currently impressive v-shaped rally only going to fall short and lead to a lower high in the larger intermediate trend? I’ll be waiting for this near term range to resolve to give me my directional bias. 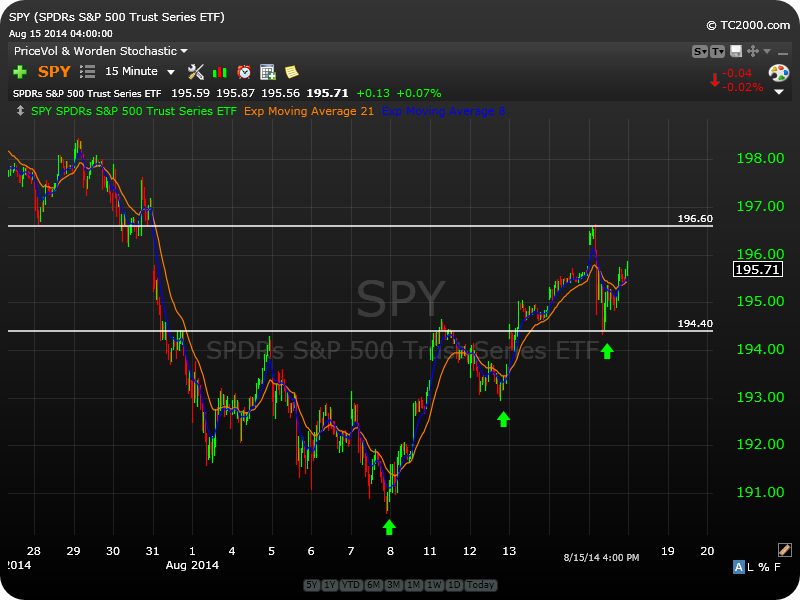 $FB here’s one that I was in and out of this week. On Wednesday it looked like we finally had the liftoff we needed to break up and out of this range and head back to the post earning announcement highs at 76. Instead we chopped around for two days floating right above prior resistance and ultimately broke back down and into the multi-week range. It was enough to shake me out of my long position and now I’ll need to see some 74.50+ prices to get back involved in Facebook. Back on watch. 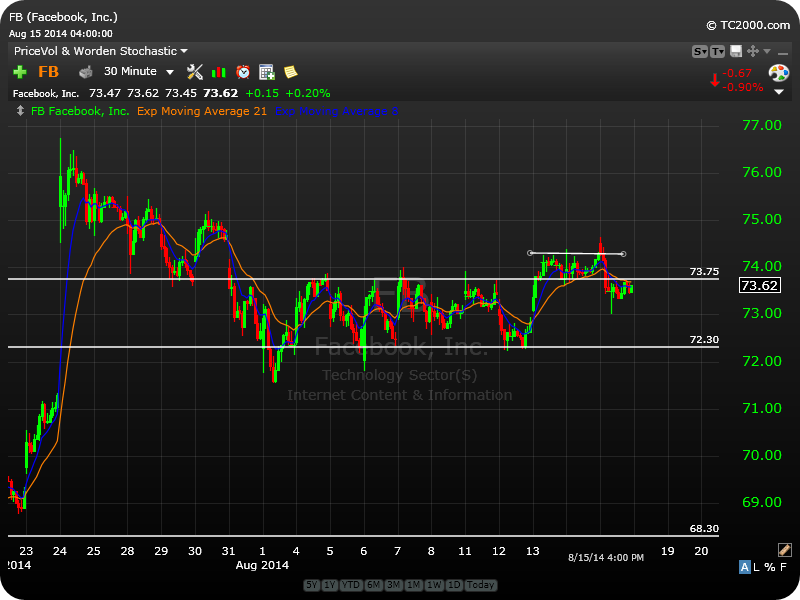 $NFLX I flagged this one last week in my review pointing out it’s leader status, and base breakout, and that momentum carried right into this week. It chopped around for a bit but ultimately it cleared the 450 level and closed the week near the highs. I really like the action in Netflix going forward and I will be stalking a long entry in it next week. Now that we’re above 455 there isn’t much in the way to retest the all time highs at 472. Looks good. 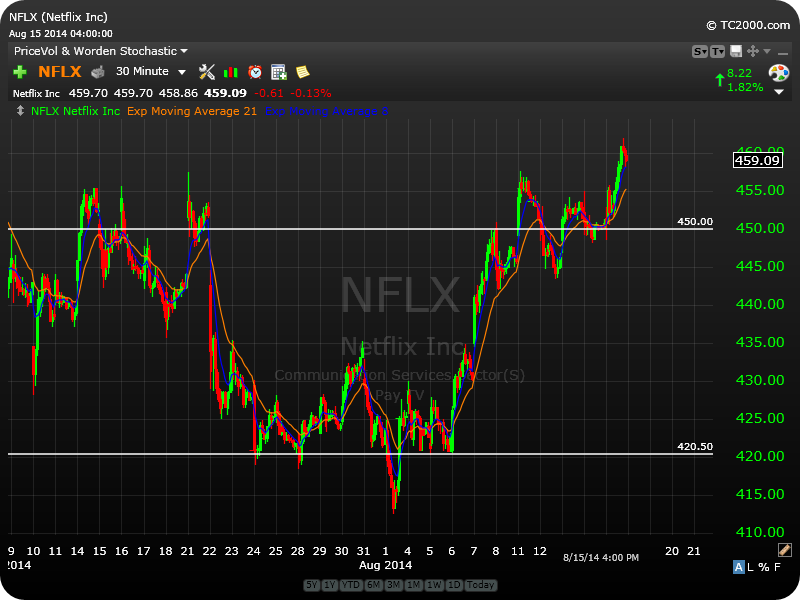 $AMZN here we have an island bottom after Amazon gapped up on Wednesday above prior 320 resistance and is now in the middle of it’s earnings breakdown gap. Short term the trend is up and so long as Amazon can hold this recent gap above 325 it looks in motion to continue grinding higher. Interesting chart, near term constructive, intermediate term still damaged. 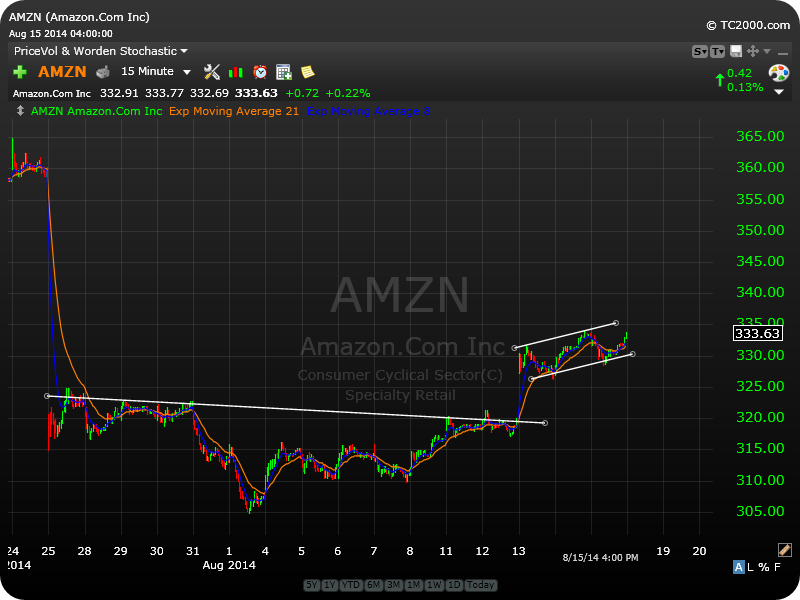 $TSLA catching it’s breath at all time highs, Tesla is flagging out in a very constructive manner after a powerful leg higher immediately following earnings. I would love to see a longer base take shape here over the next week before Tesla goes again, but of course my wishes are no concern of the market. I’ll take what I can get, and if Tesla decides to break new highs next week, then I plan to be involved for at least some intraday trades. Keep this one on watch, looks great. 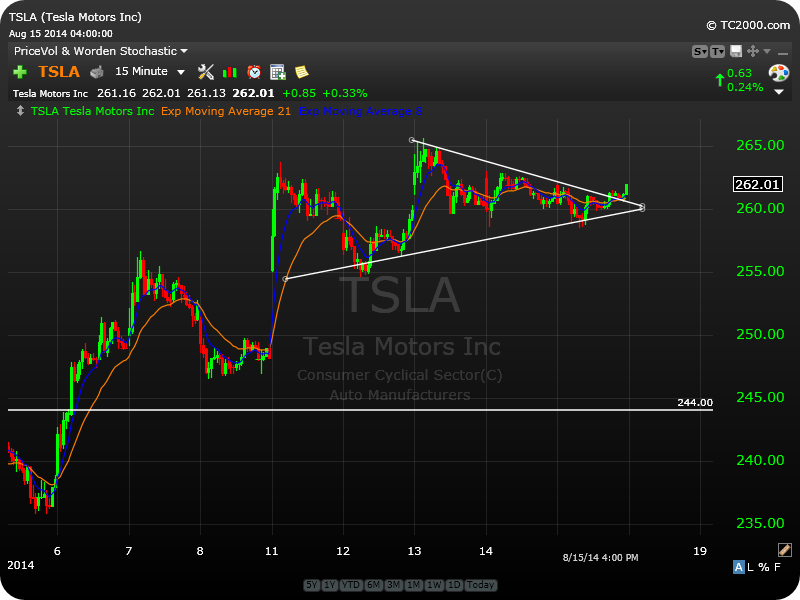