mixed market signals all around

The stock market is never obvious. It is designed to fool most of the people most of the time.  -Jesse Livermore

$SPY well I missed last weeks recap due to some extended easter family time and lots has happened in the past two weeks in the markets. We closed this Friday at the dead center of this recent range dating back a couple months now as the market is still having a difficult time definitively resolving this range one way or the other. Last weeks breakdown of 184 proved to be one big headfake [cue jesse livermore quote] and bear trap as we came exploding through the bottom end of this range with little trouble. There are so many mixed signals in the market right now that it pays to take a step back and be ever more selective when putting your capital to work. One of the key distinctions right now is stock and even sector selection. The divergence and under performance from the nasdaq and russell  as compared to the s&p has continued to play out. There continues to be relatively no market appetite for growth stocks. I’ll get into individual issues below but when many of the high beta stocks have reported good to better than expected earnings the reaction was nothing but stay flat or sell off. That type of reaction to otherwise “good news” should raise some caution signs in the back of your head. It’s a mixed bag right now, there are still lots of stocks performing well but there are equally as many doing the opposite. The SPY breakdown reversal this past week is BULLISH but price still remains trapped within this range. Until we are above 189 or back below 184 we could be in for a long period of continued chop. 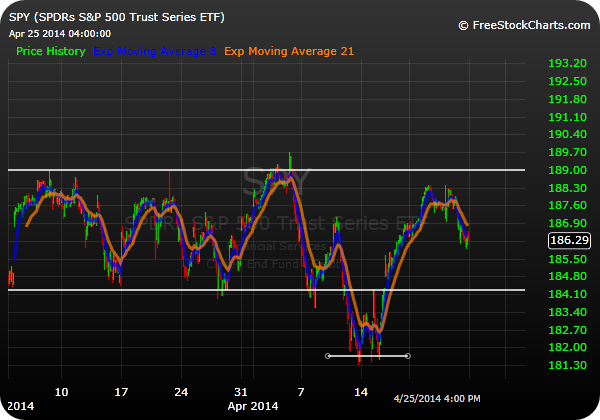 $AAPL boom boom the sleeping giant comes alive and throws a few curve balls on their earnings release (increased buy back, increased dividend, stock split) resulting in a gap higher to previous 52 week high levels. It spent the two days after earnings digesting tightly and inched up to new closing yearly highs on Friday. I did not own any Apple into the release but I did pick some up afterwards and continue to hold some into the weekend. It’s had a large move but the price action seems to be suggesting there might be some more fuel in the tank before a more meaningful retracement or consolidation takes place. I’ll stay with it until it doesn’t work, I could be out on Monday or I could be out in a few weeks, i’ll let the price action decide for me. Right now I’m using 567 as my stop and will continue to trail as price moves in my favor. 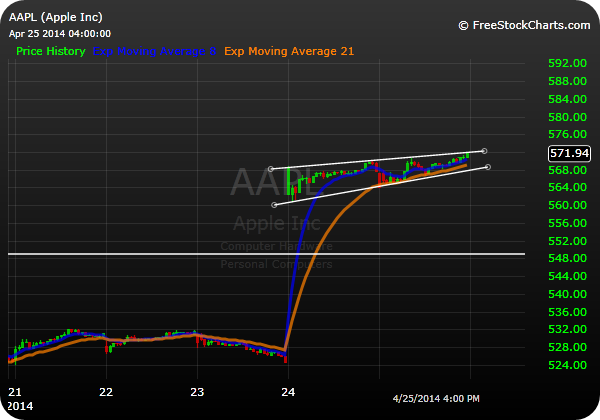 $GOOG continues to trade lower in this falling channel after breaking 530 support. Sloppy, messy, and no real bid Google remains a much easier short than it is a long. I have no interest in shorting Google beyond a day trade and even less interest in trying to be long of it. If price can reclaim 535 or so it would be worth a look for a trade to the long side other than that, nothing. 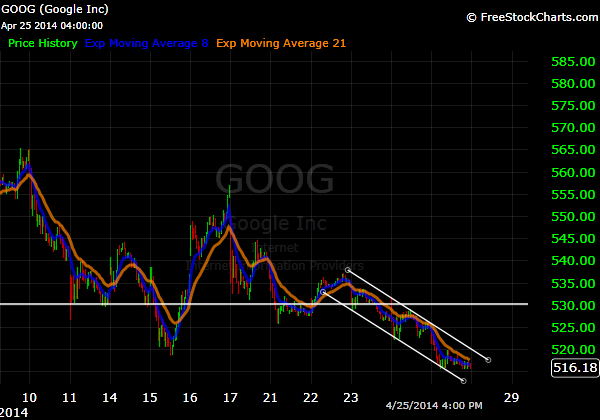 $NFLX here’s an example of a stock that reported good to better numbers, initially reacted well and then did nothing but sell off to the bottom end of this very large range. Similiar to Google there does not appear to be any real bid in this name right now. It’s a day trading vehicle but for swing trades the short side is certainly more attractive than being long right now. Look for support down around 310. 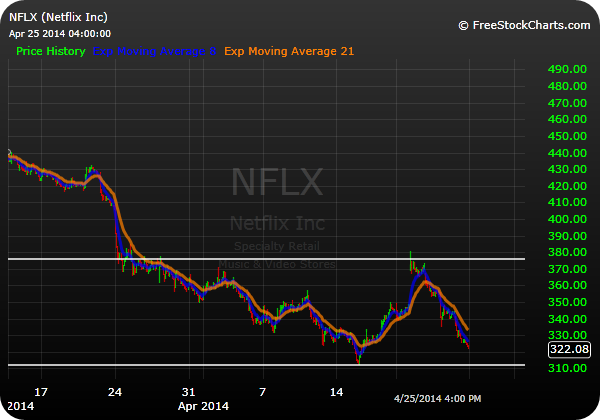 $FB good earnings, good initial reaction, but it did not take long for the sellers to start hitting the bid and selling this one off. Facebook remains a sloppy chart but what I like here above some of these other high beta charts is the slightly tighter and controlled base. 55 to 63 is still plenty wide but you can see price now ping ponging in between here which is what you want to see after a sell off. Basing action, controlled accumulation, and an eventual breakout of a defined range to higher prices. It’s tough to say we are seeing controlled accumulation at this point but the basing thus far is constructive. 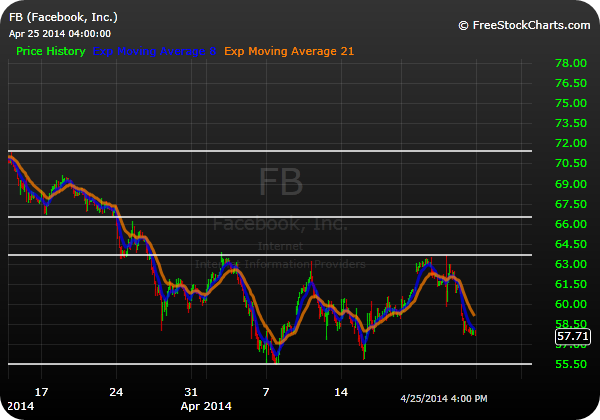 $AMZN another harsh breakdown after earnings Amazon closed the week on the lows and it’s threatening to breakdown further from the previous pivot lows at 305. This one certainly needs more time to see its intentions but after day 1 of reporting earnings it looks like there are still plenty of people looking for the exits. Watch 300 next week, below there 280 comes of interest. 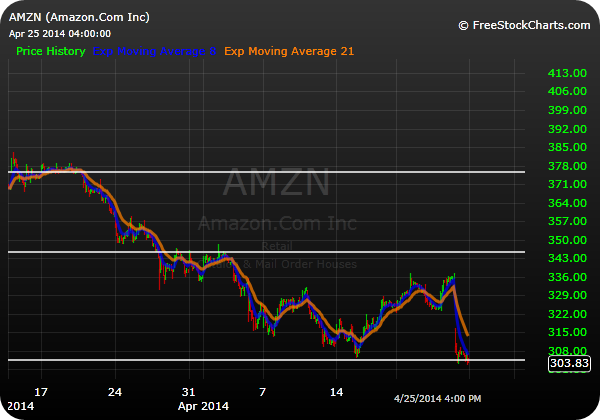 $TSLA I put Tesla in the same camp as Facebook. It’s still not the most constructive chart, but you can see more controlled overlapping ranges being worked out here as compared to amazon, nflx, etc. Along the same lines as many of these names I have no interest in Tesla just yet on the long or short side. Above 220 I would say its worth a look to be long but until then I’ll stick to day trading it. 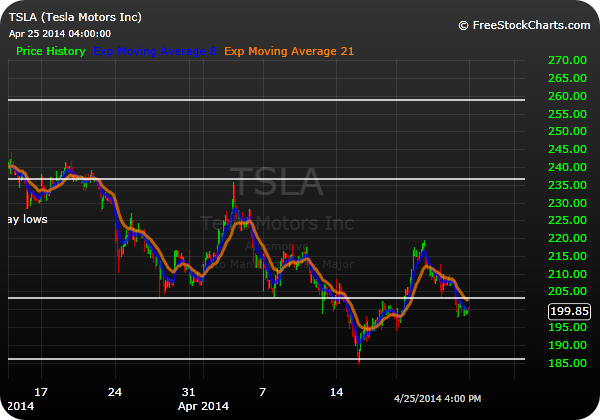