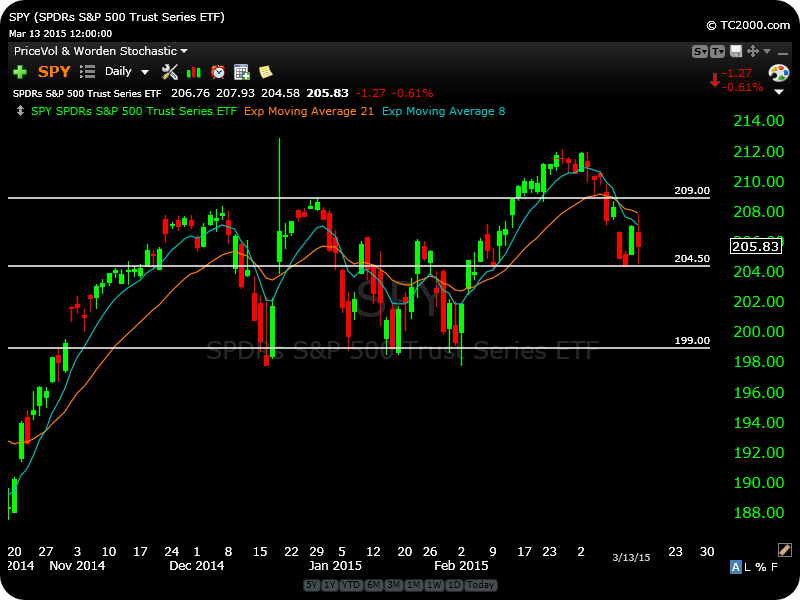 $SPY in last weekend’s post we noted the important change in market character as we definitively broke down below support and fell back into the previous range of $SPY 199 to 208. We closed this week slightly off the lows, but still damaged enough to award victory to the bears for their continuation lower. 204.50 is the near term area of support to have on watch heading into next week, and on the upside 208-209 zone is crucial for the bulls to reclaim if they are to restore their prior uptrend. Given the recent price action I wouldn’t be surprised if we saw more chopping around these levels before we get the next directional move either up or down. The fast moving averages are quickly racing down, and with the recent damage already done, the bears have the advantage to press this market lower. I’m staying pretty selective in my holdings and picking my spots carefully with no large bets one way or the other. Keep an eye on this week’s lows, and let’s see what action develops into next week. 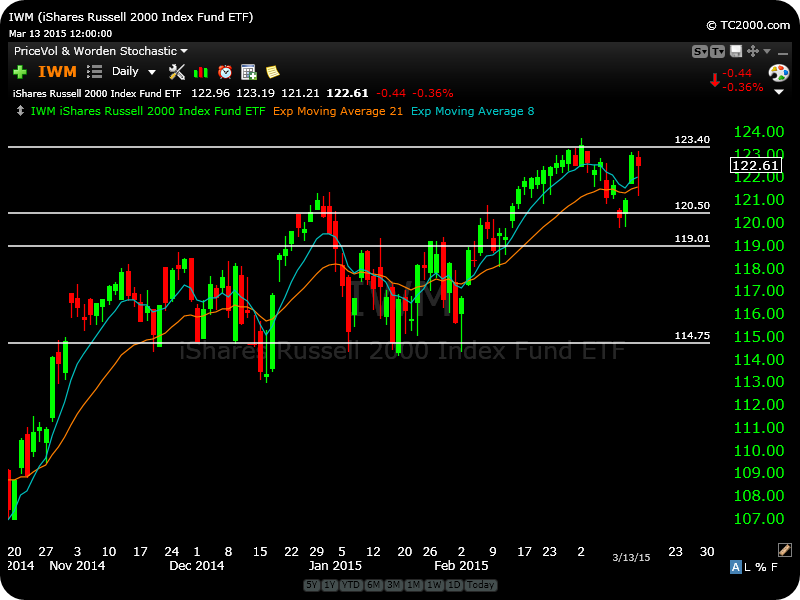 $IWM the small caps diverged significantly this week as they managed to stage an impressive 1.19% rally on the week. The prior breakout level at 120 from February was successfully tested on Tuesday which paved the way for a strong bounce into the end of the week back toward the highs. Traders are attributing this outperformance due to the fact the parabolic move in the US dollar has less effect on these small cap companies than the big multi-nationals. Seems logical to me, but I couldn’t tell you for sure. All I know is the price action here looks very different than the $SPY, $DIA, and even $QQQ. If you are looking for a sector to be bullish on, this is the one that should have your attention. Perhaps this index is the leading signal for what’s to come from the others. Time will tell, and I’m watching closely. 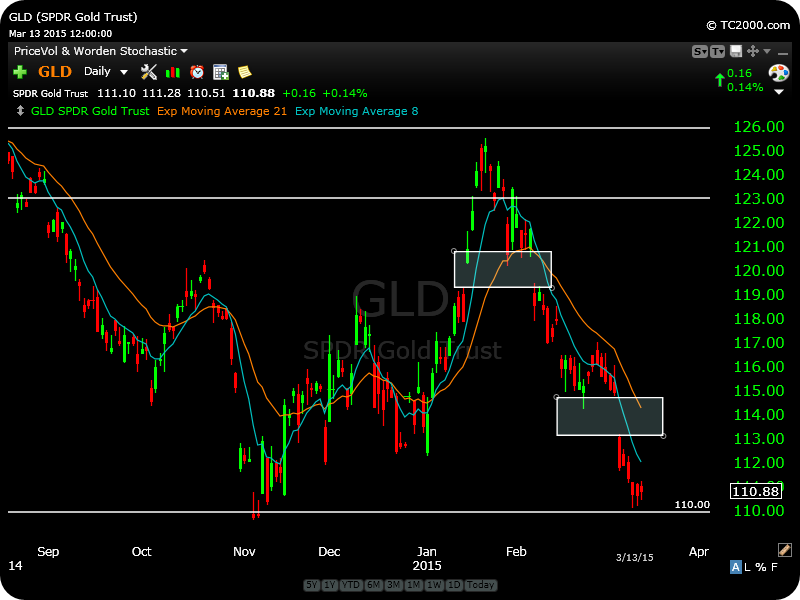 $GLD a market I rarely cover in my analysis, mostly because the price action always seems to be messy with few clean technical setups. But because it’s back to such an important level, I think it’s worth noting that we have retraced to the 2014 lows at 110. The two very powerful clues demonstrating the bear strength are these two breakaway gaps that never came close to filling. After each one of these gaps lower, price continued to follow through strongly to the downside. We’ve fallen a far distance in such short time so perhaps a bounce here or sideways action is in order before anything else. Bottom line, the lows at 110 are important for bigger picture in gold for you intermediate to long term players.

$USO similar to Gold , oil finds itself back to recent lows, only in this case these are prices last seen only 1 month ago. I managed to get short oil on Thursday around 17.65 as it broke down from near term support that had been holding for most of the day on Wednesday. That trade ended up working nicely as we closed on the lows Thursday and then saw some bearish follow through on Friday. We’re just a stones throw away from the 16.30 lows made back at the end of January and this should be a good gauge to see how much demand comes in here on a retest. I’ve covered 30% of my profits on Friday and I’m waiting to see more of a reaction one way or the other before I trim or exit the rest. This is another market the almighty dollar strength seems to be effecting. 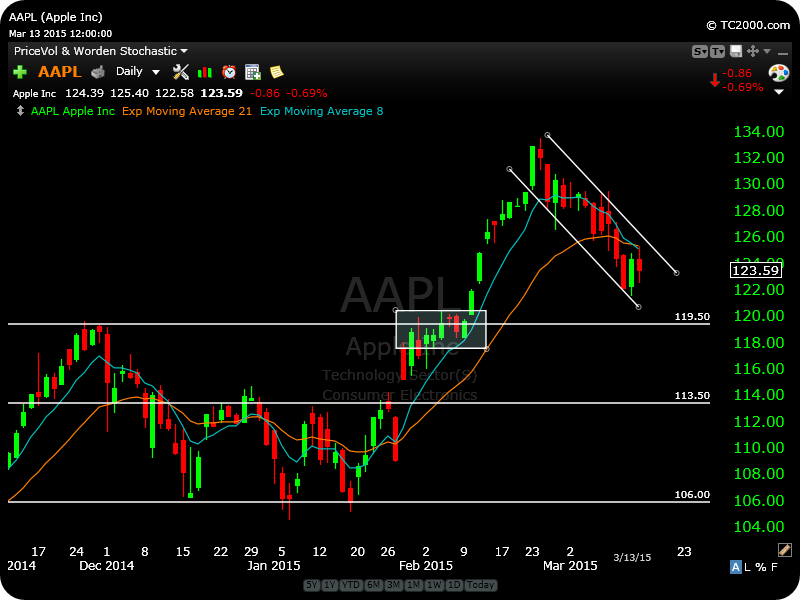 $AAPL finished down over 2% this week as this relatively orderly pullback continues its slide lower back to the prior breakout level at 120. While the action over the past month has not been entirely pleasant if you have been long, the technical landscape still looks very healthy in nature. After such a large upside move to start the year (from 106 to 132) the fact that we have yet to retrace even 50% of that move demonstrates the strength in this name. Keep an eye on the lows of the week, and the prior breakout level of 120. This is where you would want to see the bulls step up if they are to going to keep this chart looking as healthy possible. On watch. 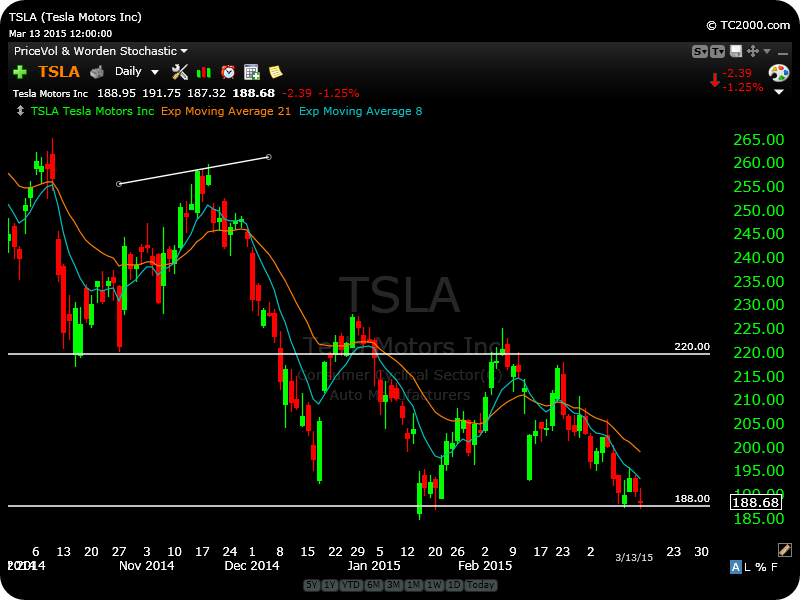 $TSLA has made it into my weekend recap two weeks in a row due to its recent positioning within this important range. 188 to 220 is a relatively wide range, but it’s an important one for the intermediate to long term holders. We found support down here in the beginning of January which set us up for a 30+ point bounce to the upside before rolling back over again and creating this latest leg down of sliding price action. Can the bulls save this one again? The lows of the week will be important to hang onto if we are to see this bottoming process take shape. And on the other side, a clear break below 186, could be a pretty nice looking momentum short entry for a new leg lower. On watch.