It was only a few weeks ago that we were pointing out the collection of extreme bearish readings across various studies and now we find ourselves roughly 10% higher in the $SPY and “the indicators” are pointing to some new opportunity.

Boy how quickly the pendulum can swing. 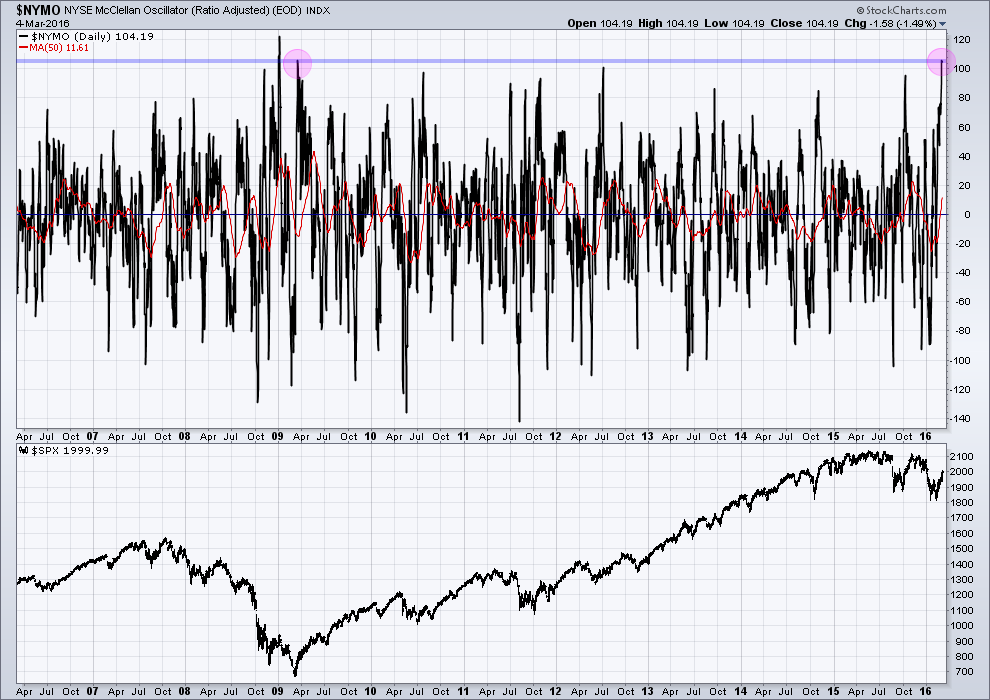 Now take a look at the cumulative advance decline line. Notice the relative positioning between where $NYAD closed and where the $SPY is. $NYAD has already exceeded the pivot highs from late December meanwhile the $SPY is still several percent lower from that same point in time (207).

This type of broad based relentless buying generally suggests there is more to come and isn’t something that will quickly and easily unwind itself.

Are we overbought? Absolutely.

Can we trade lower next week? I hope so, mainly because I have a short SPY position on, but also because it would be very healthy and set up opportunity for further upside.

If you’re familiar with Martin Zweig he’s written his own indicator, the Zweig Breadth Thrust to identify these strong surges of buying. He claims when his indicator moves from below 40 to above 61.50 in a 10 day period, you have a new bull market at hand.

We just traded those extreme levels he pointed out, but not in a 10 day time-frame like he prefers, rather we did it in 12. Is this some 100% foolproof indicator? absolutely not.

Hell back in October of 2015 we basically had this same situation play out and it only carried us sideways for 3 months before the cracks surfaced again.

I’m not here to convince you we’re on the edge of a “new bull” or everything’s rainbows and higher prices going forward. We just covered a ton of ground and a short-term pullback is heathy.

I just want to point out that the markets tone has very quickly changed, and if you stick with your January 2016 bearish mindset for too long, you may have difficulty ahead.

Good luck out there.