pedal to the metal in neutral at highs 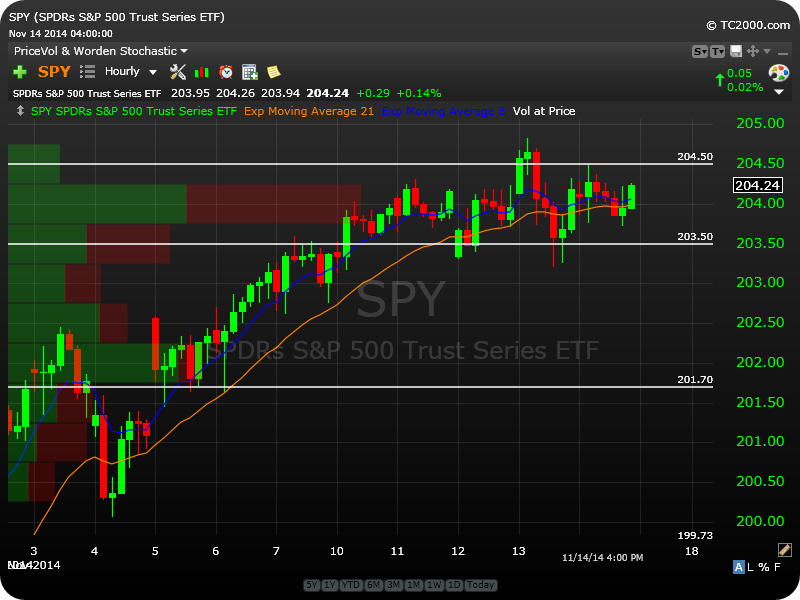 $SPY so in last week’s recap, Embrace This Rally While We Have It, I laid out my bullish yet tactical approach to the impressive bull run we’ve seen over the past month in the indices. Most of the points still hold true, so have a read if you missed it. As for this week, we got some relatively sideways action with a hint of continued bullishness. The sideways action is good, it’s healthy. And it also paves the way for some new scenarios that could unfold in the coming weeks.

Whenever you have prolonged periods of price compression (which is what we look for at The Trade Risk premium) it will ultimately lead to price expansion, which takes the shape of a breakout or breakdown of recent levels. In this case, we’re starting to see a flat base develop in the $SPY between 203.50 and 204.50. Because we’re in the context of a strong uptrend, it’s easy to assume momentum will continue and this range will ultimately turn into a continuation pattern. But those who lean a bit more pessimistic might find themselves thinking this is all leading up to a roll over and that we’re going to see a breakdown from these levels.

Well someone’s going to be right, and I have not the slightest clue which side it will be. The beauty about remaining unbiased and reactive is that I’m looking to get involved in a trade in either direction. 203.50 to 204.50 is the range to have on watch heading into next week. 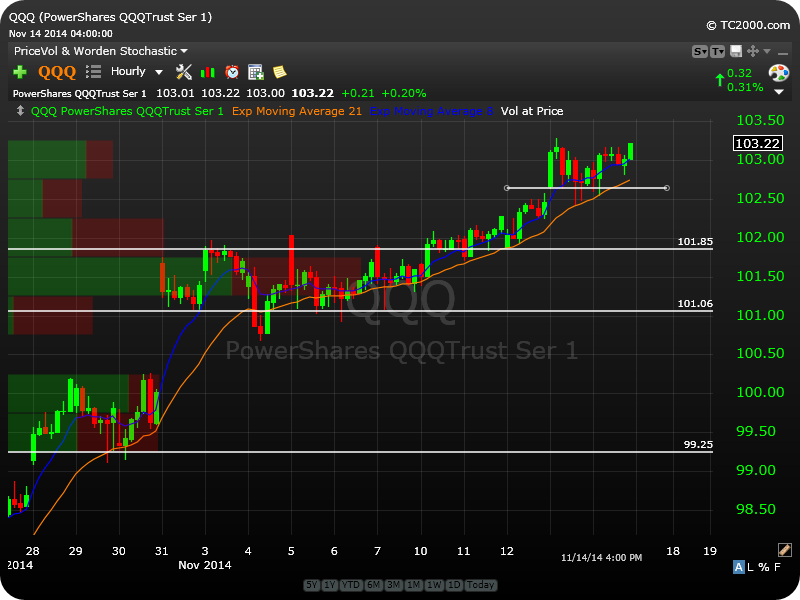 $QQQ speaking of ranges, 101 to 101.85 is what we were watching last week, and you can see we managed to get the breakout first thing on Monday and continue to grind higher for the rest of the week. The QQQs outperformed this week, influenced mostly by $AAPL which we’ll get into next. All in all, everything looks great and there’s not a cloud in the sky if you’re a bull. 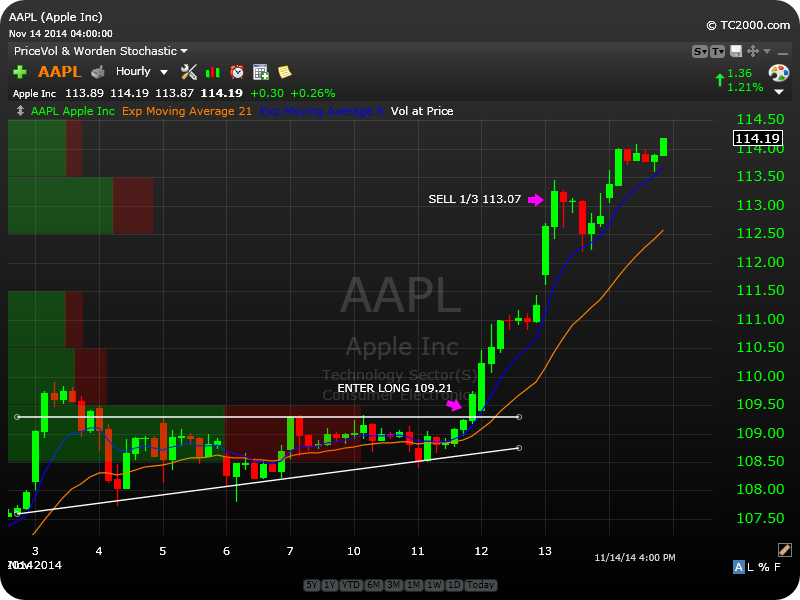 $AAPL in last weeks post I wrote about Apple, the run it’s had over the past few months, and the tight continuation pattern that was potentially unfolding if the stock could get a breakout and hold above the clear 109 resistance. It just so happened we got exactly what we were looking for and the premium members capitalized on the trade by getting our buy signal at 109.21 as it showed signs of holding above resistance. We continue to hold onto the majority of the position over the weekend after selling a piece above 113 and we continue to trail our stop. It’s tough to chase Apple given the move it’s already had but if you’re in it, then I like owning it until it gives us a reason not too. Definitely a leader here as it pushes new all time highs. 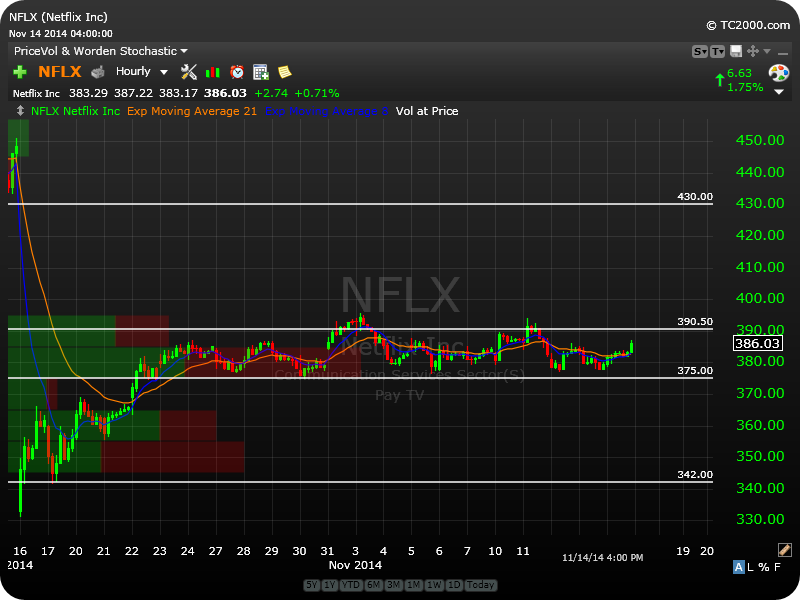 $NFLX here’s a name that’s catching my attention after tightening up for over 2 weeks in this 15 point range between 375 and 390. Netflix has retraced roughly 50% of its recent earnings gap down and it appears to be building energy to either complete the gap fill or roll back over and head towards the lows. I have no idea which way it will break but I’m certainly interested in getting on board for the move. Keep this name on watch next week and try not to get chopped up until its clearly in motion. 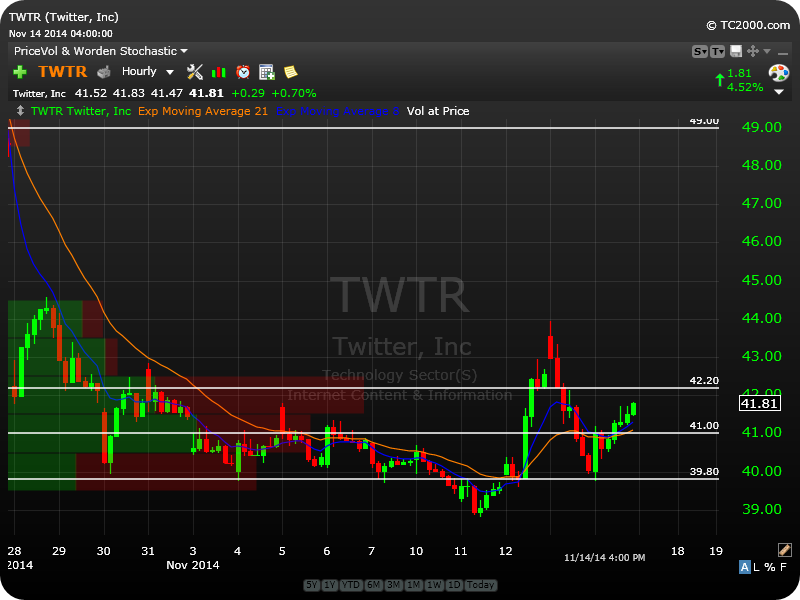 $TWTR last week I wrote about the feeling of lifelessness in Twitter and the recent price action, but this week we certainly got some sparks of enthusiasm in the name surrounding their live event on Wednesday. A big pop on Wednesday followed by a swift drop on Thursday and then a bounce higher into the close on Friday to finish the week mildly strong. The indecisive moves still demonstrate the tug-of-war between the bulls and bears at these levels and it seems like we may need some more time here before we get a definitive directional break. A low to high range of 40 to 42 and a point of control line in the sand around 41 is what you’ll want to have on watch next week. I would prefer to see this tighten up a bit more in this range to give me a concrete breakout setup going forward. We’ll see what we get.

$BABA the momentum darling of the past month is finally taking a small break here after finding some eager profit takers around the 120 level. Everything here still suggests strength and clear directional control by the bulls which makes me want to get on board. I like the range that is being carved out here at highs and I would be very pleased if we could get another week of sideways action before making another run on new highs. I’ll be watching this close next week to get involved.