$SPY so last Sunday in my recap, more all time highs or breakout failure I talked about two scenarios that could play out over this past week and what type of price action to be on the lookout for each case. Now that the verdict is in and we closed a second week on the lows (although not incredibly bearish) it still confirms that we are not ready to hit the ground running higher after making new all time highs in the S&P500 last week. So what can we expect next week? Short term we continue lower in a falling wedge making lower highs and lower lows. When price begins to compress in a fashion like this the result could be a breakout in one of two ways. A continuation pattern, accelerating price to the downside or a price reversal breakout to the upside. Now to add some context to this current price action we should realize the intermediate and longer term trends are both up with a gap still open at SPY 166.92. All things considered it is a fairly tricky environment to “predict” and place bets at this point especially when you consider some of the more macro headlines getting thrown around recently. However, short term I find it much tougher to be bullish here without more signs of stock leadership and firming price action so for now I remain neutral with a bearish bias. My advice: do not overtrade and get chopped up while price compresses, keep patient for your A setups or wait for a breakout or breakdown. 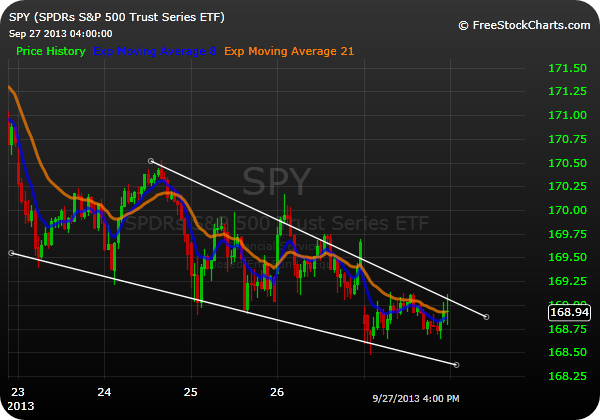 $AAPL started off the week with a bang for the bulls sporting a near 30 point gap up on Monday after the initial iphone 5s orders were released. For the rest of the week however Apple formed a very clean descending triangle with a floor at 481 offering support some 6 times throughout the week making the line in the sand very clear here for the bull and bear case short term. The longer term daily chart of Apple is just a sloppy mess. Gaps every which and expanded daily candle ranges doesn’t fit the bill for the typical calm clean bullish action that most would prefer to see. However, in the charts defense there has been alot of headline buzz about the company recently between Mr. Icahn, product announcements, and sales numbers. Now that most of the news is behind us until earnings season Apple should start to settle in and show us what it really wants to do going forward into the end of the year. I tend to think this gap will get filled and I wouldn’t be surprised to see the 450 area tested again even in the “bull” case. To me, that is the important level to hold for longer term Apple bulls. Until then however, 480 to 495 is your current range. 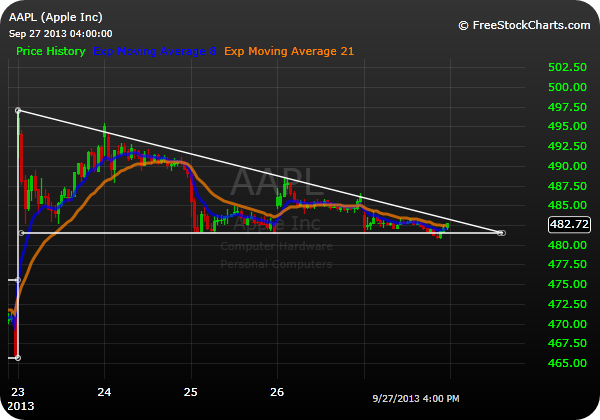 $GOOG certainly saw the sellers regain control this week in Google breaking it down from that high level base it was in last week at 895 and then continued to crash it through the larger support at 885. After breaking those levels I really do not see much price support in Google until you get back down to the 850s which is some 30 points lower from where it closed on Friday. There is nothing here that would make me want to step in and buy Google and in fact its probably one of my favorite shorts going into next week if we see the market continue to breakdown below Fridays lows. 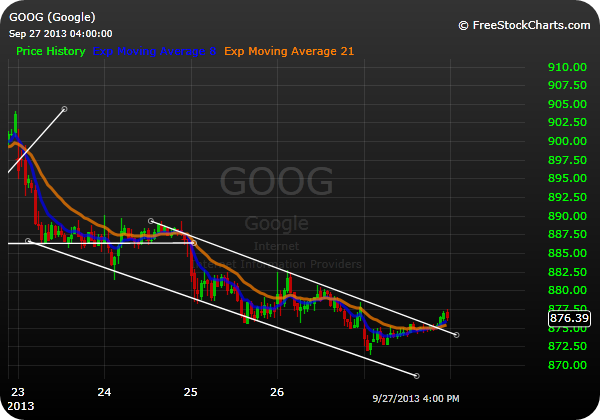 $NFLX what better way to scare the hell out of longs and shake out all the weak holdings then by gapping to new highs on Monday and then literally waterfall lower in straight line fashion some 20 points within the first 90 minutes of trading. I surely thought this was the 2013 change in character day that might finally signal an end to this epic bull run all year in Netflix. But to my surprise we saw no follow through selling on Tuesday and as a matter of fact price just drifted higher each day for the rest of the week nearly tagging 315 again on Thursday. I think Mondays action still remains something to be aware of and to keep in the back of your minds going forward in Netflix. We’re back at the top end of the range and nearly at all time highs but the first warning shot was fired in my mind on Monday. Tough to be bearish given the fact we recovered 75% of that sell off but my confidence in this leader remains a little rattled. 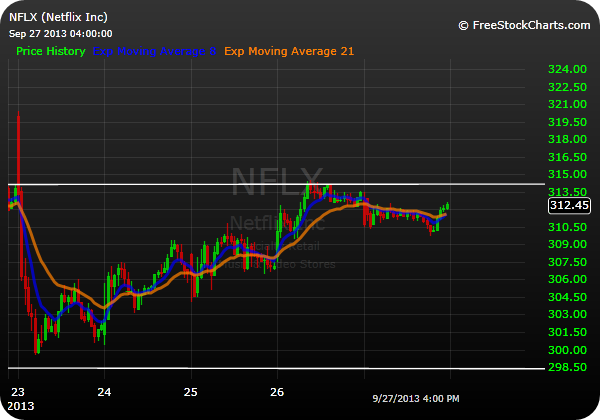 $FB talk about bucking the trend of most stocks this week as this leader continues to climb to new all time highs. What could have been seen as an exhaustion gap on Monday never confirmed and price continued to breakout to new all time highs later in the week. There isn’t much to say here when a stock is at all time highs in a strong uptrend while the rest of the market slugs it out in a relatively bearish to neutral tone. Clear leadership and accumulation, with no supply overhead. Congrats bulls, let the good times roll.

$AMZN is another stock that showed some relative strength this week as it slugs it out near all time highs making higher highs and higher lows this week in this ascending channel. Overerall if you are a bull in this name you can’t be upset with the action you saw this week. I continue to remain positive on this name and I think it is a great vehicle to trade to the long side. Because it is a little sloppy at these levels my next level of interest would be above 320 to all time highs. 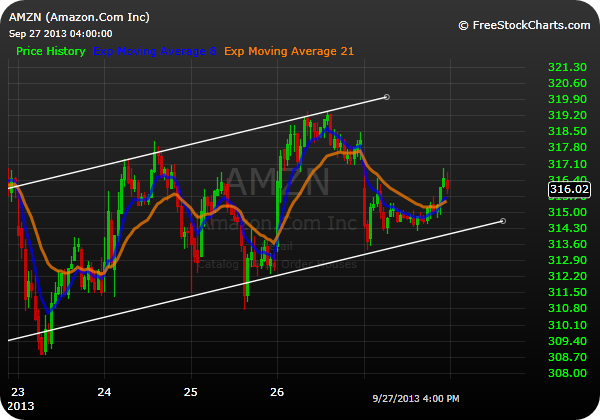 $TSLA similar to Facebook, Tesla marched to the beat of it’s own drum this week completely ignoring the movement of most other stocks and indices and continued its march higher making new all time highs day in and day out. Last week I was very bullish on the name, owned it for most of this week in my swing account but decided to take profits on it only because of the action i was seeing in the indices.  I think this name continues to look well and dips remain a buying opportunity. 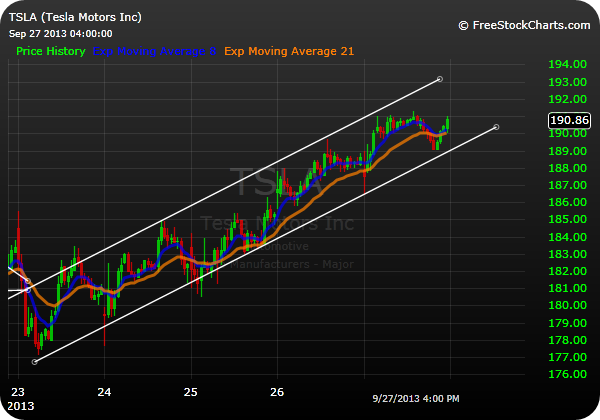