rally halted by resistance all around 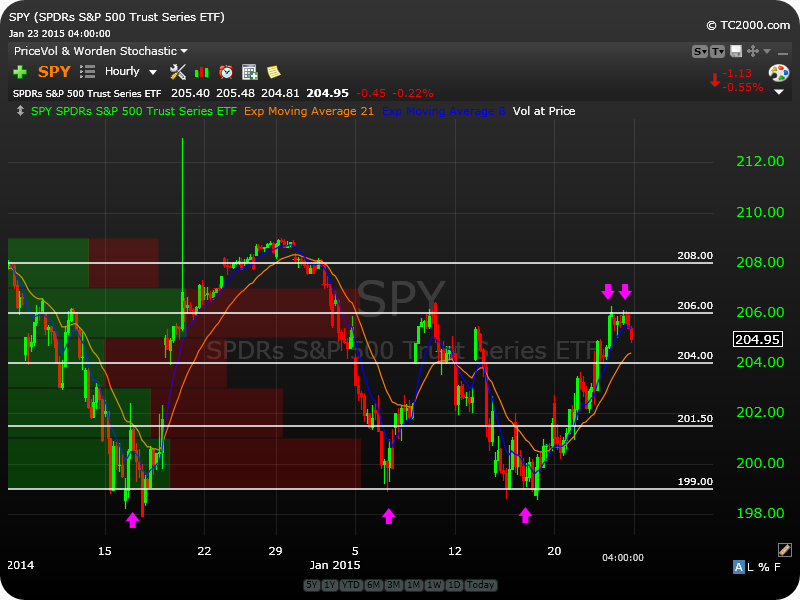 $SPY the bulls made some nice progress this shortened holiday week by continuing their thrust higher off critical 199 support. 3 days of advancement and a bit of a stall on Friday as they failed to continue higher above a fairly significant point of resistance at 206. As it stands now we’re about 0.28% in the red for the year and we’re heading into a pretty heavy week of earnings releases with names like $MSFT, $AAPL, $YHOO,$AMZN, $GOOGLE and more reporting results. I’ll be watching closely to see if the late day weakness on Friday spills into next week, and what, if any, progress the bears can make in breaking us back down into the recent choppy range. Overall this type of environment is still uncertain, but after this week, the bulls are putting up a good case that they want to see higher prices. 206 on the upside is important to keep on your radar, and on the downside 199 is the major level with lots of mini support levels in between. Keep an open mind, and be sure to check your holdings earnings dates. 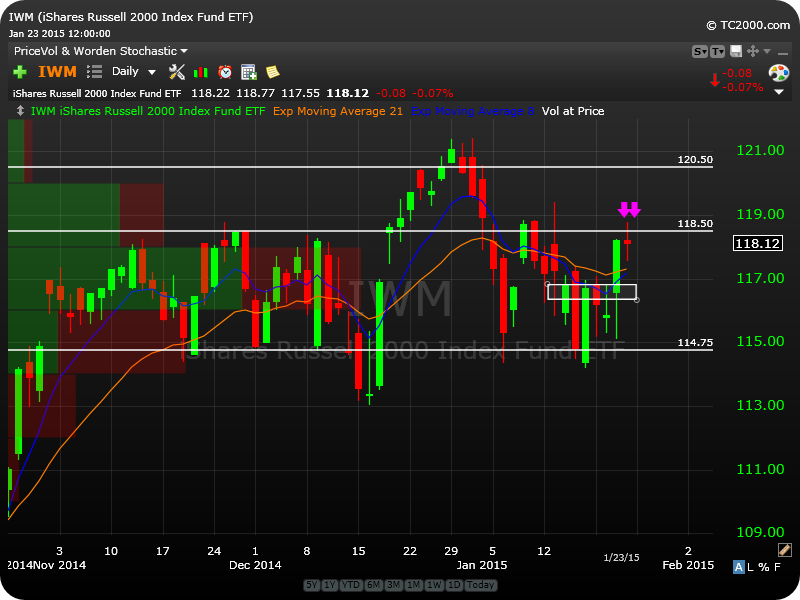 $IWM looking at a daily chart here to smooth out the recent action and you can see we closed just shy of a significant resistance level at 118.50. We’ve been in this range for about 3 months going back to Novemeber 2014 with one false breakout attempt late in December. The $IWM could be the first of the indices to lead the charge for the next directional breakout, and it’s this level we’re testing now that could signal the all clear to the upside. We’re not there yet, but I do have a long position in this via $TNA for a potential breakout. I’ll be quick to stop out if we can’t hold Friday’s lows, and I think the risk/reward sets up nicely here if this market does want to rip higher. My bet is placed, let’s see what next week brings. 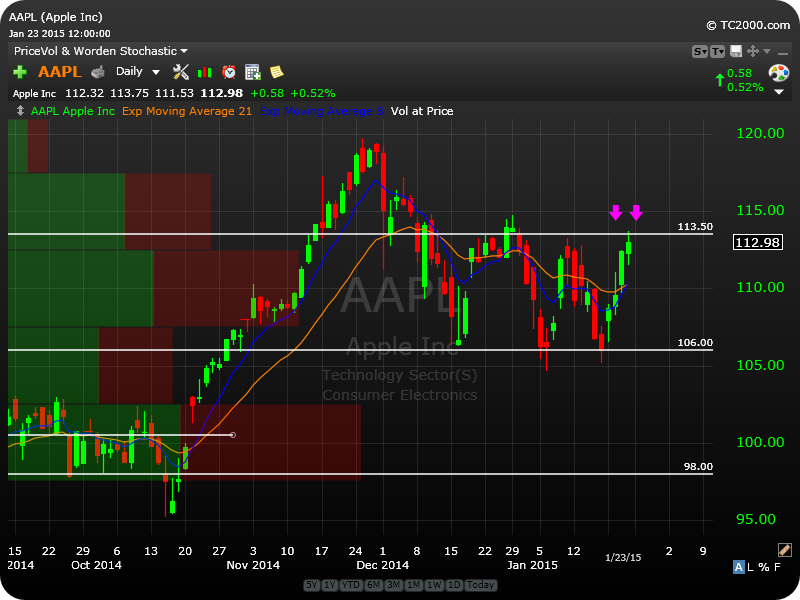 $AAPL back into this slot of resistance at 113 where we’ve stalled out twice before in the past month. Apple has been digesting nicely given the long term run it’s had up to these levels, and with earnings out this Tuesday, I wouldn’t expect price to stick around here for much longer. Not much value talking about technicals with such a big catalyst coming up, good luck to those involved, I personally would expect favorable numbers out of their release, but how that translates to movement, I have no idea. No position. 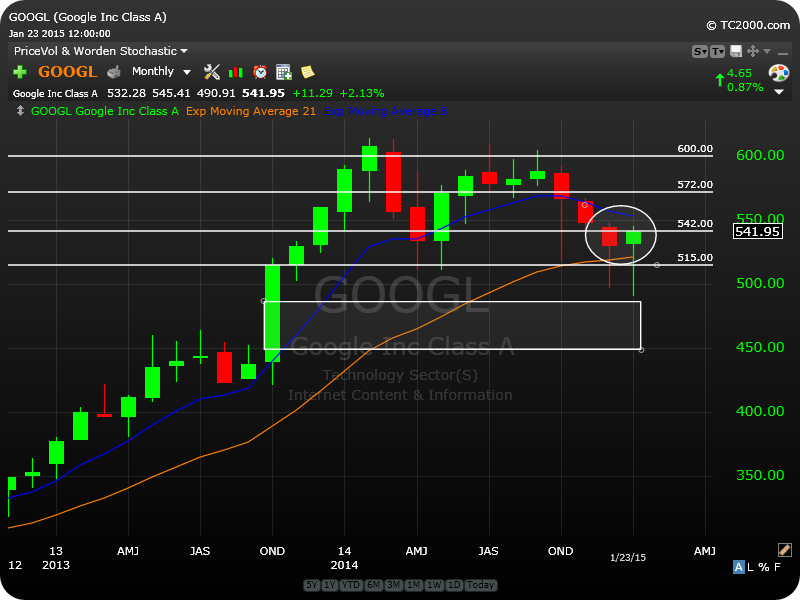 $GOOGL rarely do we look at monthly charts, but I thought it would be interesting to show the big picture of Google after the nice run it had this week. The boxed rectangle is an open earnings gap it had back in late 2013 that the bulls have defended on several occasions now. The recent long tails around this 500 level shows the interest of long term players around that nice round number. One big multi-year consolidation taking place in Google that could result in sideways action for much longer than many expect. Not a very interesting name to me anymore, but it’s worth keeping on the radar for the occasional trade setup. 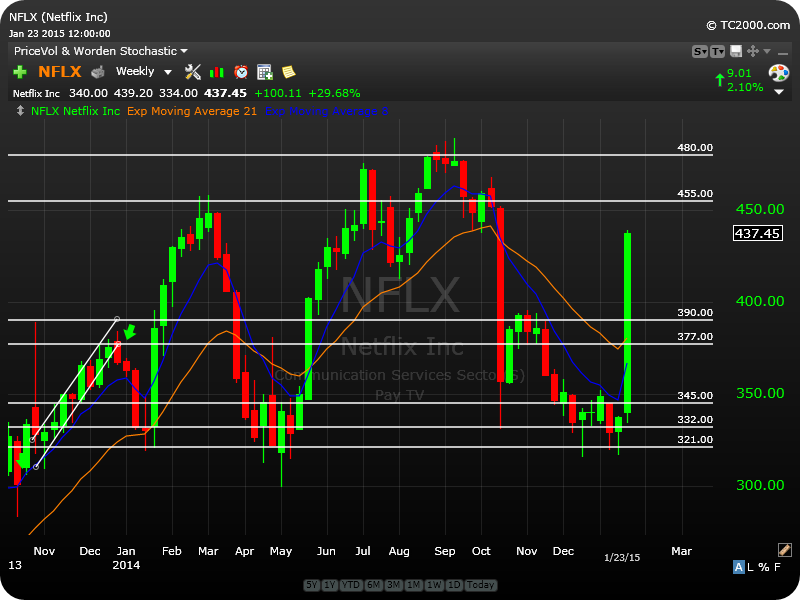 $NFLX a weekly chart of Netflix after its 30%, $100 move post earnings. A very impressive move that sent the stock trading from the bottom of this wide range towards the top. I wouldn’t be surprised to see momentum continue into the 450s and at that point some overhead supply is likely to slow down price. Is this forming one large head and shoulders topping pattern? Certainly possible, but there’s no way to know right now. This range has been real wide over the past year, and this move sets up another test of the highs to see what the supply and demand dynamics are like up here for the 4th time. Not actionable for me, but looks good for the bulls.