can this resilient market continue its grind?

$SPY i always like to start off my analysis referencing last weeks review, the bull & bear cases at all time highs, so readers can relate to the analysis laid out the week before and compare it what actually took place. This past Monday we were welcomed with a ~1.5% gap down on the the Russian/Ukraine actions that were unfolding over last weekend. Nevertheless, 4 days later, everything was recovered, and then some. We made new all time highs this week and chopped around in a new near term base between 187.50 and 189. We laid out the bull and bear cases for the markets last week and I still believe all of those bullet points hold up one week later. Admittedly, while the markets continue to remain extremely resilient, especially in light of the recent global headlines, I do have a slightly increased level of bullish unease at these new highs. Leadership, breadth, some of the market internals that I pay attention to have some warning signs flashing. Does that mean i’m running out and turning into an uber bear? absolutely not. My opinion means nothing if the market clearly exhibits strong up-trending tendency’s. What it does mean is that I have lowered my long positions considerably, and I am more interested in just seeing how the market acts at these new highs for a few days before I add any new positions.  I think price is fairly vulnerable up here, and if we lose 187.50 support we could sink back into the previous range pretty quickly, perhaps this upper level range is a bull trap? Again, I don’t want to predict price, rather just keep an open mind. If we chop around here and firm up, and then continue higher then so be it, I’ll add some more long exposure at that point. Keep an eye on this upper level range going into next week. 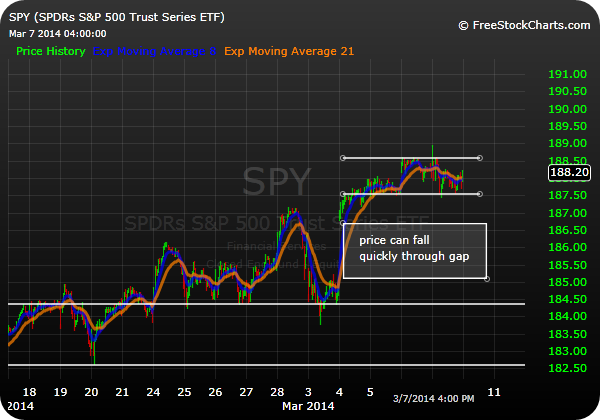 $AAPL so Apple is one of my short positions and for a very simple reason. I’ve identified this 535 level as resistance, and an area that Apple bulls need to clear in order to prove they’re ready to make a second real attempt at pre earnings prices. Just a few weeks ago I identified a short trade in Apple from 547 and covered the position at 533, you can read about it here. Ironically this week I re-shorted the stock at 533 right where I covered it last time around and i’m taking another shot at the short side using a stop at a clear breach of this weeks highs, basically a close 535+. 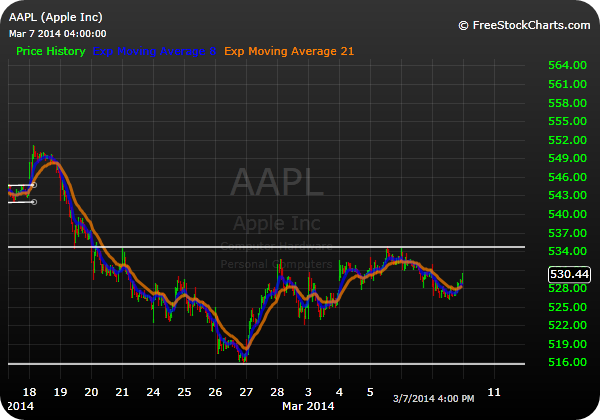 $GOOG held exactly where it needed to on Monday, more or less the $1200 round price support and bounced right back to all time highs before failing and rolling over a bit into the end of the week. Levels in Google are clear, 1195 – 1225 in the midst of a powerful uptrend on the daily+ timeframes. 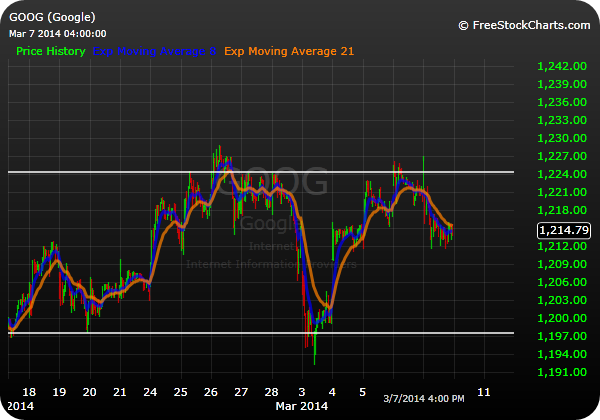 $NFLX another name that continues to march higher in 2014. Some early double topish rounding action going on at 456 but we have long term rising trend line support about 10 points lower at 445. Netflix continues to churn and grind higher week after week despite some otherwise choppy action. Not a name I have touched in a while, but its certainly been making its  long term bulls happy. 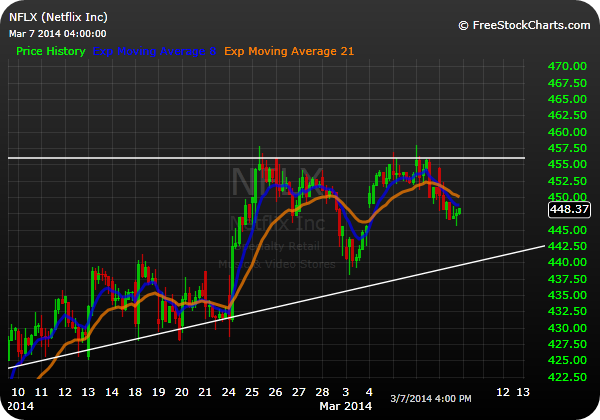 $FB seems like Facebook is just hell bound on getting that $100 price tag in 2014. Another long term trend that is continuing to reward patient bulls. Near term we did find resistance at previous all time highs 71.40 but overall this is still a monster stock. Wide risk range here, 66.50 to 71.50, trade accordingly. 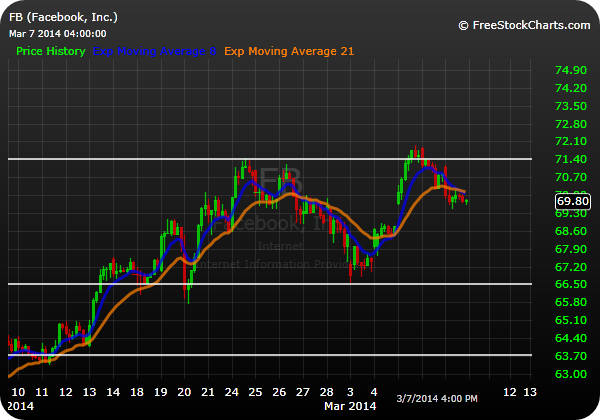 $AMZN finally cleared the 365 resistance level I have been mentioning for weeks now. Unfortunately for Amazon there is a second intermediate resistance level at 375 which coincides with the entrance to the earnings gap back from 1/31. Keep this on watch for continuation this week if the market acts well. It just did some heavy lifting at 365 which could set it up nicely for higher. 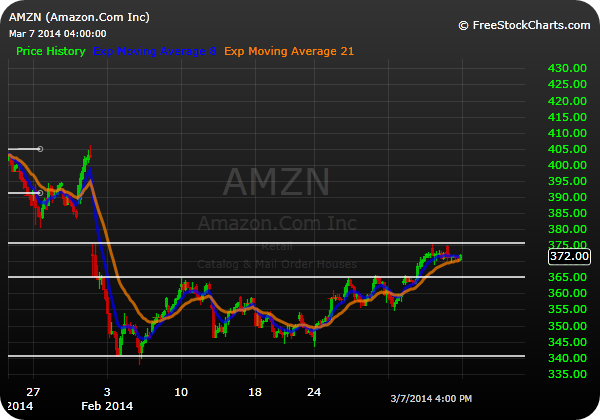 $TSLA finally looks like its spending some time digesting this powerful trend back to new all time highs. Tesla could use another solid week or two going sideways up here in order to set up a very constructive looking continuation pattern. Learn to love these tight extended consolidations, they pave the way to outsized directional moves. 236 – 260 is the near term range to watch. 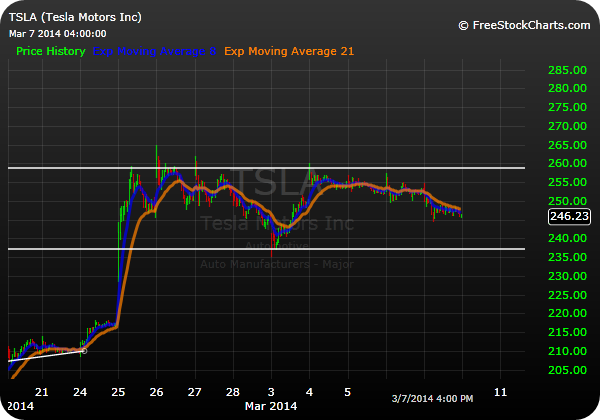