$SPY the market tried to continue the uptrend on Monday by pushing to new highs to start off the week but the bulls could not hold onto the gains and instead we began the week printing a bearish gravestone doji which set the scene for continued selling pressure for the remainder of the week. In last Sunday’s weekly recap I recognized the market was extended in the near term and mentioned 194.30 or so was the closest short term support level to look towards if we began pulling back. We lost that level this week and prior support became resistance as demonstrated by the market’s pause at that level on Friday while trying to bounce higher. The series of higher lows from two weeks ago has now transformed to a series of lower highs as this now 4 days and running downtrend is in place. Friday’s highs (194.32) need to be taken out next week for the bulls to snap out of this pullback. On the downside we have Friday’s lows which could offer some support and below there we would need to look towards 192 to hold. Intermediate term this pullback is very healthy, especially if Friday’s lows is the extent of retracement. Let the market tip its hand and prove to us that it can take out a previous high before aggressively getting long this again and on the downside you can look for further weakness so long as we stay below the previous pivot lower high. 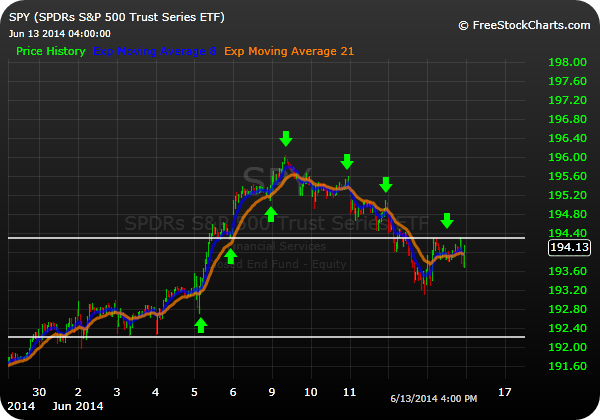 $AAPL is notorious for bucking the overall market trend and trading in its own universe but that was not the case this week. Apple also pulled back from a powerful bull rally it is has been in and broke some short term support levels. 92.25 or so will be a level where we can expect to find some overhead supply and that will be the first test for the bulls to regain control of the momentum. The longer Apple trades below 92 the more in danger it is to continue to slide into more intermediate term support around $89. This pullback so far seems very orderly and constructive and I wouldn’t mind seeing Apple fall another $2 into support before setting up a potential bounce.

$FB a name that finally gave us that igniting breakout that I have been anxiously awaiting for so many weeks now. I did get long on Tuesday as it began clearing $64 and it looked like it had potential to really run based on the looks of Tuesday’s candle. Unfortunately my long swing did not last as long as I would have hoped and I found myself exiting the trade on Thursday as it began violently breaking near term support. We can see it spent the rest of the week basing at the breakout level just above $64 a share and it seems poised to make its next directional move early next week. Facebook is still hanging on to a critical level but I would really like to see it start clearing $65 a share to get back involved on the long side. A break below $64 would confirm the failed breakout and would put Facebook in danger of trading back in the previous multi month range. I’ll be watching this one close next week for my trigger. 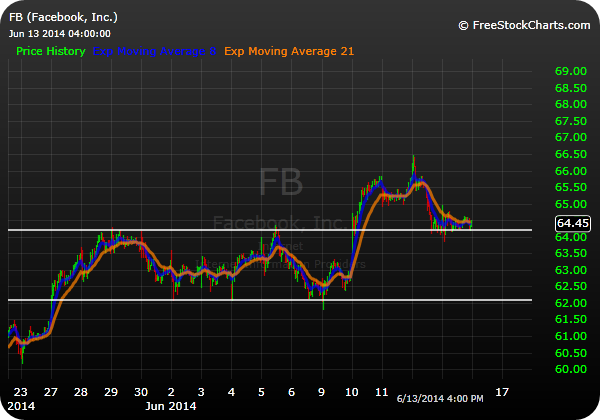 $TSLA held tough this week trading in this flag-like channel near the upper end of this larger trading range. I like the relative strength in Tesla this week and this is #1 on my watch list going into next week for a potential breakout play. Above 210 would get me initiated on the long side and a great add point would be on a break above $218 which would mark the first time Tesla has traded above there since the end of March. On the downside if we saw Tesla break down from this channel it’s in danger of retesting the May lows down around $180 a share. No trigger no trade, so keep this on watch next week. 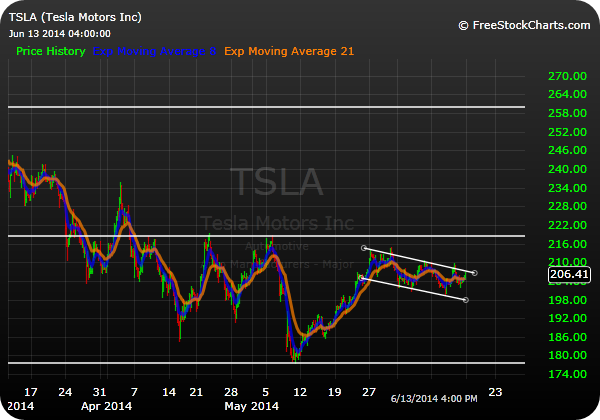 $TWTR here’s a name I don’t typically include in my recap but Twitter has been offering some nice clean trades as of recently. After getting pulverized virtually all year Twitter has been in a nice uptrend for the past couple weeks. The next trigger to the long side would be a break above Friday’s highs of 37.25 and we can also use Friday’s lows to measure our risk against which would be just below $36. If the market can firm up early next week Twitter would be one of the names I would look to capitalize on if it continues to act well. 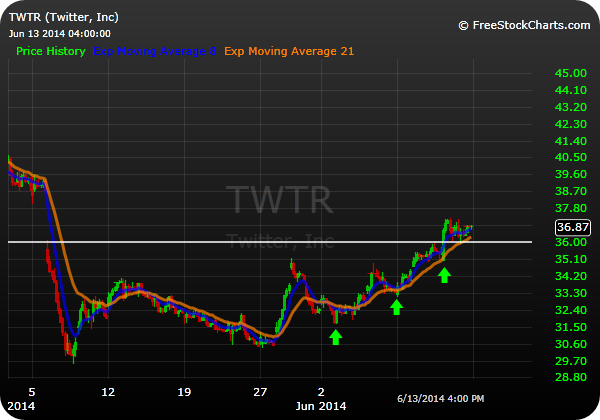