$SPY volatility continued to accelerate to the upside this week as the bearish washout scenario discussed in last weeks market recap played out. Once the 191 level was taken out there were no more near term pivots of support to help the bulls prevent an accelerated sell off to the downside. We managed to trade sub 182 levels on Wednesday which essentially was a straight line drop from $SPY 196 which totals a 7.14% percent decline in 5 days (pretty vertical for the index).  But it was that flush that set up an impressive bounce as the bulls carried us 66 handles higher (in $SPX terms) by the close of the week on Friday right back to this band of resistance between 189-191. So the downtrend continues, however we did see at least some short term capitulation this week down around $SPY 182 suggested by how vertical price got both on the down and upside. Is it the THE low? No idea. But it’s certainly our new point of reference going forward. So we’ll want to monitor this 183 to 191 range next week for any clues as to the intentions of the market going forward . If we can put in a high level base near the top of this range next week, and then make a run on 191, the bulls would be in good shape defending these lows. On the other hand if we come into next week with a gap lower and trade back toward 182 lows then we could be in store for more downside. Also lets keep in mind we’re still in the middle of earnings season so individual names can certainly trade on their own accord after their reports. Goodluck out there. 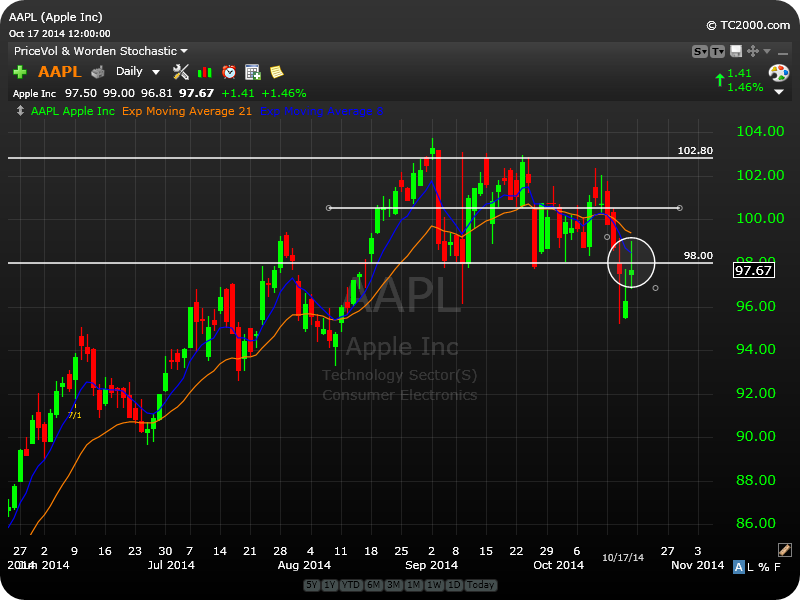 $AAPL last week we talked about how well Apple had been holding up amidst the market pullback and at that time we were still holding above 100 and the midpoint line within this range. It’s usually only a matter of time before the selling during market corrections eventually broadens out to even the strongest names and that’s what we saw this week. We came out of the gate selling off, breaking below 100, and then continued to flush lower below larger multi-week support at 98. The buyers fought to stabilize the stock into the end of the week but they were unable to get a close back above that key 98 level. Inside of the Trade Risk premium service we were able to get into our short above $99 and cover most into $95-$96 the very next day. I would love to continue to press shorts so long as this holds below $98 but with earnings out on Monday this stocks at the mercy of a fast move on a coin flip. Best of luck to all those involved, I will quietly sip my apple juice on the sidelines just watching the show. 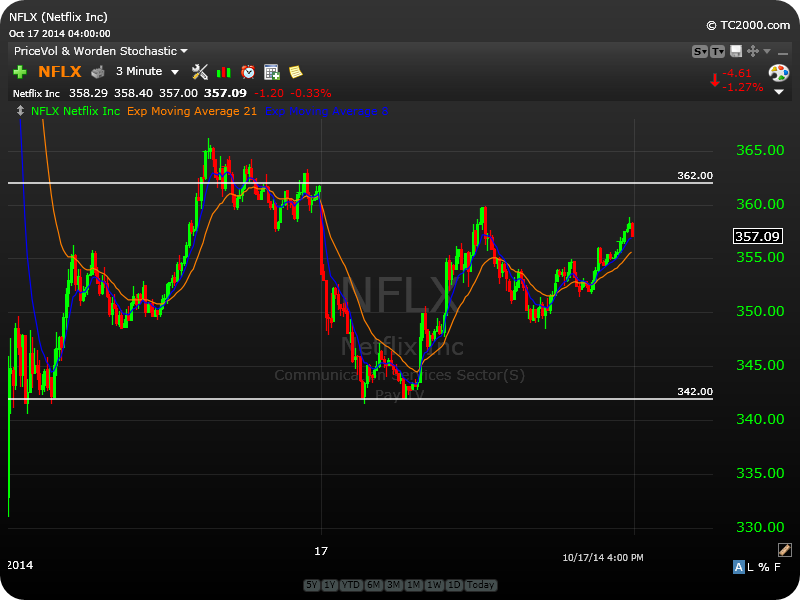 $NFLX boom goes the dynamite. A 20% decline after reporting earnings that disappointed the street. Netflix found support near the lows from April around 330 and is currently carving out a new near range between 342 and 362. Whenever a stock moves something to the magnitude of this amount it certainly suggests the market had something wrong and price is racing to quickly account for the new information. From a technical standpoint, there was a pretty clear volume null between 420 and 340 which is why Netflix had such an easy time dropping $100 off their earnings report, just take a look at a price by volume screen on a daily chart. So let’s take Netflix one day a time, start with this immediate 20 point range and see how price acts near both extremes.

$FB here’s a name that was looking real scary from a technical standpoint earlier in the week but it’s closes that matter most and Facebook had a real nice close if your a bull. It gapped up on Friday above resistance and continued to grind higher into the end of day closing at the highs and right into a heavy level of overhead supply at $76. It’s certainly got its work cut out for it right here but the fact that the bulls already managed to retrace over half of the recent downtrend speaks to some of the underlying strength in the name. It’s tough to want to buy it here but If it can clear above $76 and then eventually make a run on $78 Facebook could very quickly be back in business to the long side. Earnings are not until the 28th so there’s still over a full week of trading before any numbers come out. Early signs of leadership right here, can’t buy it here and now but on watch.

$BABA i’ve been patiently watching this one since its IPO waiting for my trade setup to develop and I thought Friday might be the day given the opening prints but we can see the bulls couldn’t sustain $90+ prices for very long. This ones still not ready, but it’s as close as it’s ever been. I’m waiting for this to hold above $90 for more than a couple hours and then make a run up and out of this band of supply. I still believe this one can move fast when it’s time to go, so don’t forget about it for too long.