sluggish leaders and what to look for into EOY

$SPY we saw our first back to back two consecutive red days in the SPY on wednesday and thursday of this week since october 8th, 17 trading days ago. This finally created a slight pause in price advancement in what otherwise was a very bullish October month. I drew fibs on the recent impulse leg higher and you can see the lows from this past week were right at the 61.8% retracement at 175.30ish. If you are a bear in this market I think you got two things to hang your hat on this week. First is just the general price action and slight pullback we got in the indices. These are minor signs that really have not done any technical damage but are still signals that could potentially lead to further short term weakness. Secondly and slightly more important is the abundance of sloppy price action in individual names, particularly the YTD leaders in this market. The price action in Netflix, Tesla, Facebook, even Apple recently are just hints that we need to keep our eyes open going forward to be sure more weakness does not ramp up in these important names. Now taking the other side, the bull case is certainly the one that is much stronger right now. There has been virtually no technical damage done, the leaders are merely experiencing “sloppy” price action, and really the cause is mostly attributed to their individual earnings reports which naturally elevates volatility. The bottom line, overall I remain bullish but I am watching the leaders closely this coming weak for any further signs of weakness. I took on a little long exposure on Friday looking for these lows to hold going into next week. 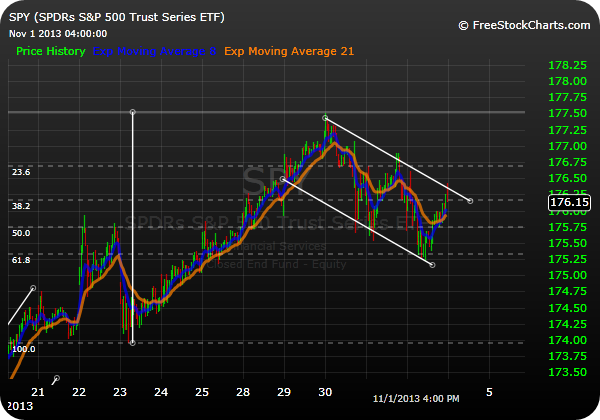 $AAPL hanging in there after their earnings report on Monday. It seems we got a little something for both the bulls and bears in that report and I think the price action accurately represents that. You have to keep in mind Apple saw a nice run higher into their report so it was hard to expect an acceleration to the upside without absolute blow out numbers and extraordinary future guidance. I am not really too interested in Apple one way or the other at this level, overall the price action is just too sloppy and filled with indecision. I would prefer to see it sell off closer to the 500 level to consider a dip buy OR a rally back above 525 or so for a breakout momentum leg higher. Until then I’ll stick to day trades and monitor the action for a swing setup. 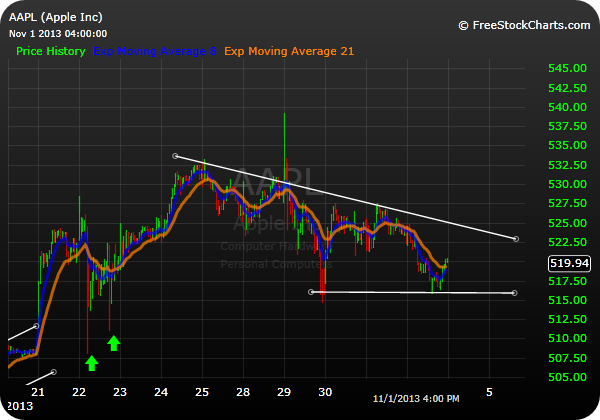 $GOOG continues to chug along nicely in a relatively constructive manner ever since the earnings report a couple weeks back. It’s beginning to carve out some pretty clear horizontal support and resistance levels and so long as it can keep stair stepping higher its tough to be a bear in this name. I did pick up a small position near the close around 1027 and ideally I would like to see it hold this higher level support at 1025 going into next week for a move back to the highs at 1040. The micro levels here are pretty clear , 1040, 1025, 1010, and 1000. 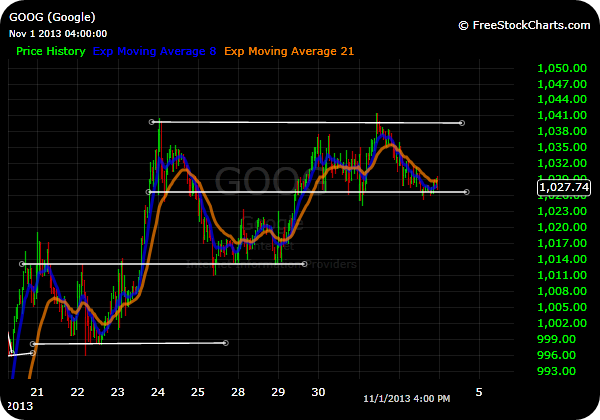 $NFLX a relatively bullish week for the Netflix as it probed lows early in the week below 310 before reversing and closing near the highs right around 330. The larger picture shows price contained within this rising channel and I believe if Netflix can clear this 335 level we could see price accelerate to the upside as it clears the important intermediate term resistance. It was certainly bullish action in this name on Friday as it gapped higher and held it throughout the day. In addition to my Google long I did pick up some Netlix as well right around 327 and I would like to see the bulls defend the open gap from Friday going into next week. 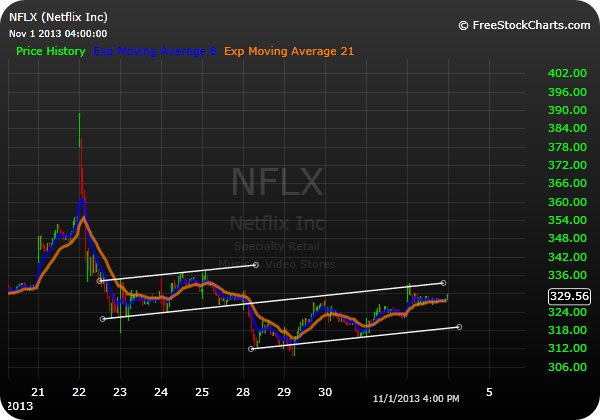 $FB saw a healthy dose of volatility post ER as price initially jumped as high as 58 after hours on thursday before going roundtrip and finishing the extended hours session back to red, sub 49 dollars. However come the opening on Thursday the bulls stepped up to the plate and bought the dip all the way up from 47 to 52 before finding resistance. Going forward I think it will be important for the bulls to hold onto the levels they supported on Thursday and try and put in a higher low above $47 to stabilize the action and bring back the momentum to this leader. I like the action on thursday but I need to see more proof it was not just a 1 day event. 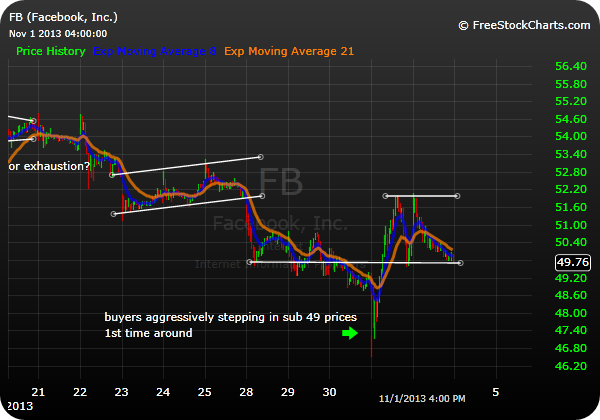 $AMZN zooming out at the price action in Amazon not a whole lot has changed since their earning report last week. The stock is still going sideways digesting the gap higher and it seems difficult to predict which direction this one one will break. Staying patient and watching for some type of resolution to this sideways channel.

$TSLA here is another name that saw some selling pressure this week as it ended in the red however the bulls certainty aren’t giving up without a fight. We saw buyers step up aggressively twice as price broke below 155 and quickly drove it higher back above 160. The action remains sloppy as the bulls fight to stabalize this name. It really needs to break above this descending trendline that has been in control for a couple weeks now. Certainly a stock that is offering opportunity from a daytrading standpoint but its tough to be involved as a swing trader given all of this recent volatility. 155 to 165 are the near term levels to watch going into next week. 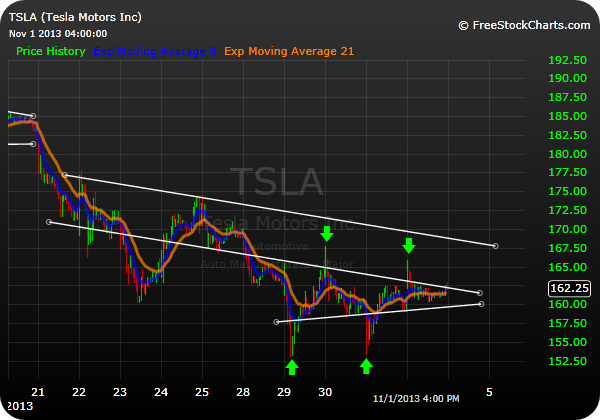