so much noise so little movement

$SPY lots of noise this week but after everything was said and done we ended just about where we closed last Friday at 168.94. We got slammed coming in on Monday after the government shutdown but we quickly bounced higher testing the midpoint of last weeks range before rolling back over a second time. On Thursday we saw a breach of Mondays lows but the bears couldn’t keep up with the pressure and we saw another snap back higher begin to take place. We ended the week near the highs and we have a nice double bottom in place that could confirm above 169.50. It is a very tricky environment given all of the macro headlines the market can use to push price around as it pleases and not to mention we are at a key inflection point which is attracting more and more eyes to the indices. More eyes means a pick up in volatility, choppy trading, and typically lots of false breakouts or breakdowns. 167 to 169 is your range here but at this point I tend to think it will not be as straightforward as jumping on board a breakout level and riding away to profits. As I mentioned, the more eyes on a market the more trickery and deception that gets lathered on. I DO tend to lean to a resolve to the upside after all is said and done but for all I know it could be another 2 weeks of churning money within a range before a real direction develops. Oh and lets not forget earnings season right around the corner, October is going to be a wild one. 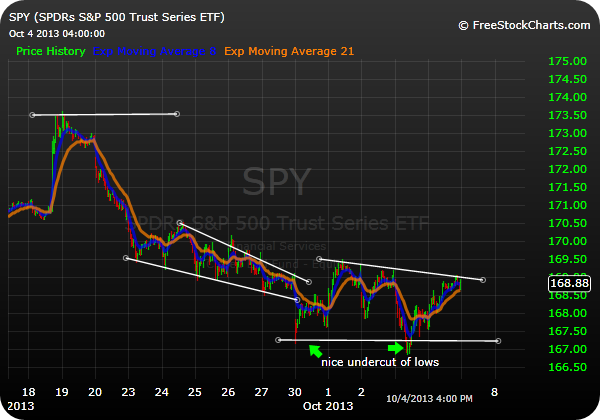 $AAPL has been digesting nicely in this base between 476 and 492 and the way I see it is the stock finally cooling down from the crazy volatility of September which had Apple gapping in both directions and logging many wide range candle bar days. I remain constructive on this name so long as it can hang out within this base but I do think a break and close below 480 will have us retesting the september lows at 450 in short order. Last week we made lows around 476 and on this past Friday we saw price breach below 480 however it was unable to trade below there for much time before buyers drove price back above the 480 mark. I was encouraged to see what could potentially turn into higher low and even a double bottom if these lows from Friday can stick. Of course Apple remains at the mercy of the market and these macro headlines so the uncertainty  here is that much greater. Apple is the only position in my swing account right now and I picked it up on Friday as price broke back above 480 with an entry around 480.60 or so. My stop will remain tight and a close below 480 will have me exiting the position. I am not interested in getting chopped around in this headline driven market environment so I want to keep my exposure as tight and or light as possible. 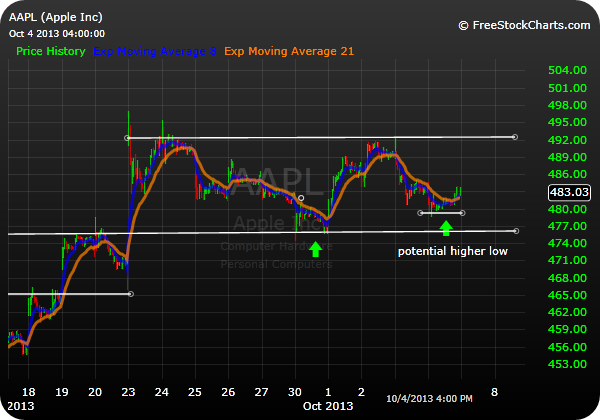 $GOOG also went sideways this week and closed near the lower end of its 870 – 885 range. This name is much less interesting to me given the larger several month range it’s been ping ponging around in with no real direction. 870 however is a fairly important support level which is the only thing stopping it from breaking lower again and tagging the 850 lows from August. Neutral to short bias in this name will have me looking for short opportunities if the market shows signs of weakness early next week. 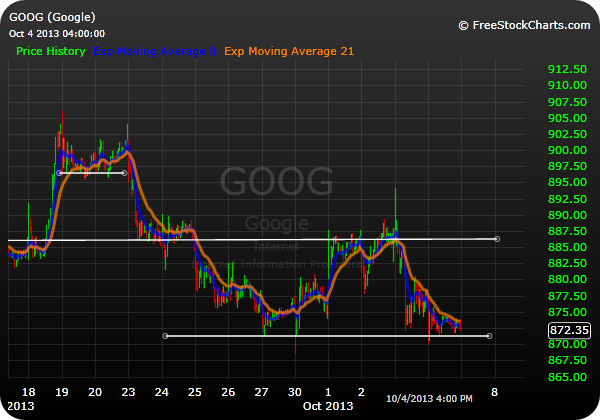 $NFLX completely negating that potent bearish reversal day back on September 23 by breaking higher out of this previous range to new all time highs. The bulls aren’t ready to give this name up just yet as they continue to step up and squeeze whatever bears are left. Just a fantastic momentum story here that remains extremely difficult to do anything but join in on for higher prices. Netflix continuing to do exactly what it should for higher prices and it is one of my favorite long setups into next week. 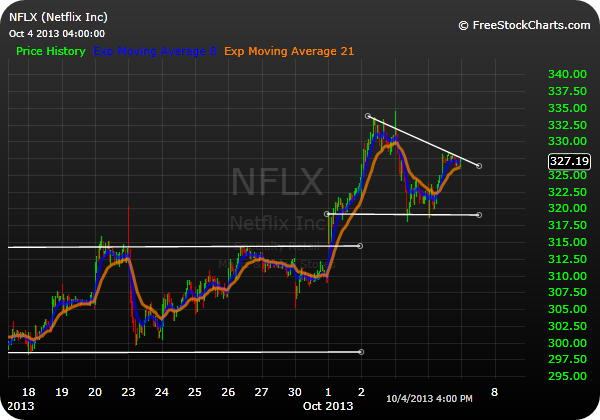 $FB saved by some news after the bell on Thursday, Facebook was threatening to finish lower this week in a nice orderly fashion. I for one was looking forward to some type of retracement so I could get back involved to the long side in my swing account but for now we’ll need to keep an eye on price if it can make its way back to the highs around 51.60. There seemed to be some general acceptance of profit taking above $50 but now that we have another news catalyst here we will have to see if that changes the markets actions at these levels. As I have been saying week after week, this is a name that is continuing to perform well in what has otherwise been a down market environment. Long is surely the path of least resistance. 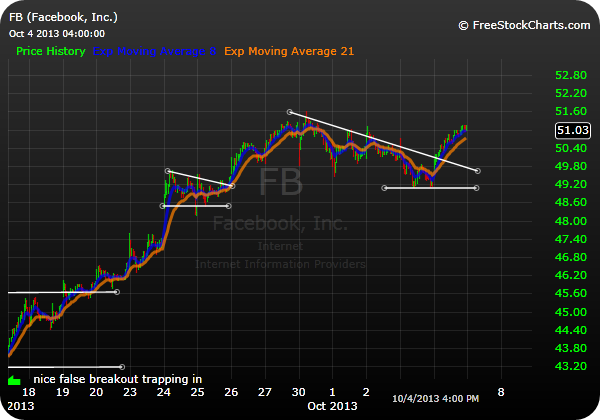 $AMZN continues to put in a nice high level base at all time highs and this is a name that is looking ripe for a breakout or breakdown over the coming days. It has spent over 10 days wedging up against this 320 level which means the energy is being wound up for an impulse move out of this holding pattern. I will be watching this name very closely next week for a resolve in either direction. 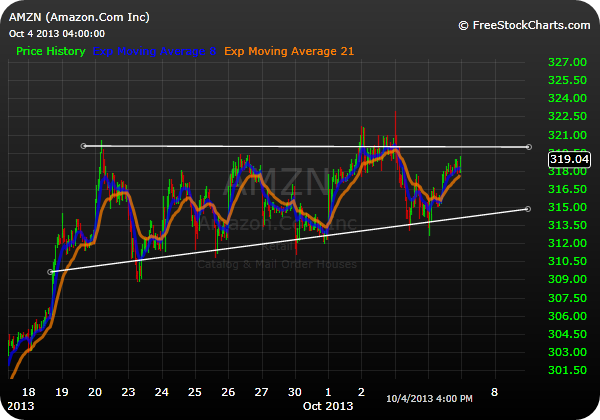 $TSLA  the name everyone was talking about this past week was our beloved Tesla. The picture perfect orderly channel higher from the past week cracked lower and sent the stock falling sharply to levels that haven’t been seen in two weeks!! One other note to make about the breakdown this week was that it came off the heels of news one of their vehicles caught fire.  Regardless of whether or not that story justified the sell off it still caused technical damage and probably rattled the confidence of shaky longs and those that might have jumped on the bandwagon late. Previous support at 170 is where buyers stepped up to buy the dip and they recovered nearly 50% of the move lower by the end of the week. The first real test for the bulls should come in around 185 which is where we topped out in on the 20th and it also coincides with the 61.8 retrace. Sell offs like this are great because it gives you more reference points to assess the commitment of market participants and the overall character of the stock. This should set up some nice tradable opportunities both long and short in the coming week. 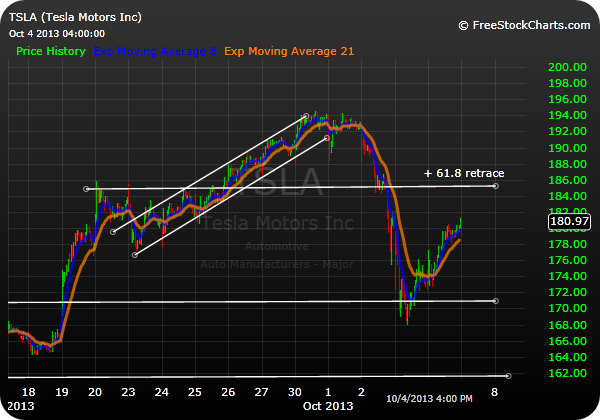