stakes have been raised at recent support 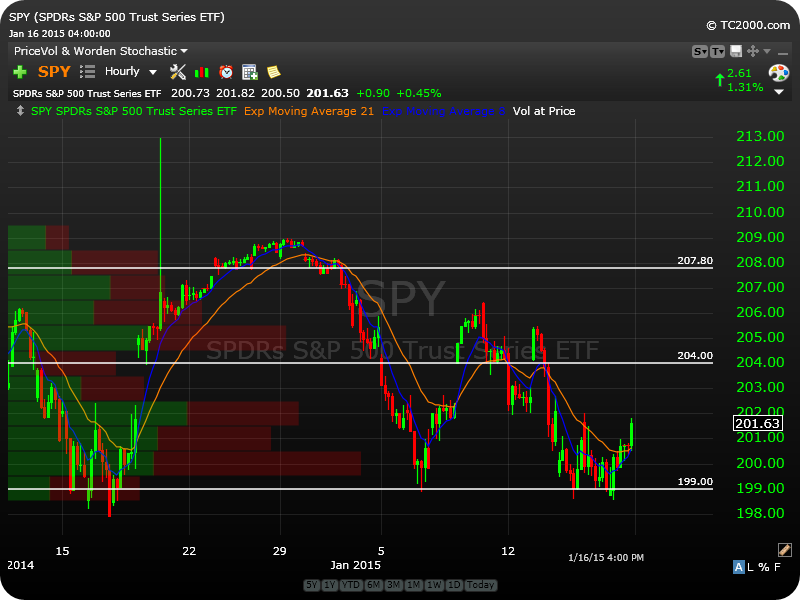 $SPY looking at this hourly chart we can see the bulls are trying to secure a short term bottom at previous levels of support around 199. It’s been a very sloppy and volatile start to the new year for the markets, but if this does happen to be the extent of the pullback (roughly 5% off highs) then it’s a nice win for the bulls going forward. I’m not declaring the bulls victorious here; they still have plenty of work to do in order to prove this is a bottom, but the thrust off this significant level on Friday does put the ball in their court. On the other side of the fence, the stakes at this 199 level have just been increased dramatically. Going forward this year, this area of support will play a key line in the sand for intermediate term players in the markets. The logic is simple, this is the third test on high volume of (198-199) where the bulls have stepped in and bought the market at these levels. If we do break down from here, I would expect a swift and rather disruptive wave of selling to surface. As for my portfolio, I have just two longs on that have continued to outperform during this market pullback — both happen to be biotechs. Bottom line, the environment is still uncertain and 199-204 is the immediate range to have on watch. 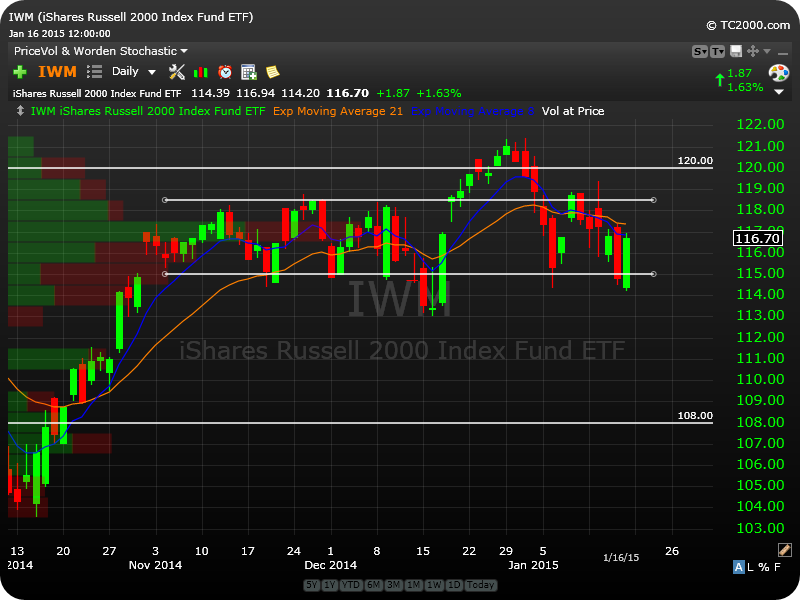 $IWM looking at the daily chart of the small cap index so we can see the significance of the recent lows at 115. This has been support for nearly 3 months now and with each successful bounce off support the importance of this level grows that much more. The 115 to 119 range is very clear cut, and the pressure continues to build for a powerful breakout in either direction. The range here is something I’ll be watching very close going into next week as  I am interested in jumping on board whichever way this market decides to go. Stay patient, on watch. 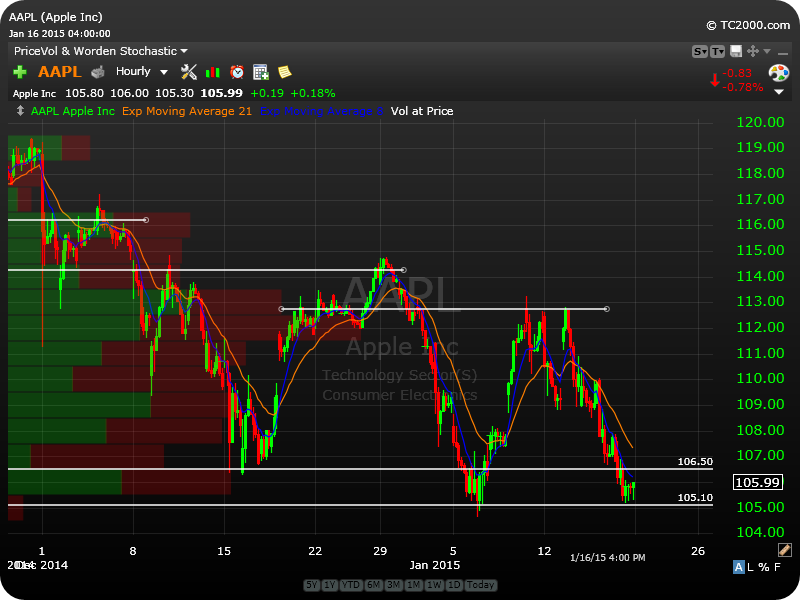 $AAPL the relative under-performance of Apple on Friday is notable as it closed just mildly off of support and the lows of the week. Looking at this hourly chart we can see the pressure building to the downside as lower lows are being put in on each subsequent bull bounce, meanwhile support continues to hold steady at 105. Action here is still very loose and sloppy and not actionable enough for me to take a trade one way or the other, but the lows this week are an obvious level for the bulls to hang onto if they want to stabilize this name. Earnings are out the following Tuesday, so keep that in mind if you’re thinking of taking a position here. 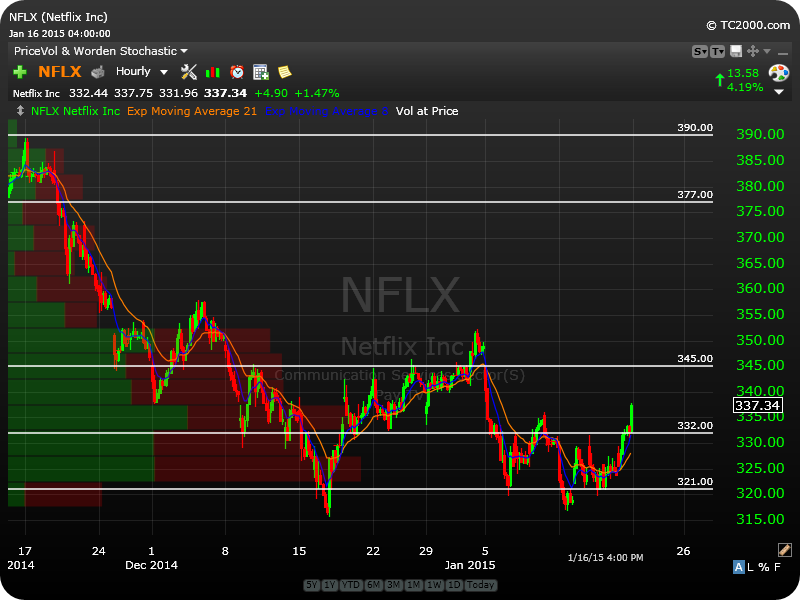 $NFLX last week I wrote about Netflix being one of my favorite short setups but only if it could stay below the bulk of recent supply around 325-330. It tried to break down this week, but it couldn’t stay down for long as the bulls quickly stepped in, saved the name, and cleared some near term resistance. Given the strong close for the week and break of resistance, Netflix does have room to run to the upside. The next level of interest isn’t until about 345, where it should encounter more overhead supply. 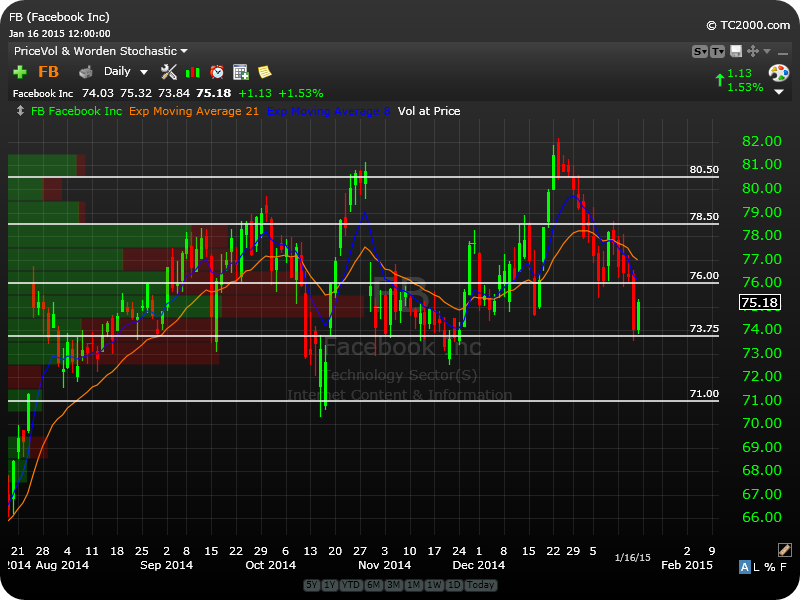 $FB lots of horizontal levels of interest drawn on this hourly chart in Facebook, but I think it’s worth talking about, as energy continues to be wound up in this large holding pattern. We broke down hard from $76 on Thursday but there was no follow-through on Friday’s session. We’ve been trading within an 8 point range for about 6 months in Facebook and the breakout direction out of this range will be very critical for the intermediate direction of the stock. Earnings aren’t out until the 28th of January, but perhaps that will be the catalyst for a move under 72 or above 80. Until it can break the larger range at work here (72-80) it’s just not all that interesting. Stay patient, a move is coming.