stocks into the new year – thanks for a great 2013

$SPY look at this picture perfect bullish channel the indices trended within this week. Smooth action higher as suggested as a likely scenario from last weeks recap, prepare for light vol, bullish bias year end. We remain in a [generally] bullish seasonal period in the market place coupled with a lull in overall macro and company specific news stories. Although that won’t last too long as analysts and investors get ready for earnings season later in month of January. Until then however, there doesn’t  “seem” to be much in the way to de-rail this current rally. Although it is important to note while the indices paint an overall picture of tranquility in the marketplace we saw, Friday, some high beta stocks get shaken up going into the end of the week. So as always, we need to manage our risk and never get caught flat footed in a period of complacency.

As the year winds down I hope everyone takes some time reflect on the things they did well and not so well this year, in both their trading and personal lives. I generally dislike using a new year as an excuse to abruptly change ones lifestyle but I think it offers a good chance to stop and reflect on such things. I wish everyone the best of luck trading in 2014 and I hope everyone had at least one positive takeaway from content here at The Trade Risk this year. If you haven’t already check out my recent post, the four lessons learned from trading in 2013. 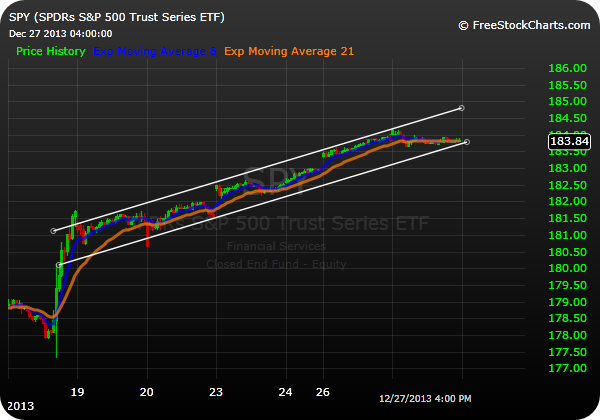 $AAPL christmas came early for Apple shareholders as the stock gapped up $20 going into Mondays session off the confirmed China Mobile deal. I was lucky enough to be long over the weekend and I took my shares off on Monday afternoon as we pushed back to the early morning highs around 569. A $20 gap overnight off of news we basically already knew was coming (at some point) would be foolish for me (based on my style and time horizon) not to lock in at least a piece of my gains. Regardless of whether or not I think momentum could continue higher I believe you have to lock in at least some profits into moves like this and then just watch how the market digests these new higher prices. I have no problem getting back involved at a later date at the same price (or higher) than where I sold on Monday so long as I see continued signs of healthy consolidation and indications the trend is continuing. But for now, we have no idea at this point whether Apple will fill this gap or not so until the next entry sets up I will be day trading it or on the sidelines. 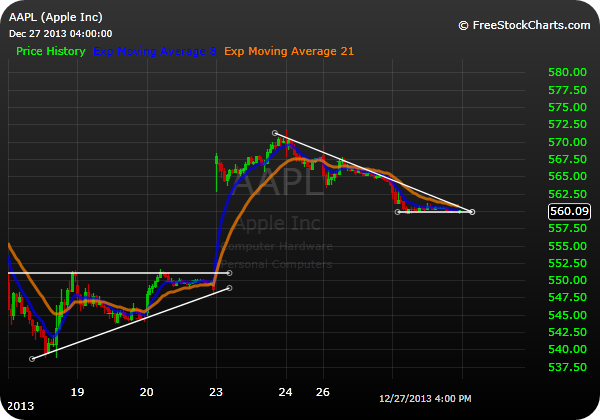 $GOOG more of the same in Google this week, grinding out higher prices. All time highs, and taking care of business in a very ping pong overlapped melt higher. Not to much else to add, watch the upwardly sloping price channel for any changes of character, otherwise, grind on. 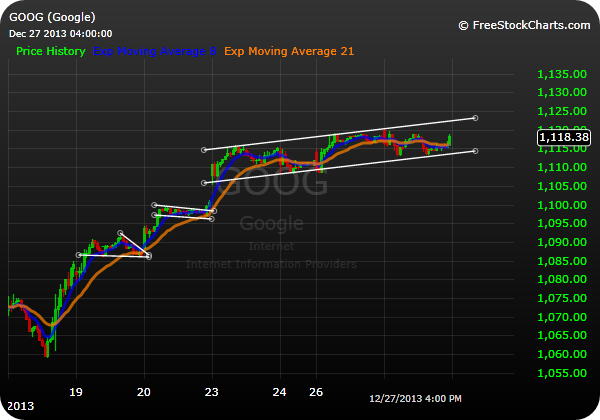 $NFLX i expanded out to a 3 month chart here of Netflix so I could more clearly demonstrate the rising channel price has been trading within since late October. We can see after Fridays action we got the first close out and to the downside of the channel since it originated back around $315 a share. This is something we will want to watch closely next week to see how this stock reacts to a possible breakdown and longer term change of trend. Can the bulls immediately recover this breakdown or did Carl Icahn start unloading the second half of his shares again at the 380+ levels he originally sold into on the last earnings pop? Time will tell. No position here. 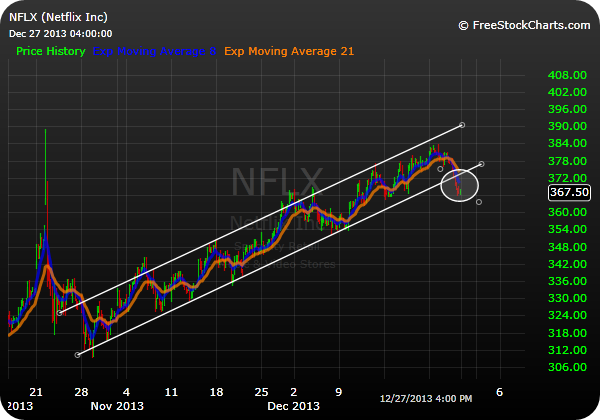 $FB displaying the 1 month chart here in Facebook to better illustrate the breakdown we saw on Friday (similiar to Netflix). After an enormous December run for the stock we finally saw Facebook breakdown from a horizontal base rather than break out to the upside. Momentum seems to be picking up to the downside and $54 level should be the next real support the bulls will need to defend. Longer term the bullish trend is still fine, shorter term it has some work to do. 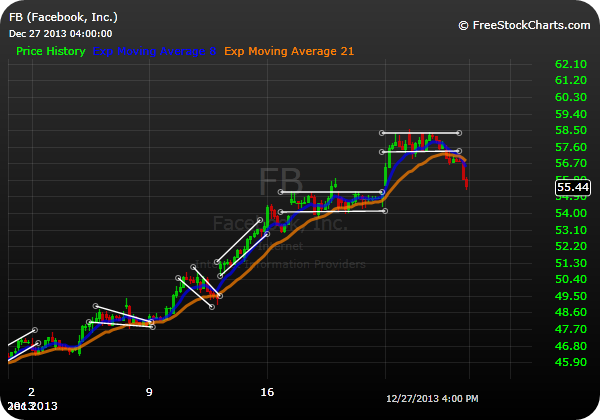 $AMZN stalling a bit here at the big round $400 price level. The stock is balancing within this 395 to 405 range and we have yet to see whether or not this will follow the path of $NFLX and $FB and breakdown or continue grinding higher like the $SPY and $GOOG. This $10 range is tradable until its not. 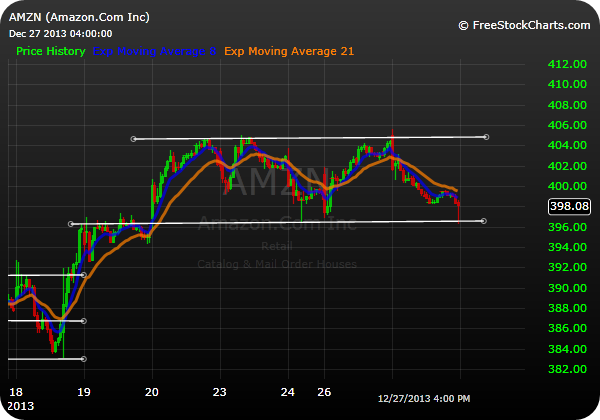 $TSLA large gap up on Monday put Tesla in digestion mode for the rest of the week. Price traded out a pretty clean head and shoulders pattern and the stock closed Friday nearly at the weeks lows however maintaining entirely the open gap from Monday. If the stock loses 150 it has a pretty clear measured move to fill the gap. Time will tell, for now its in an intermediate term uptrend sitting on short term support. 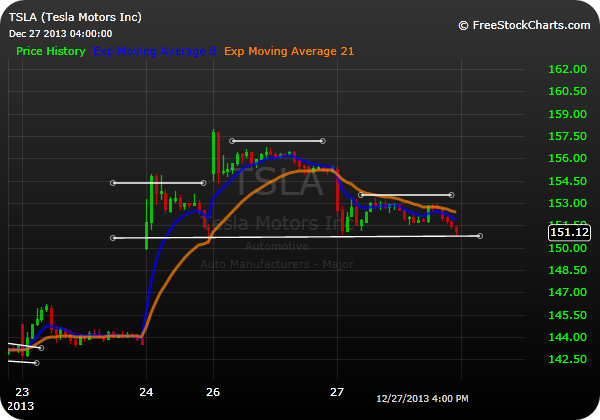