summer volatility on the rise

$SPY we saw some volatility this week in the indices and even more so in individual names as macro headlines about Portuguese banks and FOMC policy dominated the flow of markets. Below is a 60 minute chart of the $SPY where we get a clear view of price structure for the past month. The market is still in an uptrend making higher highs and higher lows as we closed this week with the bulls attempting to confirm a new higher low and muscle back to previous all time highs. So despite the early volatility the dips are continuing to get bought as bulls will not give away this trend so easy. We are entering the bulk of earnings season next week and that can be the catalyst for a lot of movement in individual names. For this intermediate term trend to be broken we would need to clearly lose this weeks lows below 195. Until then however, the uptrend continues to be your friend. 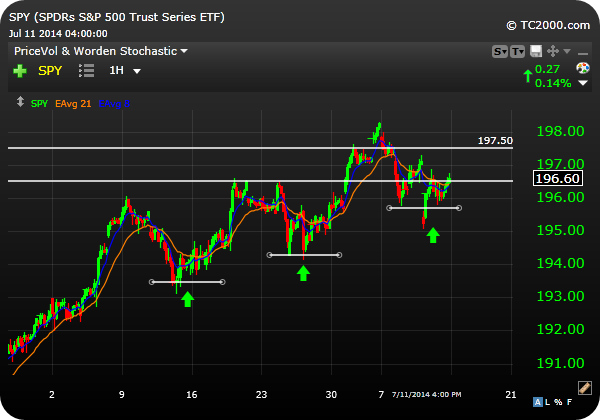 $AAPL is battling it out within this wide, near 2 point range between 94 and 96. There’s really not a whole lot to analyze in this chart beyond identifying this range within the context of an uptrend and we’ll want to be on watch for a breakout or breakdown from these levels. Its certainly possible Apple continues to develop this range into it’s earnings release. On watch. 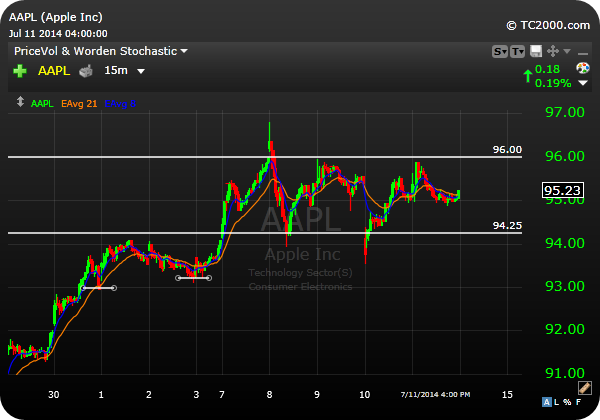 $FB one of the names that experienced some elevated downside volatility earlier in the week as price came crashing down into the 62 support. It looked pretty ugly for the bulls at that time as Facebook was threatening a rejection back into the previous spring range (55 – 62). However, the bulls pulled out a furious snap back rally recovering most of the sell off by the end of the week.  Facebook looks good for continuation to the recent highs at $68 so long as price can keep above $64-65 a share.

$AMZN i’ve been all over this name recently posting charts of the longer term inverted head and shoulders pattern on the daily charts looking for that 338 upside breakout. It wasn’t until after a mean shake out early in the week that we saw a large gap and go take place on Friday causing a buying panic and squeeze above the breakout level. I was stopped out of my long on the flush lower earlier in the week but I did get back involved on Friday long and I will continue to hold onto my position until proven otherwise. Amazon looks great for higher so long as it can hold onto the breakout level and open gap.

$TSLA continues to be a weak name as of the past few weeks and its trying to flag out here and stop the bleeding around this 218 level. The initial intermediate term igniting breakout occurred closer to the 205 mark so the bulls really need to step up and defend this 218 level if they want to keep any momentum in this uptrend. In the short term the trend is down until proven otherwise and we could get a new short entry early next week if we see this flag begin breaking down. Keep this on watch, no trade on a swing basis but intraday should provide some nice opportunities. 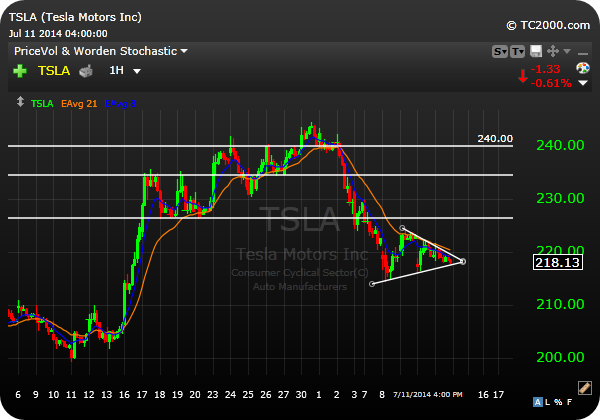